'Less Bad' Might Be as Good as It Gets for Some Companies...
By Corey McLaughlin
Saturday, March 21, 2020

The bars were empty on St. Patrick's Day...

That was the scene here in Maryland, where Gov. Larry Hogan ordered all bars, restaurants, gyms, and movie theaters to close at 5 p.m. Monday.

Last weekend, a bunch of images of college kids drinking together on social media seemed to have sealed the deal. As Hogan said of the decision at a press conference...

The good news is that most people who get COVID-19 aren't going to get really ill...

It's just that vulnerable population of older adults and people with compromised systems or underlying health conditions, that the mortality rate is very high.

We're trying to keep those people from getting infected by all the other people, like the ones who were crowded into bars all weekend.

For a person with some Irish blood, it's tough... On St. Patrick's Day, drinking Guinness at home out of the bottle didn't bring me the same joy as sipping a fresh draft.

But of course, we have greater concerns today...

Take "flattening the curve," for example. Spreading out the number of sick people over a long period of time is critical to not overwhelming our broken health care system. Health & Wealth Bulletin editor Dr. David "Doc" Eifrig wrote more about that topic in Tuesday's issue...

The idea is that there are actions we can take (us, not the government) to help lessen the severity of this pandemic.

When a disease spreads as rapidly as COVID-19, you’ll see a sharp spike start to form. That represents exponential growth.

But if we take preventive measures to reduce the spread, that sharp curve levels out.

In the meantime, grocery stores have empty shelves... No milk... No bananas. It's eerie. Small and large businesses are getting hurt. People are worried about losing paychecks.

It's like a dystopian society. And the worst isn't over yet.

It's strange living in a pandemic economy...

Amazon (AMZN) usually doesn't change its business for anyone. So when the ubiquitous e-commerce giant announced big logistical adjustments, it became one of those "woah" moments.

In an e-mail note to independent sellers, Amazon said it was suspending "shipment creation" to its U.S. and U.K. warehouse facilities for all categories besides baby products, health and household, beauty and personal care, grocery, industrial and scientific, and pet supplies. The company said this policy will run through at least April 5.

As officials have told people to stay home to slow down the spread of the virus, demand has surged for purchases online. And now, Amazon – the industry leader – is making moves to adjust to the stress put on its business.

On Monday, the company said it was hiring 100,000 new warehouse workers and delivery drivers to keep up with demand.

It feels like there are two different economies running at the same time right now...

The airline industry has ground to a halt. Restaurants are getting killed. A barrel of oil is cheaper than a quality bottle of wine. The entire sports industry is doing nothing right now.

And major U.S. stock market volatility is at record levels. The Chicago Board Options Exchange's Volatility Index ("VIX") closed at 82.69 on Monday – its highest mark ever, even topping its levels during the 2008 financial crisis.

At the same time, certain companies – such as those that make cleaning products – are benefiting on "up" days in the market... For example, Clorox (CLX) shares surged 13% on Tuesday, ending the day at a new 52-week high.

But more common in this market, even in sectors with high demand, is that "less bad" might be as good as it gets. Take members-only retailer Costco Wholesale (COST), for example...

As DailyWealth Trader editors Ben Morris and Drew McConnell alerted their subscribers on Tuesday, shares of Costco – which sells us the "basics" like toilet paper, groceries, and soap – are down. They've fallen roughly 8% since February 19.

But as Ben and Drew noted, that isn't bad. Costco is "outperforming the broad stock market by leaps and bounds" and still trades above its 200-day moving average (a measure of the long-term trend). As Ben and Drew wrote, while recommending a potential two-month trade on the company...

The numbers show that Costco is a strong, healthy business. And its shares are performing well during the recent market decline.

The fear, of course, with an event that dramatically shocks supply and demand like a pandemic, is that the creation of products and supply chains – for cleaning products and everything else – could be entirely stopped...

For instance, the United Auto Workers union has called for the Big Three automakers to shut down for two weeks. General Motors (GM) is already offering 0% financing for seven months to encourage buying.

What if Amazon employees decide they don't want to go to work anymore for their own health?

At the same time, the airlines are looking for a record bailout...

On Monday, NewsWire analyst Nick Koziol reported that companies in the industry are in talks with the U.S. government over an aid package that could be worth as much as $50 billion.

The package could include government-backed loans, cash grants, or temporary tax relief. And if passed in its current form, the package would be three times the size of the federal assistance the industry got after the September 11 terrorist attacks.

It's crazy in a way... The major airlines have spent the past decade buying back billions of dollars of stock to boost their share prices. In fact, they've used 96% of their free cash flow ("FCF") over the past 10 years to do so... and now, they're asking Uncle Sam for cash.

You don't know what you've got 'til it's gone.

Pandemics aren't common, but bear and bull market cycles are...

The following chart shows the history of U.S. bear and bull markets in the benchmark S&P 500 Index, along with recessions... 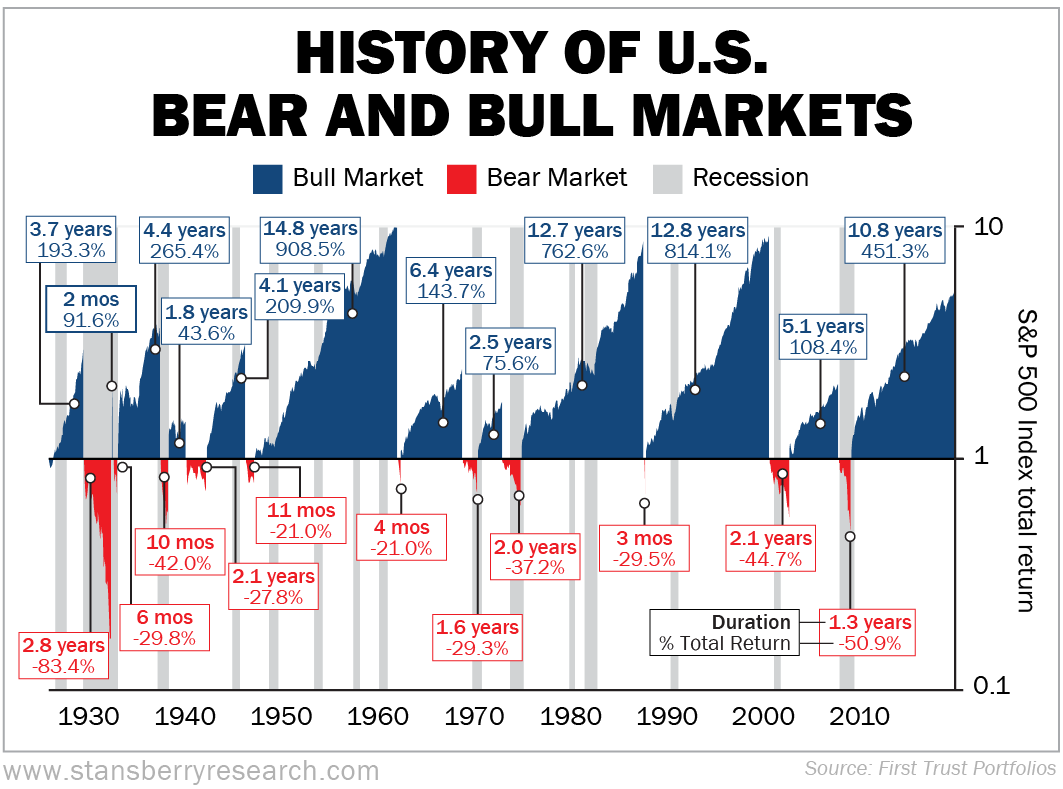 If you're a believer in the idea that history repeats itself to a point, it's important to note that in the above chart, a bear market typically doesn't just start and immediately stop.

Historically, bear markets take months to find their bottoms. According to the data above, compiled by First Trust Portfolios, the average length of the 11 bear market periods since 1926 has been 1.3 years... with an average cumulative loss of 38%.

Now, this bear market was the fastest to arrive in history. The major U.S. indexes fell 20% from all-time highs in just 20 trading days. So you might be thinking, "Won't it rebound in record time?"

Maybe... But nobody knows for sure. The coronavirus has yet to run its course. We don't know how long "normal" life will be disrupted. And that question is driving the markets today.

First off, every investor is different. You have to determine your own goals and risk tolerance... and allocate and make trading decisions accordingly.

Beyond that, at Stansberry Research, we're here to give you the tools and ideas you need to succeed in the markets... And during an emergency briefing on Thursday, our colleague Bill McGilton detailed an investing strategy that could actually help you make money in a bear market.

It's a strategy that's already brought him three triple-digit winners in Stansberry's Big Trade, just since the end of February... during the worst sell-off in the market since the 2008 financial crisis.

It might not fit everybody's risk profile. But given these wild times, we can say it's worth your time to listen to Bill's message and learn about it.

If you missed the free event, you can watch the replay right here. We want to make sure you don't miss anything, especially in today's market.

Editor's note: Our 11-year bull market has ended... But that doesn't mean opportunities to profit have ended with it. On Thursday, Bill went on-air to share a reliable strategy to make money if stocks continue to fall. He also revealed three troubled companies that make perfect targets for triple-digit upside, using this technique... So if you missed it, we highly recommend you catch the replay right here.

One human instinct is likely hampering your investment success. The thing is, when you see this instinct in full force in the markets, it’s likely a great time to buy…

Recent Articles
What the Biggest Drop Since 1987 Could Mean for U.S. Stocks
By Chris Igou
The Fed Has a 'Blank Check'... And It's Not Afraid to Use It
By Corey McLaughlin
The Hidden 'Sweet Spot' of Bear Market Buys
By Austin Root
'There Is No Gold... '
By Steve Sjuggerud
Why Our Next 'Forever Stocks' Opportunity Is Coming Soon
By Porter Stansberry
Recent Market Notes
HIGHS AND LOWS
Monday, March 30, 2020
COVID-19 FEARS HAVE HAMMERED THIS STOCK
Friday, March 27, 2020
CELLPHONE STOCKS AREN'T IMMUNE TO CORONAVIRUS PRESSURE
Thursday, March 26, 2020
THIS OFFICE LANDLORD JOINS THE CORONAVIRUS SELL-OFF
Wednesday, March 25, 2020
RETAILERS FACE MORE WOES AS CORONAVIRUS SPREADS
Tuesday, March 24, 2020
Dr. Steve Sjuggerud
Editor of DailyWealth