Our Best Opportunity in Gold Since the Last Financial Crisis
By John Doody
Wednesday, May 6, 2020

I don't mind telling you... I was scared.

The worst days of the 2008 financial crash were a frightening time. We had no way to know what was coming next. So I acted to protect myself...

For my physical protection, I bought two guns (a shotgun and a pistol) in case there were riots in the streets or an invasion of my waterfront condo building. I had never before owned a gun, but I didn't want to risk the worst-case scenario I could imagine... being unprotected and wishing I had a weapon to defend myself.

I also bought gold bullion... and loaded up on gold stocks.

Fortunately, I never needed the guns. After a few months, the risk of riots had subsided. Nor did I ever have to use my gold coins as currency.

But most important of all, the gains I made in gold stocks ultimately allowed me to pay cash in early 2012 for a double waterfront lot in Fort Lauderdale. Real estate was bottoming, and the lot was selling at a bargain 40% of its original 2007 listing price. I later built on it, and I live there today.

Now, here we are again... We've been thrown into a financial crisis for the third time in the past 20 years.

In this essay, we're going to look at the previous two crises. I'll explain why I think gold is going to skyrocket well past $3,000 an ounce, thanks to one key signal...

When the Fed starts to aid the economy, that's the signal to buy gold and gold stocks.

Cutting interest rates changes the behavior of borrowers and lenders, but it can be slow to influence the economy. Some economists say it's like pushing on a string.

Nonetheless, it was enough to make a difference in the wake of the dot-com bust.

The Fed began cutting rates in January 2001. That was the signal to buy gold and gold stocks.

It took time to see the effects. But by mid-2002, the Fed's actions were boosting some markets. Gold was rising. And the Philadelphia Gold and Silver Index ("XAU") was up more than 50%... while the S&P 500 Index remained mired in negative territory.

That's not all, though. These trends continued, with even bigger gains for gold until the outset of 2004 – three years after we got the "buy gold and gold stocks" signal from the Fed. Take a look... 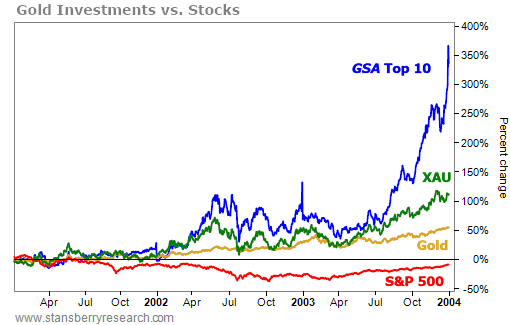 Both gold and the XAU dramatically outperformed the S&P 500, which fell 13% over the same three-year period.

And it was a fantastic time to own top-tier gold stocks. My Gold Stock Analyst ("GSA") Top 10 portfolio of high-quality gold stocks soared 368% over this period... ultimately returning more than six times the gain of gold itself. (Keep in mind, these are independently audited results.)

The next Fed-driven gold bull market began amid the 2008 financial crash...

The Fed continually slashed rates during that crisis as well. But it also claimed broader powers. It realized it could inject money directly into the banking and financial systems by "printing money" to buy bonds. The first round of QE began on November 25, 2008.

That was the signal to buy gold and gold stocks. It was the first of four rounds of QE that the Fed performed over the next few years. 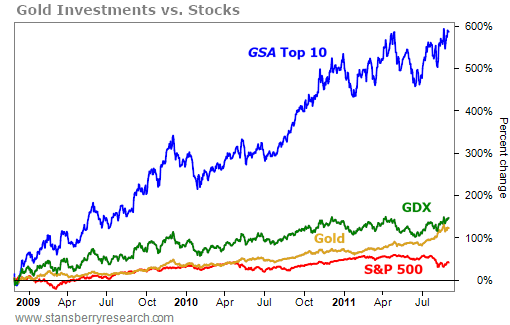 However, gold was up 129% by then. GDX was up 153%. And both lagged far behind the GSA Top 10... which produced a gain of 601%, based on independently audited results. It was staggering outperformance.

Now for the current coronavirus crisis...

The federal-funds rate had been slowly edging higher in recent years, peaking at 2.5% in December 2018. But last year, the Fed lowered rates again. And on March 15, 2020 – with the coronavirus pandemic blooming – it cut the federal-funds rate to 0.25%, effectively zero again.

A week later, Fed Chair Jerome Powell said the central bank would "do whatever it takes" – that is, unlimited QE.

Gold's most recent close was at $1,495 per ounce when he made the announcement. This was the signal to buy gold and gold stocks.

Two weeks later, on April 9, the Fed backed up its commitment and announced a $2.3 trillion loan program for businesses and state and local governments. Gold had jumped nearly 13% since Powell's statement three weeks earlier.

So even if you missed this latest buy signal, don't worry. You haven't missed the opportunity.

History says we can expect a powerful bull market in gold in the years ahead. It could be our best opportunity in gold since the last financial crisis. And if so, now is the time to own high-quality gold stocks... the way to make truly outsized returns as it unfolds.

Editor's note: John has spent 50 years building a proven gold stock system to invest in the "best of the best." Even after the SARS pandemic, the Gold Stock Analyst Top 10 soared more than 200% in a year. Recently, he gave away each step of his process in an online videoconference... Plus, he explained more about what's driving today's gold bull market. You can still watch the video right here.

"This gold bull market can last longer – and rise higher – than anyone expects," John writes. That's because the "Fear Trade" is driving investors today. And it means the right gold stocks are set up for major outperformance... Learn more here.

The Fed has shown it will do everything possible to stimulate the economy. Recently, Drew McConnell and Ben Morris examined how this is playing out in the gold market today... and shared a one-click way to profit. Get the full story here.

Today’s company is fighting to weather the coronavirus outbreak…

Since lockdowns from COVID-19 began, a lot of folks have been sheltering in place through state-mandated orders. They only leave their homes for essential work, groceries, medicine, or to exercise. Add that to state-mandated self-quarantines for travelers in some states, and it means most folks aren’t buying airline tickets today…

Southwest Airlines (LUV) is one of the largest airlines in the world. It has more than 60,000 employees and serves more than 130 million customers annually. But with travel restrictions in place and customers leery of leaving their homes, air travel has ground to a halt. Southwest recently reported a net loss of $77 million. And just a few days ago, Warren Buffett – one of the largest investors in four major U.S. airlines, including Southwest – revealed that his holding company has sold all its airline stocks.

LUV shares have been cut in half since their February highs, recently hitting new 52-week lows. And although some states are gearing up to ease coronavirus lockdowns, Southwest faces a long and uncertain road ahead… 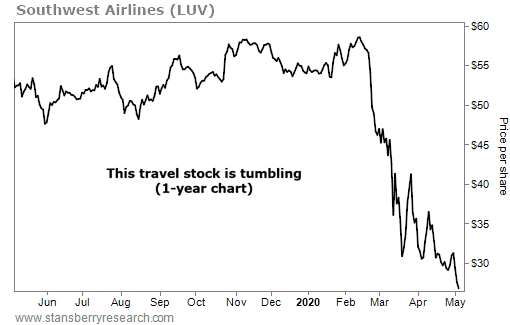 Inside Today's
DailyWealth Premium
Get richer every day by following this wealth-building commandment...

The investing world can be overly complicated. Thankfully, some of the simplest strategies are the ones that create incredible investment success…

Recent Articles
Take Care of Your Risk to Reap Investment Rewards
By Ben Morris
The Revelation That Changed My Life Forever
By Tom Dyson
Leaving the Matrix
By Tom Dyson
This Crypto Is Setting Up for Its Next Bull Market
By Eric Wade
Who Loses When the U.S. Drops China Investments?
By Brian Tycangco
Recent Market Notes
KEEPING GOVERNMENT RUNNING IS A BOOMING BUSINESS
Friday, May 22, 2020
HITTING A NEW ALL-TIME HIGH WHILE FIGHTING COVID-19
Thursday, May 21, 2020
THIS HOT CYBERSECURITY COMPANY IS ROCKETING EVEN HIGHER
Wednesday, May 20, 2020
A SPICE AND SEASONING GIANT STARTS A NEW UPTREND
Tuesday, May 19, 2020
HIGHS AND LOWS
Monday, May 18, 2020
Dr. Steve Sjuggerud
Editor of DailyWealth