Take Advantage of the 'Wall of Worry'
By Chris Igou
Tuesday, December 7, 2021

Stocks should continue to climb a "Wall of Worry"...

The atmosphere has changed dramatically since earlier this year. Individual investors are now fearful. They expect lower stock prices to come, and they fear high valuations.

Those fears are both overblown, as I explained yesterday. But another misunderstood market fear is weighing on investors' minds today...

Again, it sounds scary, but it isn't. It's just another addition to today's Wall of Worry.

The Federal Reserve just started the process of ending its "easy money" policies...

It announced plans to reduce its bond-buying program last month. It has already put the first steps into place. And it has been signaling that interest-rate hikes could be coming sooner than expected, too.

Folks weren't worried at all about rising rates earlier this year. But it's a hot-button topic as we close out 2021. And for good reason...

That's because in a low-rate environment, there's not much competition for stocks... You're essentially earning 0% interest in your savings account. Bonds yield next to nothing. So, if you're looking to earn anything in the current low-interest-rate environment, you have to buy stocks.

When rates start to rise, though, competition for stocks begins to rise. Investors start to see an increasing number of options to earn interest on their capital.

That's why all eyes are on what the Federal Reserve will do next.

According to Fed funds futures contracts, options traders are betting we'll see two rate hikes in 2022. And they expect that we'll see three more increases in 2023.

In other words, the majority of folks don't expect this low-rate environment to last much longer. But does that mean it's time to get out of stocks?

You might be surprised to learn that the answer is no – at least in the short term...

For example, the Fed began raising rates in June 1999. It ultimately hiked rates five more times before the S&P 500 Index peaked in September 2000... And the index still rallied 12% over that 15-month period.

The first Fed hike didn't kill the boom. Yes, the market eventually crashed. But there was plenty of additional upside before that happened... And worried investors who stepped aside early missed out on those gains.

The same dynamic played out before the 2008 financial crisis... The Fed raised rates in June 2004, but that was nowhere near the peak. U.S. stocks soared for years afterward.

There were 17 rate hikes in total from June 2004 through mid-2006... And still, the boom continued. Investors could have locked in 46% gains before stocks peaked in October 2007.

As I hope you see, the bull market will likely continue to climb the Wall of Worry... even as the Fed begins to hike rates.

Even though the S&P 500 is at an all-time high today, the market simply isn't as frothy as it was earlier this year.

Worry is starting to set in... yet the S&P 500 remains in a strong uptrend. You want to take advantage of the good times as long as they continue. So, my advice today is simple... Stay long.

With the recent pullback in the market, it might be tempting to bonds for portfolio insurance. But with interest rates near historic lows today, bonds still aren't the best bet for a meaningful return... Read more here: Leave This Lousy Deal... and Jump in on a Phenomenal Trend.

After a record October for stocks, you might think you're too late to capture any upside. But history shows us that we could see even more gains ahead after moves like these... Get the full story here: A Massive Month for Stocks Points to a 17% Gain.

Market Notes
SELLING PAINT MAY BE BORING... BUT THIS BUSINESS IS BOOMING

Today’s stock might not be flashy, but it produces steady gains that investors love…

Regular readers know that it pays to invest in “boring” businesses. While they may not be part of today’s exciting tech trends, businesses like uniforms and trash collection are always in demand – and they can provide solid returns in the long term. This company is a great example…

Sherwin-Williams (SHW) is a $90 billion paint manufacturer. The company has been around since 1866… And to this day, it’s doing what it does best. From do-it-yourself projects around your home to the current boom in building and renovations, folks need painting supplies. So through good times and bad, this historic business remains as strong as ever… Despite supply-chain challenges, Sherwin-Williams reported net sales of nearly $5.2 billion in the latest quarter – up 0.5% year over year.

As you can see, shares of SHW have soared over the past five years. They’re up more than 280% over that period, and they recently hit a new all-time high. It’s yet another example of why “boring” companies can make solid investments… 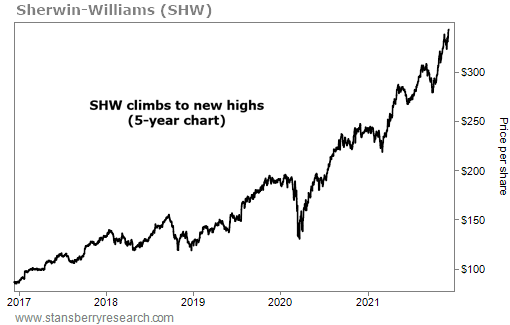