Editor's note: Today, our resident cryptocurrency expert Eric Wade returns to debunk a pervasive myth. In this piece – which he recently shared in the Stansberry Digest, adapted from a June 18 Crypto Capital update – he explains why the U.S. will realize that it can't regulate cryptos... plus, he details why the decentralized-finance revolution is bigger than a committee...

Over the past few months, China has banned crypto mining operations and ordered big banks not to do business with crypto companies. The Federal Financial Supervisory Authority in Germany, known as "BaFin," announced it will be regulating alternative investment funds that want to invest in digital assets like cryptocurrencies. And South Korea's Ministry of Strategy and Finance is launching tax rules and regulations for crypto transactions beginning as soon as 2022.

That's on top of the U.K. Financial Conduct Authority recently saying it will clamp down on major exchange Binance's activities in the U.K.

All of this regulation might sound like a death blow to cryptocurrencies... but it's actually a good thing.

Multiple countries, including Nigeria, India, Ireland, Thailand, and the U.S., have all recently made headlines by offering their thoughts on crypto regulation.

For starters, Swedish Minister for Financial Markets Åsa Lindhagen expressed the need for cross-border coordination in regulatory efforts. These comments come as Sweden continues the development of its own central bank digital currency ("CBDC") called e-krona.

The European Union has set 2024 as its goal for a "comprehensive framework enabling the uptake of distributed ledger technology ("DLT") and crypto-assets in the financial sector."

India's central bank also released a statement walking back warnings from local private banks that cautioned their users against the purchase and use of cryptocurrencies. These cautionary messages cited an outdated three-year-old ban regarding crypto trading, which India's Supreme Court overturned in March 2020.

These actions come amidst rumors of a blanket ban by the Indian government, which may or may not have any real weight behind it.

And Nigeria recently reversed its previous bitcoin ban, which most of the country seemed to turn a blind eye to anyway. Around 32% of Nigerians reportedly use crypto, compared to 6% of Americans. Many thought a reversal of Nigeria's ban was inevitable.

Meanwhile, financial regulators in the U.S. are raising concerns over the volatility of cryptocurrencies and the increasing need for a clear regulatory framework.

That's why the U.S. House Committee on Financial Services has created a digital assets working group. This group plans to look into how to approach digital assets, digital currencies, blockchains, and cryptocurrencies in the U.S.

You see, one of the problems we've had in the U.S. is whether cryptocurrencies can be labeled as property, assets, or currencies. This affects taxable income and capital gains.

Now, I don't expect this group to come up with any definitive answers on how to regulate cryptocurrencies. But I do think it's creating a learning path. I imagine the group is bringing in all kinds of intelligent advisers... and they're going to have a conversation where someone says, "So you're telling me no one's in charge? Then doesn't that mean we have an opportunity to be in charge and sort out some of these rules?"

The U.S. Securities and Exchange Commission ("SEC") has already said it doesn't consider bitcoin a security because it's decentralized. There isn't a controlling body issuing new stock... so the SEC doesn't concern itself with bitcoin. But there are other coins and tokens that we can expect to be treated very differently if they do appear to have characteristics of securities.

Hopefully, the U.S. House Committee on Financial Services will realize it can't be in charge of some coins because of certain characteristics. If it doesn't realize that and it attempts to control decentralized coins like bitcoin, then it will figure out at some point that bitcoin and decentralization are bigger than the committee.

That's a bold statement, I know. But think about it...

Bitcoin is global... it isn't controlled by the jurisdiction of any particular country... and the nodes and mining equipment that keep the bitcoin network running are located all around the world. This equipment can move away from unfavorable countries, which we're seeing right now as crypto miners leave China. If China can't stop bitcoin, it makes sense that no one can.

Now, there are crypto organizations that aren't entirely decentralized. For example, Binance, the largest crypto exchange by volume, has had to relocate many times due to regulatory clampdowns. That's why it's important for projects to look for crypto-friendly jurisdictions like the Cayman Islands, Singapore, or others.

It's impossible for any government to shut down truly decentralized cryptocurrencies, because there is no single point of weakness to attack. And in the meantime, the increasing regulation of cryptos shows that they're gaining recognition worldwide.

As more and more people recognize cryptos as a legitimate asset class, so much capital will flow into the space that picking winners will be like shooting fish in a barrel.

Editor's note: Eric has identified an emerging story in the crypto space that goes far beyond bitcoin. It could help investors generate yields as high as 10%... 20%... even 35%... all while capturing the massive upside of cryptocurrencies with much less risk. You can still get the details for a short time right here.

It might sound crazy, but cryptocurrency investors are willing to hold – and even buy more – despite all of the recent volatility. That's because cryptos are unlike any other asset class on the market... Learn more about what sets them apart here: The 'Lightning in a Bottle' That Makes Cryptos Unstoppable.

It might look like cryptocurrencies are headed for another big crash. But Eric says the "speculative frenzy" has already led to something much more powerful. And that could mean sky-high prices for cryptos... Get the full story here: Why I Expect Crypto Prices to Go Up From Here.

Today, we’re checking in on a company that’s surviving the “death of retail”…

Regular readers know that e-commerce companies like Amazon (AMZN) have changed the way we shop. And many traditional retailers are struggling to keep up as a result. But some companies have found ways to stay relevant. Take today’s company, for example…

L Brands (LB) owns the well-known mall-based retailers Bath & Body Works and Victoria’s Secret, with almost 2,700 stores across North America and several other countries. Many malls are failing – but by upgrading its e-commerce business and skillfully responding to the demands of its specific clientele, L Brands kept customers coming in. Sales rose to $2.4 billion in the most recent quarter… 12% higher than the corresponding period in 2019 before the pandemic.

LB shares struggled early in the COVID-19 pandemic when many non-essential retailers had to close. But they’ve exploded more than 700% higher since their 2020 lows and just hit a new multiyear high. As long as L Brands continues to adapt and meet its customers’ needs, this mall retailer will make it through the “retail apocalypse”… 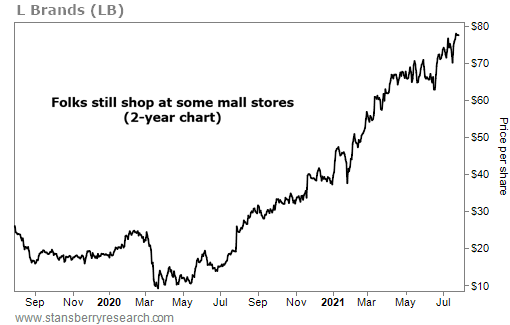