One Reason the Market Rout Will End Soon
By Brett Eversole
Monday, December 10, 2018

The best time to buy is when average investors (the "dumb money") are panicked.

This is exactly what we're seeing right now in U.S. stocks. The dumb money is panicking, and the smart money is as bullish as it's been in years.

Last month, the S&P 500 fell to its lowest level in more than six months. It's no wonder many folks are worried. But those new lows also led to an important change in investor sentiment... one that says the fall in stocks is likely near its end.

Following the market trend is the safest way to make money in the markets. But understanding sentiment can give us insights into major turning points.

Nobody does a better job tracking market sentiment than our good friend Jason Goepfert of SentimenTrader.

Jason tracks hundreds of sentiment measures, including many of his own proprietary indicators. And we're interested in one of his exclusive indicators today – specifically, the spread between smart and dumb money confidence.

To make these categories more useful, Jason creates a ratio of "smart money confidence" divided by "dumb money confidence." This highlights extremely positive and negative opportunities in the stock market.

When the spread is high, it means the smart money is bullish and the dumb money is bearish... which is exactly what we expect to see at a turning point for stocks.

Not surprisingly, sentiment levels similar to today's have marked a bottom in stocks over the past few years. Take a look... 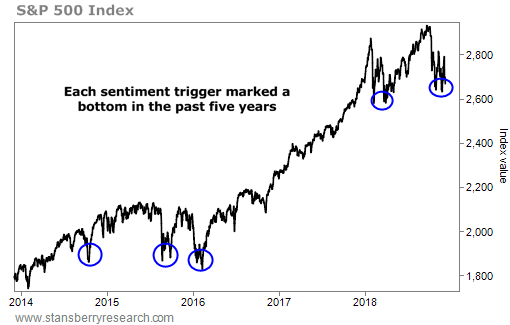 The circles show times when Jason's spread was near today's level. You can clearly see that these were fantastic times to buy stocks.

In total, we've seen Jason's spread come near today's level five other times in the past five years. On average, those instances led to roughly 10% gains over the next two months. And all five opportunities led to profits.

In short, we should expect a solid short-term rally when the smart money is buying and the dumb money is selling... And that's the exact situation we have today.

It's easier said than done. And I understand that it's scary out there. Stocks have continued to fall in recent weeks. But remember that this can't last forever.

We're seeing market sentiment unlike anything that's happened in the past six months. And this spread between the smart and dumb money means we're likely near the bottom.

History says we shouldn't be scared. This is actually a fantastic time to put money to work in the stock market.

"Once investors get used to a one-way market, they forget that stocks go down as well as up," Steve writes. The volatility in the markets has many investors worried... but he says now isn't the time to panic. Find out why right here.

"Many investors now have no plans whatsoever to buy more stocks," Steve says. "This is a huge mistake." Get the details on why missing out on the best days of the market can cost you here: The Best Days of the Melt Up Are Coming.