The 'Great Reversal' Is About to End This 21-Year Extreme
By Marc Chaikin
Saturday, November 27, 2021

Editor's note: In today's Weekend Edition, we're taking a break from our usual fare to bring you an essay from our business partner Chaikin Analytics. Power Gauge Investor editor Marc Chaikin details how the current market environment has pummeled small-cap stocks. However, as he explains, this means what he calls the "Great Reversal" is right around the corner...

Small caps took a 9% tumble from their high back in March.

But below the surface, it was much more than that... Small caps went through a two-decade extreme event.

We’re still seeing it play out. And now, this wild market is in an incredibly bullish setup.

That’s because the data says it will take a massive move in small caps to correct the market extreme we've entered. So, I'm calling this event the "Great Reversal."

What we've seen in small caps since the beginning of the year is more than just a run of bad luck. It's one of the most extreme market divergences I've seen in my career. But as I'll show you... it's a setup we must be prepared to take advantage of when the reversal occurs.

There's no getting around it – uncertainty was the dominant market narrative for most of this year. And that put incredible pressure on small-cap stocks.

So, you might ask... What was the market so uncertain about?

A handful of major factors were at play. But largely speaking, the COVID-19 Delta variant was to blame.

This fast-spreading variant is the dominant strain of the virus in the U.S. The Centers for Disease Control and Prevention states it makes up the vast majority of new COVID-19 cases in the country.

That reality has put an incredible damper on the "reopening" narrative that fueled the ongoing recovery in the stock market earlier this year. And when it comes down to it, fears around reopening progress disproportionately hurt small-cap companies.

The reason is simple... In a renewed shutdown scenario, smaller companies are likely to face worse staffing hurdles, revenue declines, and debt-servicing struggles.

The market is well aware of this. And it has pummeled small-cap stocks in response.

The Russell 2000 Index – our benchmark for the small-cap market – dropped as much as roughly 9% from its March 15 high. But that's not all...

Take a look at the following chart. It shows the performance of small-cap stocks (Russell 2000) versus large-cap stocks (S&P 500 Index) from mid-March through mid-July. And as you can see, over that time frame, small caps significantly underperformed large caps... 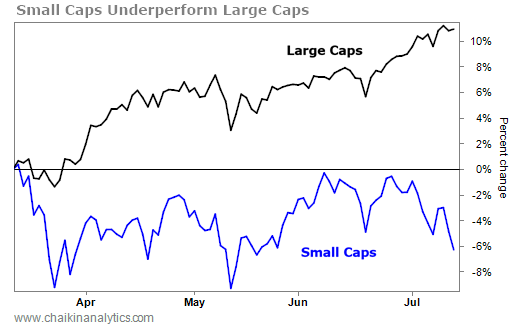 Now, you might be thinking, "Well, aren't small caps more volatile than large caps? Shouldn't we expect to see divergences semi-regularly?" And to an extent, you'd be right...

Small-cap stocks are generally more volatile than their large-cap counterparts. That's just part of their nature. But the divergence we saw earlier this year is much different...

In other words, this is the worst underperformance that small caps have experienced over any four-month period since July 2000. And it has huge implications for our portfolio...

You see, extremes like this don't last forever. Things don't typically stay out of whack for that long. And it means we'll see the Great Reversal when the market returns to its equilibrium.

But today, we’re seeing what could be early signs of the Great Reversal in small caps. Take a look: 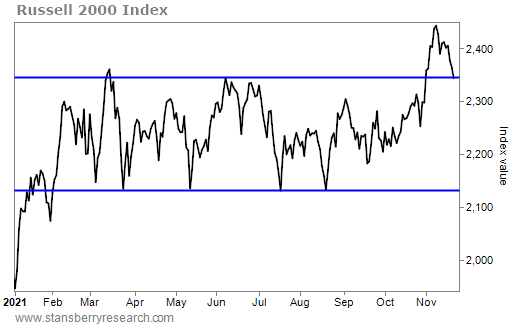 That doesn’t guarantee that we’ll see outperformance from here on out. But it’s an incredible signal that market conditions may be turning back in our favor.

There's no sugarcoating it...

The period before the Great Reversal is going to be choppy for small caps. But that doesn't mean we should throw in the towel and walk away from the sector.

Renewed shutdowns... future COVID-19 variants that defeat our vaccines... a liquidity crisis in the debt markets... all of these potential developments could push stocks – especially small caps – into a bear market.

But the data tell us these are extreme tail-risk fears... And today we’re seeing signs that the Great Reversal might be in its early stages.

While researching this market anomaly, I analyzed more than 30 years of data comparing the relationship between small caps and large caps. And while I can't guarantee we won't encounter a tail-risk event (no one can), I can tell you that history is firmly on our side.

Despite everything your emotions might be telling you today, you can't let them get in the way. It only spells disaster when investors get emotional. In reality, the data we use in Power Gauge Investor tell us that extremes like we're seeing today don't last forever.

And that's why we must prepare now for the Great Reversal.

Editor's note: When the market is clouded in uncertainty, Marc Chaikin's novel "Power Gauge" system can help you find opportunities to profit. This tool is the culmination of his life's work... And he created it with one goal in mind: to level the playing field between everyday investors and Wall Street in any market environment. If you're one of the many folks wondering what will happen next as we prepare for 2022, click here for more details.