How Billionaire Investors Look at the Market
By Marc Chaikin
Wednesday, April 27, 2022

Editor's note: The world's best investors do things differently... And the folks at our corporate affiliate Chaikin Analytics are pulling back the curtain on one of the secrets to their success. In this piece, recently published in the Stansberry Digest, Marc Chaikin reveals how to follow the pros' lead – by focusing on a big clue that most investors miss...

Many investors began worrying about a crash earlier this year...

And Russia's invasion of Ukraine in late February amplified those fears.

The S&P 500 Index lost as much as 13% from the beginning of 2022 through early March. That put the benchmark index in "correction" territory for the first time since the early days of the COVID-19 pandemic.

It makes sense... Folks typically start to panic when the "overall market" falls. They ignore all the tidbits of news along the way. And they don't react until the declines start to make headline news.

In other words, they're only looking at what they consider the "big picture" in stocks.

That's how most regular investors and the mainstream media think and talk about the stock market. They'll say that "stocks are up" or "the market is down" as if it's all one big entity.

You'll notice that many folks swing from euphoria to panic depending on whether "the market" has a good or bad day, week, or month. They're wrapped up in their emotions as if it were a sporting event.

But that's simply not the best way to invest. It's not the way most professional investors see the market. And it isn't how I have seen the market during my 50-year career, either...

Since the day I started at Wall Street brokerage Shearson, Hammill in October 1966, I learned to dismiss this idea of a uniform entity moving either up or down.

It's actually a multitude of different, smaller things...

And you can break them into even smaller groups, too.

The problem is, this makes for too many moving pieces. That's why many regular investors just completely ignore the idea.

Instead, they'll only think of "the market" in terms of the S&P 500. And a lot of folks keep track of how the Nasdaq Composite Index is doing so they know what's happening with "tech stocks."

This mindset is also how most folks invest... They just buy stocks. They're more focused on individual-company metrics like earnings reports, growth projections, and details like that.

You see, investors could set themselves up for greater success if they followed a different approach...

Studies have proven that 50% of a stock's performance can be attributed to its industry.

That means choosing the right industry is literally half the battle when deciding which stocks to buy and which stocks not to buy. If investors know which industries are doing well and which ones are struggling, they can get a head start on finding the best opportunities.

This mindset directed nearly all of my buying and selling decisions while I was on Wall Street.

Whoever could see the biggest threats and opportunities in the market first – and correctly determine how they would ripple through specific industries – had a huge advantage.

This is how billionaire investor George Soros looked at the market when I worked with him...

He passed it down to the great Stanley Druckenmiller, who also worked with Soros before starting his own hedge fund. Even Bill Gross, the former manager of the biggest bond fund in the world, uses this approach.

Other big-name wealth managers operate this way, too. Citadel and Impala Asset Management were both in the top five best-performing funds of 2021... And they both look at the market this way.

Instead, they search for elusive patterns across specialized groups that regular investors simply aren't looking for. Medallion is pretty open about this secret to its success.

My point is... this approach is how I learned to invest throughout my five decades in the business. And it's how I manage my own investments to this day.

For the most part, I don't worry much about the overall market. I don't watch every move of the Dow Jones Industrial Average or the S&P 500. I almost exclusively track industries.

But most investors are left in the dark when it comes to this approach. They're simply too focused on the hot stock pick of the day.

Now, don't get me wrong. I love ranking stocks...

So I took the algorithm for evaluating individual stocks in our Chaikin Analytics Power Gauge system... and applied it to industries. I'll share those details tomorrow...

Editor's note: Tomorrow, Marc is also publishing a new "inflation resistant" recommendation – specifically for subscribers to his newsletter. It's a stock in an industry with one of the most bullish setups out there right now... And he predicts its shares could soar 300% to 500% from here. This will be your last chance to get in on the "ground floor" of his Industry Monitor Portfolio. So don't miss it... Learn how to gain access here.

"Having access to the most powerful analytical tools available helps – a lot," Marc writes. But it's just as important to have this one simple tool in your belt before you get started... Learn more here: Pro Investors Do This... Amateurs Don't (But They Should).

The "smart money" has an unfair advantage. And if you want to have a fighting chance in the markets, it pays to know what they're doing. That's why Marc emphasizes this one strategy to "look over their shoulders"... Read more here: This Is Like Sitting in on Private Board Meetings.

Today, we’re looking at a decline in one of the biggest names in entertainment…

Regular readers know streaming services have exploded since the start of the pandemic. Companies like Disney (DIS) and Amazon (AMZN) have capitalized on folks being stuck at home by offering a wide variety of TV shows and movies. But as streaming services step up their game, the rise in competition is putting a dent in one company…

Netflix (NFLX) is the world’s largest streaming service. It offers TV shows, movies, and documentaries, including “Netflix originals.” But more companies have entered the streaming scene… with their own pools of diverse, high-quality content. That means Netflix has to work harder, spend more money, and make unpopular moves like raising its plan prices. Netflix lost 200,000 subscribers in the first quarter – its first drop in subscribers in 10 years… And the company expects to lose 2 million more in the next quarter.

As you can see in today’s chart, NFLX shares are falling. They’re down about 60% over the past year… recently hitting a new 52-week low. As folks explore other streaming options, Netflix has its work cut out for it… 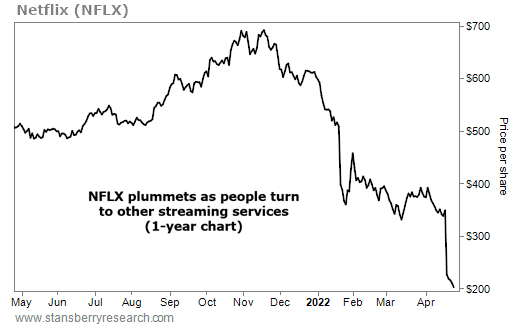