I love a good teaching moment...

A few weeks ago, one of my researchers sent me two stock ideas. Both ideas had solid analyses and I liked them both.

But he left out one key piece of information that I needed to know before we committed to any stock.

Today, I'll tell you what this crucial detail is. It's a powerful way to pinpoint which stocks you want to own over the long term. And it's easy to overlook...

My researcher's pitch for both stocks was simple. A while back, consumer-staple stocks were getting hammered. They were down more than 10% since the start of 2018.

Regular readers will remember that I recently wrote about consumer staples being the most hated stocks in the market.

In that essay, I made the case that a few stocks in the sector were trading for bargain prices.

My researcher thought he found two of the most attractive stocks. The first was spice maker McCormick (MKC). The second was condiment giant Kraft Heinz (KHC).

McCormick is the type of stock you would feel confident owning your entire life. Think about it like this... When you go to the grocery store, what spices do you usually purchase? If you're like most people, you buy McCormick spices. And you usually just do it instinctively – no marketing required.

No matter what is going on in the economy, folks are always going to purchase McCormick's products.

And when you dig into McCormick as an investment, it's a moneymaking machine. At the time of the stock pitch, McCormick's gross margins were the highest they had been since 2010. The company's free cash flow, which is the cash that's left after a firm pays its bills and invests in capital improvements, has more than doubled since 2010. Also, McCormick has increased its annual dividend payment every year for 31 consecutive years.

All things I love to see.

With all the negativity toward consumer staples in general, McCormick's stock was trading for less than what we thought it was worth.

Kraft Heinz was a similar story. It is the brand for ketchup. Its Heinz mustard is one of the top mustards on the market, and the company also sells a variety of other popular condiments and snacks.

This company enjoys a lot of brand loyalty. If folks have been buying Kraft ketchup and Heinz mustard for years, they are unlikely to ever switch to another brand.

At the time, Kraft Heinz's stock was dirt-cheap... Its price-to-earnings ratio was near a multiyear low. Kraft Heinz was only trading for 16 times earnings, nearly half of its three-year average of about 29 times earnings.

I thought so... But I needed to know one more thing before I made a decision.

When I mentioned the top line, I was talking about the company's overall revenue. I wanted to know if both companies were growing their sales every year.

You see, McCormick is the poster child for top-line revenue growth. It has grown its revenues 28 out of the past 30 years, a stretch that included three recessions.

The lesson here is simple. Why would you want to own a portion of a company that has a hard time growing its sales each year... especially in today's economy – where consumer spending is robust, gross domestic product is projected to grow 3% this year, and the unemployment rate is less than 4%?

If a firm can't grow in this environment, chances are it won't do well when the economy is in a recession.

Sometimes investors can get caught up in financial metrics such as valuation ratios, leverage ratios, operating margins, profit margins... the list goes on and on.

Those metrics are useful, but sometimes it's best not to overthink things.

Remember, when you buy a stock, you're buying an ownership stake in a company. Think about the products and services it sells. And in general, stay away from companies that struggle to grow their revenues each year.

Editor's note: Doc has found a way to make exceptional gains on industry leaders like McCormick – with less risk than buying stocks outright. It can even result in monthly income that's three to five times higher than what most folks get from their Social Security payment. Get the details here.

"Once you know how to recognize them, it's easy to see these businesses are in a league of their own," Austin Root says. As he explains, one specific trait puts great businesses ahead of the pack... Read more here: This World-Class Business Is 'Built to Last.'

"Fill your portfolio with businesses you feel confident will be bigger and better in the years to come," Austin writes. This means you need to know the most important details about your investments... Learn more here.

Market Notes
A FULL RECOVERY FOR SHARES OF THIS TOOLMAKER

Today, we’re looking at an industrial company that is bouncing back…

Longtime readers will recognize the term “bad to less bad” trading. By buying cheap, hated assets, you can make huge gains as the market evens out – or as things get “less bad.” Today’s company is the latest example of what can happen when sentiment shifts…

Snap-on (SNA) is a $11 billion industrial-tool manufacturer. The company was hit hard at the beginning of 2018, falling with the rest of the market during the February correction. The stock dropped 21% before bottoming in May. But the market turmoil didn’t last. And Snap-on has kept on doing business… In the most recent quarter, the company reported net income of roughly $179 million, a 17% increase from the same period last year.

As you can see in the chart below, SNA has recovered from its sudden tumble. Shares are up more than 30% from their May lows, and they recently hit a fresh all-time high. It’s more proof that you can make impressive gains as things get “less bad”… 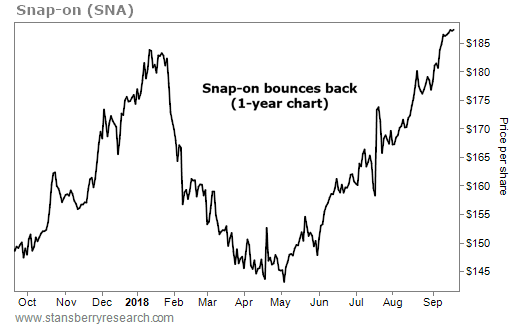