The bull market in housing is well underway. And what's causing it is no secret...

There's a massive amount of demand from homebuyers. Meanwhile, supply remains near record lows. And that's fueling a huge rise in prices.

This is also a huge tailwind for companies trying to meet today's overwhelming demand. And it's extremely bullish for homebuilders in particular.

In fact, one homebuilder is breaking out right now. It recently strung together eight consecutive up days in a row. And while prices have come down a bit since, history says it could rally another 20% from here as a result.

Focusing on a string of up days might seem odd. It probably feels random. But these momentum shifts signal an acceleration in the current trend... And they often tell us more gains are likely.

That's what we saw recently in homebuilder NVR (NVR). The company has operations in 33 metropolitan areas in 14 states and Washington, D.C. And homebuilding makes up the majority of its revenues.

It's no surprise NVR tends to do incredibly well when the housing market is taking off. Today is no exception...

The stock is up 20% so far this year. And it recently rallied eight days in a row. Take a look... 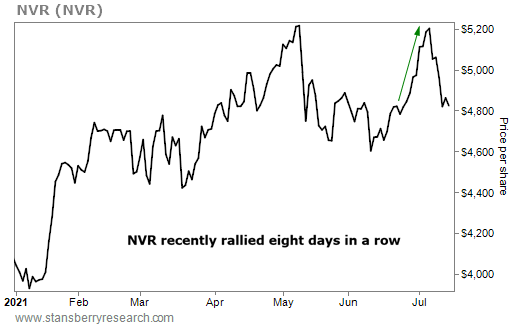 You can see the breakout in the chart above. And while prices have come down a bit in July, NVR is still in a clear uptrend.

History says it's likely to accelerate even more in the next six months, too. And that means it's a company to consider right now.

Since 1990, similar breakouts have led to major outperformance compared with a simple buy-and-hold strategy. Take a look at the table below...

NVR has returned 11% in a typical six-month period since 1990. That's more than 30 years of incredible performance. But setups like today's nearly double that return...

Buying after similar situations has led to near-12% gains in three months and a massive 20% gain over the next six months.

In short, the bull market in housing is in full swing. NVR is taking off as well. And its recent breakout means more gains are likely from here.

If you're looking to take advantage of today's housing boom, history shows NVR is a good bet today. Check it out.

"To say there's a housing shortage is an understatement," Chris Igou says. Homebuilders are still playing catch-up after the devastation of the mid-2000s housing bust. And that means the current boom in prices still has a lot of room to run... Read more here: Homebuilders Are 4 Million Homes Behind.

"Low taxes, warm weather, cheap housing... what's not to like?" Chris writes. The pandemic has pushed people out of big, expensive cities and into other parts of the country. And it could be the beginning of a generational shift... Get the full story here.