It's finally here... Americans are all-in on the stock market.

And that makes sense... The S&P 500 Index is at new all-time highs, and so is the tech-heavy Nasdaq.

Since the major indexes can do no wrong, folks have been piling in to stocks at record rates. Americans are now holding more money in stocks than ever before... and that includes the peak of the dot-com bubble.

Let me ask you this... Does that excite you? Or does that terrify you?

To be perfectly honest, I think it's OK to feel both excited and terrified.

But as I'll explain today, giving in to either of these emotions fully is a big mistake...

The chart below shows stock holdings among U.S. households as a percentage of their total financial assets. The data is from JPMorgan Chase and the Federal Reserve. It includes any stock that folks may hold in 401(k) accounts as well.

As of April, 41% of our financial assets were allocated to stocks. Again, that's higher than the dot-com peak of 37%. Take a look... 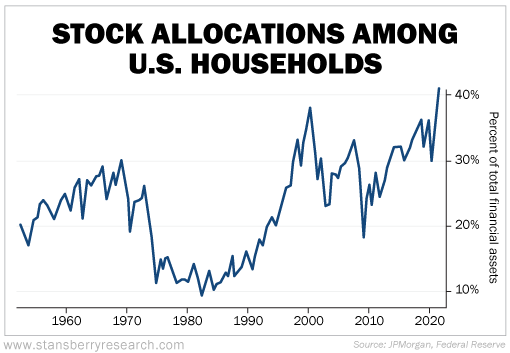 This means one thing... The Melt Up is definitely here.

As regular DailyWealth readers know, a market Melt Up happens when folks pile in to the stock market, which drives prices higher. As stocks keep going up, folks on the sidelines get sick of hearing their friends and family talk about how much money they're making in the market, so they decide to get in on the action. This leads to more buyers and a new round of highs.

This continues until there are no buyers left. As you can imagine, a Melt Up can lead to massive gains for investors.

A telltale sign of a euphoric market is how much money investors borrow to buy stocks. When you hear that someone is taking out a second mortgage to buy more of their favorite stocks, you know that you're deep in a Melt Up.

So one thing I like to keep an eye on is margin debt – or money that investors borrow to buy stocks.

Right now, folks are borrowing more money than ever before. Margin debt stands at nearly $862 billion – an increase of more than 25% since September of last year. Take a look... 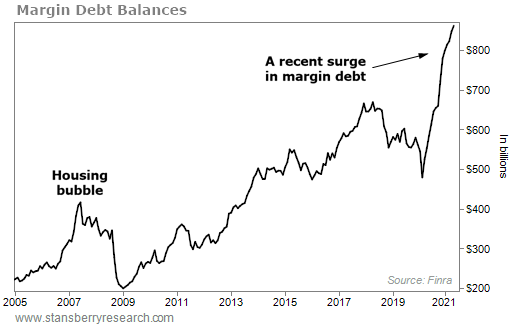 Of course, margin is risky. When you buy securities on margin, you must repay the amount you borrowed as well as interest... even if you lose money on your investment.

When there is a run-up in margin debt balances, I get nervous. More folks are buying with borrowed money, fueling valuations that aren't supported by what companies earn. And when stocks eventually turn, it could lead to a lot of investors being unable to pay back what they borrowed.

The good news is that earnings have been pretty solid. Giants like Alphabet (GOOGL), Amazon (AMZN), and Facebook (FB) have recently posted impressive results. Alphabet increased sales by 34% for the quarter, while Amazon and Facebook both posted sales growth of more than 40%.

Consumers are flush with cash, and they are out spending. The economic outlook for the rest of the year is bright.

That means everything is lining up for a boom in the stock market.

But that also means the dominoes are lining up for an eventual bust. You can't have one without the other.

Valuations are stretched, and when there are no buyers left in the market, prices can come down in a hurry – especially since many investors have been borrowing money.

That's why it's OK to be both excited and terrified about the stock market. But the one thing you should never do is be either 100% in or 100% out.

If you're 100% invested in stocks, you may eventually get burned when the market does turn. And if you have all of your money on the sidelines, you'll be kicking yourself in the butt when stocks are shooting higher.

As I always say, diversification is key. Your assets should be spread out among stocks, cash, bonds, real estate, and gold.

But the point is that you need to own stocks today. These euphoric markets can go much higher and much longer than you'd expect. So stay invested... Just don't be the fool putting everything into the market at the top.

Editor's note: With the Melt Up raging on, it's time to be smart about allocation. If you have a traditional "60/40" portfolio in stocks and bonds, Doc has an urgent warning you need to hear... and a much better investment model, capable of adapting to the ever-changing market. View his presentation here, before it goes offline.

Americans are finally getting back to normal life as pandemic restrictions ease. And that means the economy is rebounding. But the reason has less to do with cold, hard numbers than you might think... Check out the most important signal for the economic rebound right here: The One Indicator That Explains It All.

Even bull markets can be volatile. We've already been through some corrections on the way up. But a combination of factors is likely to send stocks even higher from here... Read more here: Stocks Can Soar Higher Than You Probably Imagine.

Computer chips are everywhere nowadays… With many folks working from home throughout the pandemic, they’ve needed even more of the devices that use these chips. And that trend has helped this company thrive…

Analog Devices (ADI) is a $65 billion semiconductor maker. It makes the tiny chips that power your electronic devices such as smartphones and laptops. Its chips are also used in 5G networks… And with 5G expanding rapidly today – and folks spending more time than ever glued to their screens – demand has remained high. Analog Devices posted nearly $1.7 billion in second-quarter revenue, up 26% year over year.

As you can see in today’s chart, ADI shares are in a long-term uptrend… They’ve tripled over the past five years – and they just hit a fresh all-time high. As technology continues to advance, semiconductor makers like Analog Devices will be well-positioned for success… 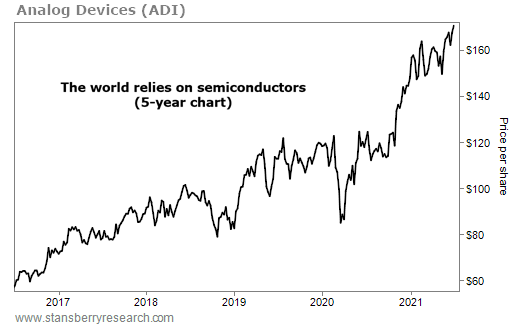