Americans Are Ready to Go Back Into Debt
By Dr. David Eifrig
Friday, March 11, 2022

Americans just went through one of their greatest periods of personal responsibility... and, as a result, financial empowerment.

All it took was our financial system being on the brink of collapse... and one of the worst pandemics in a century.

Folks have managed to save money by staying in. And Americans have been able to wind down their household debt to a huge degree. But this situation won't last...

Our country has a longstanding love affair with debt.

Right now, we have pent-up demand and savings from a pandemic. Financial empowerment is ready to give way to renewed spending. Most of all, costs are rising due to inflation.

And one of the easiest ways to get what you want – whether you can afford it or not – is to whip out a credit card...

During that time, wage growth was stagnant. But life became much more expensive...

Leading up to 2008, folks had a hard time keeping up with rising costs. For middle-class families to live like the middle class, they had to take on debt.

They took out student loans, car loans, and credit cards. And since many folks weren't able to put as much money toward a down payment on a home, mortgage payments ate up too much of their monthly budgets.

Of course, the problem with "buy now, pay later" is the "pay later" part. Eventually, someone has to foot the bill.

For those addicted to debt, the day of reckoning came in 2008. That's when the housing bubble burst and the U.S. financial system nearly crumbled.

Folks who'd loaded up on debt lost nearly everything. They defaulted on their mortgages, had their cars repossessed, and had to sell personal belongings just to keep enough food on the table.

The path to recovery was slow following 2008. It was painful.

But ultimately, in a way, the financial crisis helped reset the debt cycle. The "great deleveraging" began in 2009... which was the first time in more than 50 years that household debt actually fell on a year-over-year basis.

While it was horrific for many families around the world, the pandemic was good – financially – for just about everyone who managed to keep their jobs. Stuck at home, Americans couldn't spend money on fancy dinners or vacations. Instead, folks were forced to save.

Those thousands of dollars in stimulus checks didn't hurt, either.

This ratio peaked in 2009, when our love affair with debt had never been stronger. But thanks to the housing bubble and the pandemic (and now growing earnings), American households are in a stronger place financially than they've been in years... 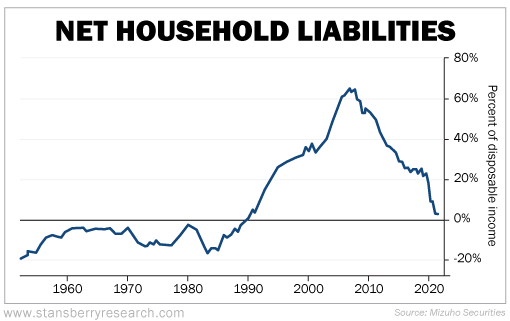 As with all love affairs, however, it's hard to stay away from your dearly beloved for long.

The shot in the arm from all the government stimulus has worn off. And that means the end is near for this period of deleveraging. Plus, there's another factor at work...

The latest data from this week showed that inflation has hit a new 40-year high. Prices in February rose across the board... everything from groceries to cars to furniture to medical care.

The core price index, which excludes the often-volatile categories of food and energy, climbed 6.4% from a year earlier. That's greater than January's 6% rise. And it's the largest increase since 1982.

As prices have moved higher, some of that has been offset by higher wages, thanks to a tight labor market. But not all of it.

With no more cash rolling in from Uncle Sam, folks will likely start taking on more debt again. The signs are already beginning to show it...

In the most recent quarter, U.S. mortgages rose by $258 billion from a quarter earlier. They totaled $10.93 trillion as of December 2021. Auto loans also increased by $15 billion.

Credit-card debt is starting to rise as well. Even though credit-card debt remains below its pre-pandemic level, it's surging higher... increasing by a record $52 billion in the most recent quarter. That was the largest quarterly increase in 22 years. Take a look... 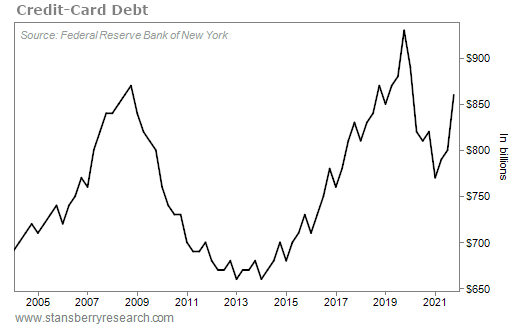 Americans are going to continue to run up their credit-card debts in the months and years to come... And that should boost shares of the best credit-card institutions.

Inflation is high. Prices for goods are on the rise... And with the world reopening, there's much to spend on.

Editor's note: Inflation is here... And it's threatening the retirement prospects of millions of older Americans. That's why Doc just came out with a recent interview about what's happening and what you can do about it... In fact, he shares one of the best ways to play this situation totally FREE (it earns you a guaranteed income of nearly 8%). Watch the interview here for the full details.

With people spending more and more money, we're likely to see even greater demand for goods and services. And as that happens, inflation could spike even further in the coming months... Read more here: Beware the 'Wage-Price Spiral.'

Inflation is probably going to get worse before it gets better. That means it's time to prepare your portfolio before other investors push the best inflation-beating assets much higher... Get the full story here: Prepare for a New Source of Inflation.

Today, we’re looking at a great type of investment for uncertain times…

With inflation running hot and global tensions escalating around the Russia-Ukraine war, investors are looking to park their money in safe-haven assets – like gold. Since the end of January, the price of gold is up roughly 10%. And today, we’re looking at a kind of business every gold investor should know about…

Royal Gold (RGLD) is a streaming and royalty company. It helps fund the early stages of mining projects… then sits back and collects checks on the production. So it takes on far less risk than the actual mining companies. And when the price of gold is rising, Royal Gold earns even more in royalties… In the most recent quarter, the company made $168.5 million in revenue – up 6% year over year. Plus, it rewarded shareholders by raising its dividend for the 21st consecutive year.

As you can see, RGLD shares have taken off lately. They’re up nearly 30% in the past year, including dividends. And they recently hit a new 52-week high. As long as uncertainty looms over the market, this uptrend should continue… 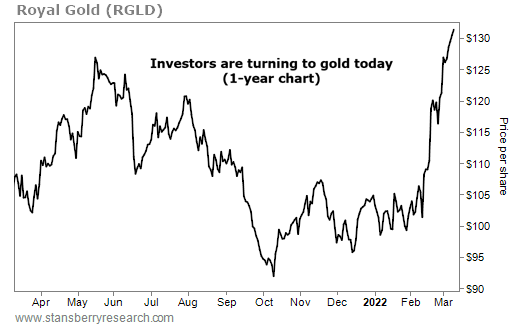