Don't Fall for This Wall Street Delusion
By Chris Igou
Friday, May 13, 2022

It's one of the longest-running lies on Wall Street...

I've heard it time and again... from all kinds of investment professionals. It's the one thing they say you should never, ever do.

They'll tell you that you're not "sophisticated" enough. They'll say you don't need to do it. And they'll assure you that even the best investors can't pull it off.

Heck, even Warren Buffett – arguably the greatest investor of all time – told his family not to do this with their money when he's gone.

It's a bias so deeply ingrained in Wall Street that you probably don't even notice it. Perpetuating it has become the norm... And going against it is a sure way to draw criticism.

Today, I'll share this lie with you... explain why it's all wrong... and why following Wall Street right now could be a huge mistake...

It's the idea that you can't – and shouldn't try to – time the market.

This is almost always directed at the little guy. The financial elite love preaching it to individual investors. And they always give the same reasons...

"You'll do more harm than good."

"If you sell now, you won't know when to get back in."

"You're not smarter than the market."

These points all lead to the same conclusion... that you need a professional to invest for you.

Sure, not everyone wins in the stock market. You won't be right every time. But Wall Street doesn't want you to realize that these excuses are just a way to drain your account with huge fees.

If you don't, it's almost impossible to outperform. You'll be stuck on the sidelines when others get rich in the hot investment of the day.

Not timing the market would have meant ignoring tech stocks over the last decade... or cryptocurrencies... or China.

Before the recent bust, these areas all led to incredible profits. But if you listened to Wall Street, you'd have missed it. You'd have been stuck in index funds while others reaped the benefits.

It gets worse. In times like today – when stocks are taking a beating – not timing the market means you're stuck "holding and hoping."

Instead, you need to act to protect yourself. The simplest way to do it is with stop losses...

Stop losses tell you exactly when to sell. No emotions. No stress.

If you use a 25% trailing stop, you're simply deciding that if a position falls 25% from its high, you'll sell. It's really that easy. And it allows you to avoid catastrophic losses... as well as the paralysis those can cause.

Wall Street would view trailing stops as timing the market. I view them as an insurance policy. And right now, you need them.

More important, timing the market isn't some crazy idea. It's a way for you to take control of your financial future. And no, you don't need a Wall Street professional to do that for you.

It's a lie the financial industry dreamt up to separate you from your money. Don't fall for it.

"Amateur investors don't give much thought to how much they could lose if things don't work out as planned," Ben Morris writes. Many investors only focus on raking in huge gains, ignoring any potential consequences. But this simple technique allows you to boost your profit potential while limiting risk... Read more here.

"This is how trading pros increase their profits without increasing their risk," Ben says. Novice traders tend to chase profits despite being clueless about the potential impact of their decisions. But the pros use this strategy to earn strong returns without worrying about risk... Learn more here: The Pro's Strategy for Increasing Profits and Reducing Risk.

Today’s company is suffering as costs continue to increase…

Regular readers know inflation is disrupting the economy. With prices on the rise, companies have to spend a lot more just to keep operations running… And investors get worried about future growth. That’s what we’re seeing with today’s business…

Goodyear Tire & Rubber (GT) is a $3 billion tire manufacturer. It sells tires under its iconic “Goodyear” brand and provides car-repair services. Demand for Goodyear’s tires has been stable… But the company is facing higher prices for materials, shipping, and labor. For example, Goodyear expects a $700 million to $800 million jump in raw-material costs alone in the first half of 2022… And in February, management said free cash flow would likely come in at breakeven this year. After that release, the company lost more than a quarter of its market value in a single day.

As you can see, GT shares are still dropping. They’re down more than 40% over the past year… And they recently hit a new 52-week low. As inflation continues to elevate Goodyear’s expenses, this stock may see more pain ahead… 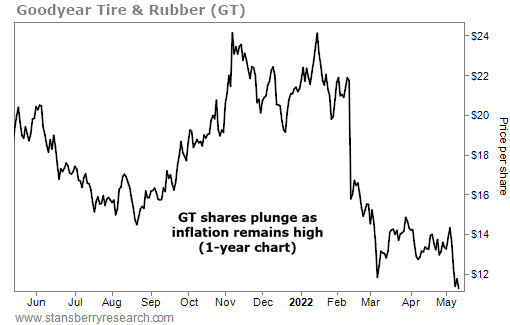