Why I'm Not Worried About the Melt Up Today
By Steve Sjuggerud
Wednesday, November 21, 2018

Editor's note: Our offices will be closed tomorrow in observance of Thanksgiving. Look for the next edition of DailyWealth on Friday. We hope you enjoy the holiday.

"Steve, what in the world is happening to the 'Melt Up?'"

I've received a mountain of feedback from readers asking if I'm worried about the wild ride we've seen in the markets.

The question seems to be looming in everyone's mind. And believe me, I get it.

The tech-heavy Nasdaq index has taken an even worse beating than the overall market. And that has investors spooked.

So I want to share an important lesson that I've learned in my 25 years as a professional in the markets...

Moments of extreme fear are the best buying opportunities.

Once you learn to equate fear with the feeling of opportunity, you'll finally be free to make a fortune in all of your investing endeavors.

Today, I'll share why this is true... and what it means for your investments right now.

Equating fear with opportunity is a hard threshold to cross. It's hard to learn, and even harder to put into practice.

In late 2008 and early 2009, I felt that incredible feeling of fear. Investment bank Lehman Brothers had collapsed, bringing down insurance giant AIG, and it felt like the financial world was about to end.

I was terrified... So I bought stocks with greater conviction than I ever have in my life.

It's the only time in my life that I not only invested all of my financial assets... but I took out a home-equity loan to get even more exposure to stocks.

I personally invested in a hedge fund (among other investments) that ended up soaring by triple digits after fees within 13 months. I cashed out, paid off the home-equity loan in full, and let the rest ride.

I recognized my great fear. And I knew that the correct, rational action was to buy... not to succumb to the fear. So I bought, even though it made my stomach drop.

But this doesn't mean I'm a madman...

I had stop losses on my trades. And as always, I recommend you use stops today. There's simply no excuse for chasing an investment to zero.

The exact stop you use isn't the most important factor. For years, I advocated for 25% trailing stops. But the reality is that having any stop is crucial. You must know the point at which you will sell an investment, no matter what.

It means you'll know when it's time to get out. And you won't ride a loser and allow it to crush your portfolio.

So set your stops. And when you do, give yourself enough "wiggle room" to stay in as long as is reasonably possible. That's because the Melt Up is sure to be volatile... And you don't want to spend your time and money getting whipped in and out of your investments.

I still believe we're going to see a massive Melt Up in U.S. stocks – a period of explosive gains as investors finally lose their fear and rush back into the markets. And now is the time to position yourself for that exact scenario.

I urge you not to panic. I know it's easier said than done... But instead of letting fear take over, take this opportunity to cross the threshold of becoming a great investor and realize that fear often translates into a great buying opportunity.

P.S. I've put together a portfolio of nine stocks that I believe will double as the Melt Up unfolds. That includes my No. 1 way to profit from this rare event... an investment that could become the most lucrative recommendation of my career. Right now, you can get in on this portfolio for a huge 65% discount... So I urge you to act soon, before this offer expires on Friday, November 30 at midnight. Get the details right here.

"Many investors now have no plans whatsoever to buy more stocks," Steve writes. "This is a huge mistake." Learn what happened when investors missed out on the best days of the market over the past 20 years right here.

"You don't want to miss out on the Melt Up because you're worried about the 'Melt Down,'" Steve says. Learn why we're not at the top of the market right here: How the 'Melt Down' Begins – And Why It's Not Here Yet.

Market Notes
THE MOBILE-PHONE TREND DEPENDS ON THIS COMPANY

Today, we’re highlighting the value of “behind the scenes” companies…

Longtime DailyWealth readers know “picks and shovels” companies provide the tools and services that fuel entire sectors. Betting on these businesses can be less risky than hoping a single company will emerge as the winner in its industry. Today’s company is supporting the booming mobile-phone trend…

Wireless-infrastructure giant American Tower (AMT) leases land to telecom giants like AT&T (T), Verizon (VZ), and Sprint (S). These telecom companies use the land to build cellphone towers and boost their network strengths. While they duke it out for sales, American Tower profits – no matter who wins. And the company’s latest earnings show it… American Tower’s net income grew to $377 million in the latest quarter, 13% higher than the same quarter last year.

As you can see in today’s chart, AMT is soaring. Shares are up nearly 70% over the past three years, and they recently hit a fresh all-time high. As long as telecom companies keep expanding their networks, this company should continue thriving… 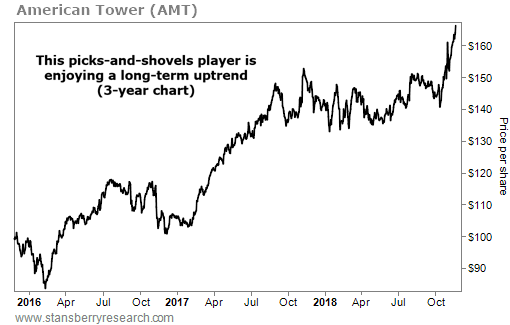