Essential Advice Nobody Else Will Give You
By Dan Ferris
Thursday, May 31, 2018

All investing success requires mastery of a single skill.

If you don't gain this expertise, you'll never make much money as an investor. You might occasionally get lucky... but you'll likely lose everything you make without this skill firmly under your belt.

The skill I'm talking about is saving money.

But it goes even deeper than that...

Few people realize saving money is more than just accumulating capital. Saving instills a discipline that touches everything you do with money for the rest of your life... And it's all due to a certain way of thinking.

Today, I'll focus on this specific way of thinking, and why it's so important. It's a secret almost nobody else will tell you...

Saving money means not spending it. The skill is negatively defined.

Negative advice is an extremely important part of what we do in my Extreme Value newsletter.

To understand why, read this quote from trader and philosopher Nassim Taleb's must-read book, Antifragile...

Charlatans are recognizable in that they will give you positive advice, and only positive advice... Yet in practice it is the negative that's used by the pros, those selected by evolution... people become rich by not going bust (particularly when others do).

Great investors routinely define the core of their investment strategies by what not to do, what they don't know, or by stumbling through mistakes, rather than marching from one success to another.

Here's some of the best negative advice from the world's greatest investors... Saying "yes" to growing wealth means saying "no" to mistakes, disasters, and losses.

I want to be like the rustic who said he just wants to know where he'll die so he can avoid ever going there (a quote often related by Charlie Munger). His whole life is focused on the primary negative he wants to avoid.

Taleb sums it up best: "The learning of life is about what to avoid."

Besides saving money and avoiding disasters, many other negative skills trump positive advice. For example, holding stocks long term as they compound your capital might best be defined as not selling every time the market hiccups. Not paying high fees and trading costs is another important negative skill.

It's unlikely you've heard much, if any, explicit discussion of the primary importance of heeding advice. Taleb is the only financial writer I can name who has explicitly developed the idea.

But you can ignore it at your peril...

For example, in the April 2008 issue of Extreme Value, I warned investors that the housing bust would result in multiple bank closures. I said it would be much worse than most people believed at that time.

You know what happened next... The S&P 500 Index fell nearly 60% from peak to trough. Extreme Value readers made 82% in five months on our recommendation to short shares of investment bank Lehman Brothers.

In the May 2011 issue of Extreme Value, I warned investors to hold plenty of cash and sell risky mining stocks. It turned out to be the second biggest bottom in the U.S. dollar of my 56-year lifetime.

The S&P 500 peaked days later and fell roughly 20% over the next six months. Mining stocks peaked in September 2011, entering a brutal four-year bear market that pushed shares of the VanEck Vectors Gold Miners Fund (GDX) down 81%.

In 2015, I thought the market was too expensive. I only made two new long recommendations all year. And I caught a lot of flak from readers. But stocks plunged 12% that August and fell another 13% from November 2015 through the bottom in February 2016. It was the worst year for stocks since 2008.

By focusing on negative advice, we're able to help investors "see around corners" to identify big financial disasters that might jump out suddenly and blindside them.

In short, you can't be a great investor without mastering negative skills.

It's the foundation of everything you'll do right as an investor. You can't invest at all without it, and the better you are at it, the better you'll be at other essential investment skills.

Editor's note: Dan recently discovered an incredible contrarian opportunity, using his value-oriented strategy. He says it's a low-risk shot at making 40% gains by next June... with the potential for sweeping returns over the long haul. To learn more about how to access this recommendation with a risk-free trial of Extreme Value, click here.

Ben Morris recently shared a piece of negative advice – how to not sell too early in one specific situation. Investors tend to bolt when this happens, but it can actually mean higher prices going forward. Learn more here: Don't Get Tricked Into Selling When You See This Bullish Sign.

"Investors focus on returns above all else," Dave Eifrig writes. "The problem is, most individual investors don't understand risk at all." As he explains, understanding risk is an important way to not lose money... while avoiding selling too soon. Read more here: A Dead-Simple Method to Manage Your Risk.

Today, we’re looking at another company with an elite global brand…

Recently, we covered one business with a powerful brand: Nike (NKE). Businesses with iconic brands benefit greatly from their reputations. Customers tend to stick with brands they like – and they’re willing to pay more for them, too. Today, we can see this dynamic with one of Porter Stansberry’s recommendations…

We’re talking about Ralph Lauren (RL). This apparel maker has built a globally recognizable brand since its start in 1967. More than 50 years later, this elite business is still performing well… Consumers continue to pay a premium for Ralph Lauren shirts, fragrances, and home furnishings. In its latest earnings report, Ralph Lauren beat Wall Street’s earnings expectations, and net income for the quarter grew to $41 million.

As you can see below, shares of Ralph Lauren are moving higher and recently hit a fresh 52-week high. Last August, Porter’s team recommended the stock in Stansberry’s Investment Advisory. Readers who followed that advice are up more than 50%. Congratulations to Porter on another great call… 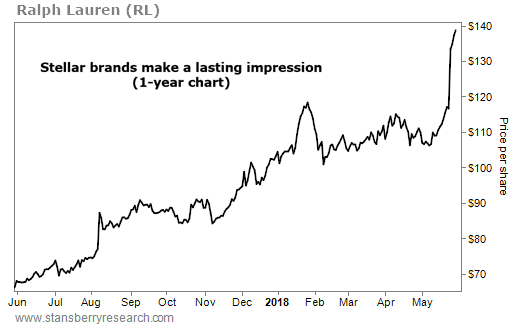