Exactly What to Do With Your Money Today
By Dr. David Eifrig
Friday, December 7, 2018

I can understand why "Mr. Smith" wouldn't share his real name.

He told his story to Forbes last year. It's a model for all the wild tales of bitcoin millionaires.

At the time, Mr. Smith had about $2.6 million worth of bitcoin. And on the ride up, he had cashed out $25 million.

On the other hand, Seoul, South Korea, resident Kim Hyon-jeong did give her name to the New York Times. Her story was different – and much more unfortunate.

If you're thinking about getting on board an exciting, speculative opportunity like bitcoin, then you need to read this. It could make the difference between a life of incredible wealth, or crushing debt...

Now he travels the world, first-class.

Unfortunately, on the other side of our story, Ms. Hyon-jeong took a different approach to her investment in bitcoin...

As a 45-year-old teacher with a child, she put about $90,000 into cryptocurrencies. It wasn't just her savings either. She cashed in an insurance policy and took out a loan for $25,000. As she described it...

I thought cryptocurrencies would be the one and only breakthrough for ordinary hardworking people like us. I thought my family and I could escape hardship and live more comfortably, but it turned out to be the other way around.

The value of her holdings was down 90% as of August.

One of these investors is a success, and one a failure. But it's not just because Mr. Smith got the timing right and Ms. Hyon-jeong didn't...

When Mr. Smith got in at $0.15, he had already seen bitcoin soar 1,775% in the previous six months or so... and it would drop nearly 50% just a few weeks after he purchased. Bitcoin was a new and untested asset. It would have been crazy to predict that bitcoin would go on to peak more than 12,500,000% higher from Mr. Smith's purchase price.

Ms. Hyon-jeong invested later, in the fall of 2017, during a time when bitcoin was front-page financial news around the world. You couldn't avoid the wave of newly minted cryptocurrency experts willing to project its price to $1 million and beyond.

Yet with such a wild and unpredictable asset, both speculations could have made money.

The difference here is that Mr. Smith bet a lot smarter. He invested a small amount for a successful professional. The technology got him excited, but he only bankrolled a small bet.

He also locked in gains along the way, taking some money – and risk – off the table as the rest of his investment continued to grow. You can do this in a lot of ways. For instance, you might sell half of an investment once it reaches a 100% gain – that way, you're playing with "house money."

Meanwhile, Ms. Hyon-jeong made her bet completely wrong. She put 30 times more into her crypto bet than Mr. Smith did... Worse, she wagered money she didn't have by taking on debt.

So here's exactly what to do with your money today...

If you want to speculate in cryptos, go ahead. Pot stocks? They could work. You could even bet the Oakland Raiders will win the Super Bowl at 250-to-1 odds if you'd like. Any or all of these wagers could pay off.

But bet small! Your position size needs to be commensurate with the risk and likelihood of the payoff. That's how you win in the markets.

Editor's note: This week, Doc unveiled a new way to make triple-digit gains in a short amount of time, on almost any stock you own... with less risk than simply buying shares. To learn all about this breakthrough technique, check out his Advanced Options service. If you act now, you can get 50% off a full year of his research... PLUS a free bonus year. Get the details here.

"If you know some of the best stock pickers in the industry, use what they are doing and bet on it," Doc writes. "That's what we're doing." Learn how he and his team are using simple stock advice for bigger gains – with less risk – right here: A New Way to Trade Our Best Ideas.

"'Dr. Internet' made a particular kind of investing mistake," Doc writes. "And unfortunately, it led him to financial ruin." Get the details on how to avoid this common mistake and ensure your portfolio is prepared for uncertain times right here.

Market Notes
THE UPTREND CONTINUES FOR THIS 'EVERYMAN'S' FITNESS CHAIN

Today, we’re revisiting the No. 1 name in judgment-free fitness centers…

Americans are taking charge of their wellness. Valued at $30 billion, the health and fitness industry has grown by at least 3% annually for the past decade. Around one in five adults now belongs to a gym. So it’s no surprise the “fitness chain for the rest of us” is seeing profits rise substantially…

Planet Fitness (PLNT) has been called an “anti-fitness fitness club,” due to its affordable memberships and hard stance against “gymtimidation.” The company’s judgment-free policies are designed to make everyone feel welcome, especially newcomers. And as we mentioned in August, appealing to average consumers seems to be paying off… Last quarter, Planet Fitness boosted earnings per share by 48% year over year. And revenue jumped 40% to $137 million for the same period.

As you can see, the stock has climbed about 175% over the last two years, and it recently hit a new multiyear high. With its welcoming reputation and a growing trend behind it, Planet Fitness should thrive for years to come… 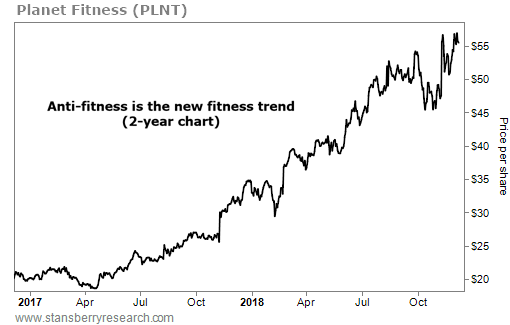