What to Know About the September Sell-Off
By Jeff Havenstein
Wednesday, October 6, 2021 The sell-off was brutal...

On September 20, the Dow Jones Industrial Average dropped 600 points. The S&P 500 Index fell 1.7%. But that was only a bad day in what turned out to be a bad month for stocks... The S&P fell nearly 5% in September.

Adding more fear, investment bank Morgan Stanley made headlines when it said that stocks may fall 20% or more. According to Chief U.S. Equity Strategist Mike Wilson, a bear market could happen because of slowing economic growth, falling consumer confidence, and less fiscal stimulus.

While you should pay attention to all of that, I'm not worried today. I don't think this is the beginning of a bear market. Let me show you why...

Think back to the dot-com boom. In the late 1990s and early 2000, a sense of euphoria surrounded the markets. Just about every asset class went up. Investors felt they could do no wrong.

As a result, everyone had a hot stock tip for their neighbor... And I'm willing to bet most of your friends couldn't stop bragging about their big winners.

There was little talk of market corrections or bear markets. The only real difficult decision people had to make was how much money they would borrow to buy even more stocks.

Right now, folks aren't as euphoric. The COVID-19 crash is still fresh in their minds.

This tells me stocks aren't likely at a peak yet...

When you start bumping into people you haven't seen for a while and they give you investment advice, that's when you'll know it's time to get out. We saw some of this earlier this year, but that has cooled.

To me, the recent sell-off in the market is a perfect example of "buy the dip."

Another reason I don't think that this is the beginning of the end – or at least a market drop of 20% or greater – is because the economy is in a good place.

Consumer spending has roared back since the start of the pandemic. It's currently at all-time highs. And as the consumer goes, so goes the economy... 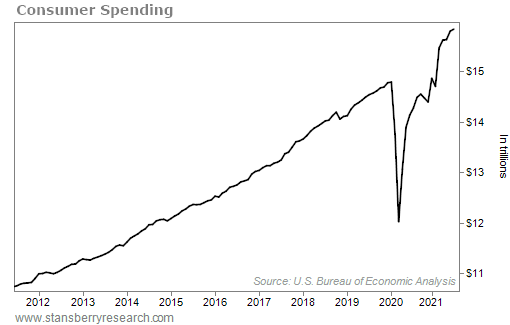 Meanwhile, corporate profit margins haven't been this high since 1968... 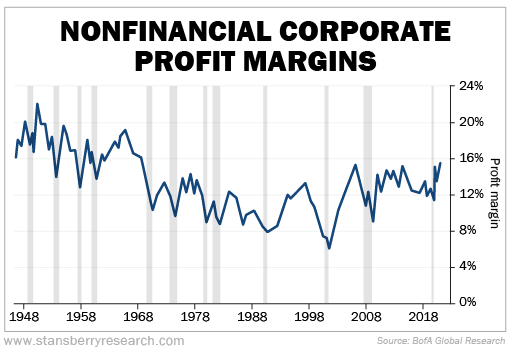 Plus, the chart below will show you there's plenty of liquidity in the U.S. economy. That means the risk of a near-term recession is low... 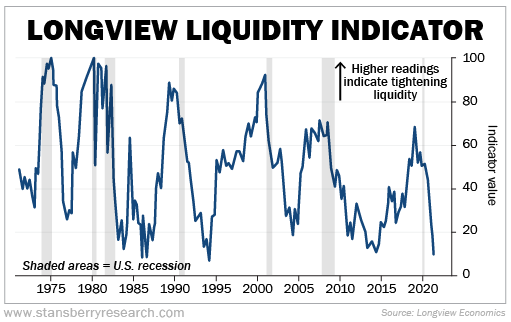 Now, I want to be clear... I'm not saying stocks will bounce back to new highs immediately. It's possible – even likely – that there's more selling to come.

A correction of 10% or more may be ahead... And if your portfolio is well-diversified today, you should be OK with that.

We have been overdue for a pullback. Stocks haven't seen a 5% pullback in more than a year.

The market has been too hot lately, and it won't be a bad thing if it cools off... since that will help get rid of some of the remaining speculators.

As my colleague Dr. David Eifrig always likes to say, "Corrections are a normal part of the market cycle."

Even throughout the last great speculative market run during the dot-com boom, as Steve and his team have noted before, the tech-heavy Nasdaq fell roughly 10% five times on its way to posting a triple-digit return. Again, corrections are normal. They are nothing to fear... even in bull markets.

I'm bullish over the next few months, despite the recent underperformance in the market. This is a fantastic opportunity to buy the dip.

Editor's note: If you're skeptical about the future of this bull market – or if September's price action has you spooked – you're not alone. Our firm's top partners and analysts recently sat down to take a hard look at the markets. Make sure you watch it now to see if the bulls or the bears win out... and to learn the No. 1 step you should take right now to position your investments for what's next. Watch the video here.

Protecting your gains is one of the keys to staying wealthy. And these three strategies are a great way to make sure your downside is covered, no matter what happens in the markets... Read more here: Three Ways to Lock in the Perfect Exit for Your Trades.

The fear of loss can lead people to make bad investment decisions. That's why you need to make sure you have tools in place to manage your risk before the next bear market arrives... Learn more here: Don't Fool Yourself... Avoid This Common Money Mistake.

Today, we’re checking in on a company that’s recovering as states reopen…

The entertainment industry was ravaged by the pandemic. Folks avoided large gatherings, and many venues closed their doors. But with states reopening and 183 million Americans now fully vaccinated, people are excited about shows and events again. Today’s company shows the rebound in this sector…

Live Nation Entertainment (LYV) is a $20 billion global events promoter and venue operator. It boasts more than 200 venues worldwide. And it’s a ticketing behemoth, selling 500 million tickets annually. Live Nation struggled last year, suffering an 84% year-over-year drop in revenue. Now, customers are back to buying tickets for live events… In the second quarter, Live Nation posted $576 million in revenue – still a big fall from the same quarter in 2019, but up nearly 700% year over year.

As you can see in today’s chart, LYV shares are rebounding well… They’re up roughly 80% from last year. And shares recently hit a fresh all-time high. As more and more people return to live events, Live Nation should continue to rebound… 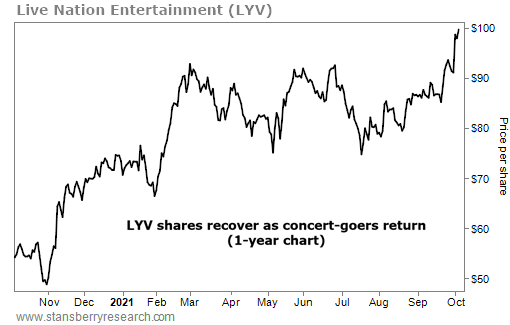 Inside Today's
DailyWealth Premium
Investors are giving up on another raging bull market...

Folks haven’t only been bailing on Korean stocks recently. In fact, investors are fleeing another major market that has been in a strong rally…

Recent Articles
This Beaten-Down Market Could Jump 16%
By Chris Igou
A Perfect Track Record in Tech Stocks
By Chris Igou
This 'Melt Down Indicator' Shows Stocks Aren't Peaking Yet
By Chris Igou
Don't Bet on the 'Wrong Horse' During This 10-Year Race
By Corey McLaughlin
What to Make of Today's Unthinkable Labor Market
By Dr. David Eifrig
Recent Market Notes
A 'BAD TO LESS BAD' RALLY BOOSTS SHARES OF THIS FOOD GIANT
Wednesday, October 27, 2021
THIS BIG BANK IS ANOTHER BULLISH SIGN FOR THE U.S. CONSUMER
Tuesday, October 26, 2021
HIGHS AND LOWS
Monday, October 25, 2021
THIS STOCK IS RACKING UP BIG GAINS IN A GRITTY SECTOR
Friday, October 22, 2021
IT'S A BULL MARKET IN 'TINY CHIPS'
Thursday, October 21, 2021