"It's the one thing all the best money managers do..."

I stopped eating and leaned forward.

One of the sharpest value investors I've ever met (we'll call him Dave) was about to tell me the one action he's seen the world's best money managers take to generate huge, life-changing returns. Here's what he told me over lunch that day...

The best money managers I know can recognize opportunities to put huge amounts of capital to work and have the temperament to follow through... That's what all the best ones do.

It reminded me of the famous trader Stanley Druckenmiller, known for taking large positions, which he calls "being a pig."

For example, when he was working for hedge-fund billionaire George Soros in 1992, Druckenmiller decided to "be a pig" and bet $1.5 billion shorting the British pound. Ultimately, the firm raised its short position to more than $10 billion... and pocketed an estimated $1.1 billion on the trade.

Dave shared a story about one such "pig" opportunity he found in the fall of 2016...

He had researched it thoroughly over several months. Then, the company went through a major transformation that made it even more compelling. Dave and his partners pounced. "We wanted to put 25% of our portfolio in it," he told me. "But we were only able to put 20% in."

When you know what you're doing, being a pig pays off. Dave's 20% position was the primary reason his portfolio doubled that year.

Dave's style is based on a few key ideas, all of which resonate deeply with what I've been doing in my Extreme Value newsletter since 2002 (with a lot of help from my chief research officer, Mike Barrett, since 2011).

The hallmark of Dave's style is concentration...

That means he only owns a few stocks and takes a big position in each one. Right now, he holds just seven positions.

For the past few years, the Extreme Value model portfolio has rarely held more than 10 to 12 positions. Right now, we have 14 positions.

Once you decide to hold a highly concentrated portfolio, other factors logically follow...

For example, Dave and his partners are highly selective. They only look at one or two ideas per year, and they spend six months researching them, trying to figure out if they're good enough for their portfolio.

That six months of research is important. We've often spent that kind of time getting to know our recommendations in Extreme Value.

This selectivity has generally been responsible for many of our biggest winners, including booze giant Constellation Brands (STZ), which we closed for a 631% gain... household-products company Prestige Brands (PBH), which we closed for a 406% gain... and payroll processor Automatic Data Processing (ADP), the No. 1 open position across all Stansberry Research portfolios, up roughly 435%.

First, we run various stock screens on Bloomberg and other sources. We then take a deeper look at the most promising candidates. I attend conferences a couple times a year, where I get to hear from many of the world's best value investors pitching their favorite ideas.

The overwhelming majority of ideas I hear about aren't what we're looking for, though. Most of the time, the companies are too risky – due to high debt loads, no cash flow, or some other obvious headwind.

Risk is the biggest reason Dave spends six months researching his ideas... And it's why we do the same thing in Extreme Value.

Value investing is about reducing risk. Every day during our research process, Mike and I dig a little deeper, understand the business a little better, and reduce our risk a little more.

When we're finally ready to pull the trigger and recommend a stock, it's less risky for us than for other investors, because we know the business better and won't let a little bumpiness in the stock price scare us out of it, as most investors tend to do – amateur and professional alike.

Out of our 14 model portfolio positions, I've called my readers' attention to two stocks in particular...

They're my "Dave style" positions. They're the best equity ideas I've found in 20 years of doing this.

Dave's portfolio is a lot like that. It's his seven best, highest-conviction ideas, and nothing else. He won't even consider investing in an idea if he's not willing to commit at least 10% of his portfolio to it. That's part of the philosophy that led him to bet 20% on his 2016 "pig" opportunity... and why he would have bet 25% if he could.

Now, we'd never tell our readers to put 25% of their money into one stock in Extreme Value, like Dave would. Our maximum position size is 5%, which is plenty big for our readers.

But when we find an idea that we think stands head and shoulders above the rest, we're not afraid to stand firm on the quality of our work and tell our readers about our deep conviction.

This way of investing isn't for everyone. But if you like the idea of finding the best businesses trading at bargain valuations – and every now and then, finding a "Dave style," high-conviction idea with the potential to make 10 to 20 times your money (with limited downside) – then I urge you to take our approach to heart.

Be concentrated... Be selective... And when the perfect chance arises, don't hesitate to "be a pig."

Editor's note: Dan doesn't usually make big claims about his ideas... Yet he says the "Dave-style" stock he recently uncovered is the single best investment opportunity he's ever found. He believes it has the potential to be a 20-bagger over the next several years... And even if things don't go well, it could easily triple – or more. Watch his short video now, before it goes offline.

"All investing success requires mastery of a single skill," Dan says. "If you don't gain this expertise, you'll never make much money as an investor." Read more of his essential advice right here.

"You can find this kind of key metric in every industry – if you know where to look," Dan writes. Knowing this piece of information is a great way to select the best stocks and reduce your investing risk... Learn more here: The One Number All Investors Must Know.

Today, we’re checking in on a leader in defense…

We’ve noted frequently that the U.S. spends a fortune on foreign conflicts. As these wars drag on, the government relies on a number of companies to supply its weapons, military vehicles, and other necessities. We call them “offense” contractors. Today, we’re revisiting a leader in military aircraft…

Boeing (BA) is one of the world’s largest defense contractors. While the company does make commercial planes, it also produces fighter jets, transport aircraft, and missiles. Earlier this week, the U.S. Army awarded Boeing a $160 million contract for support work on its Chinook helicopters. These government contracts add up to big revenues… In the second quarter, Boeing’s defense segment booked sales of nearly $5.6 billion, a 9% increase over the same period last year.

As you can see in the chart below, shares have broken out. The stock is up more than 50% over the past year, and it just hit a fresh all-time high. As long as the government keeps up its military spending, “offense” contractors like Boeing won’t run short on business… 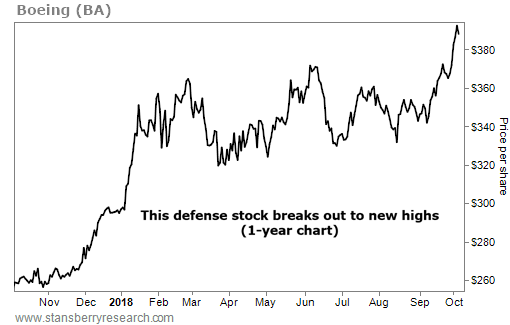