How to Learn the Secrets of Short Sellers
By Porter Stansberry
Thursday, October 25, 2018 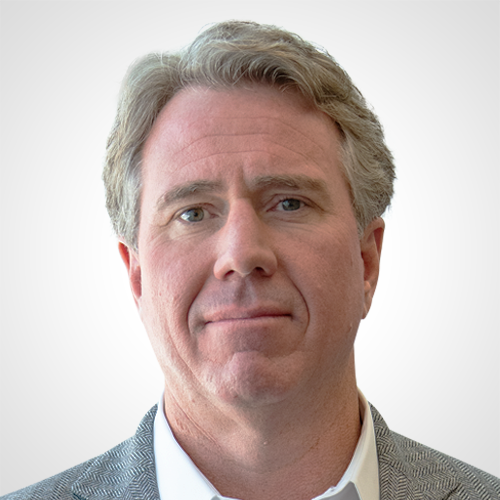 It seems like Elon Musk is always in the news these days...

The founder of Tesla (TSLA) agreed to pay a $20 million fine recently, after the U.S. Securities and Exchange Commission ("SEC") charged him with securities fraud. Musk had falsely claimed he had "secured funding" to potentially take the company private.

The next week, on October 4, Musk sent out another tweet that stirred the pot. He taunted federal securities regulators, calling the U.S. Securities and Exchange Commission ("SEC") the "Shortseller Enrichment Commission."

He also blasted short sellers as "value destroyers" and boosted another tweet suggesting that short selling – or investing to profit from falling share prices – should be illegal.

Such characters are firmly in this country's traditions. In America, there's no such thing as a "national interest." Instead, we're a rich polity of many competing interests. The public securities markets are where the public can most easily follow this drama of competition between America's leading business interests.

Who will gain the upper hand? The entrenched establishment, or the brilliant startups? What business efforts will gain momentum and support in America? Companies building electric cars, or businesses with far more conservative balance sheets and products?

Investors frequently determine the answers to these questions...

Their "votes" are measured in the public securities markets – with long and short trades, for example. And these judgments are "reflexive."

That is, the sentiment of investors often creates its own result.

We can see this at work with Tesla, for one. And it gets to the heart of what the public markets are designed to do.

Today, I'll delve into this idea. And I'll show you what we can learn from these "value destroying" short sellers...

Tesla has been buoyed and enabled by public investors. Tesla's "cult" has kept the company's stock trading at incredibly high valuations despite the company's growing operating losses. This enables the company to access additional capital through convertible debt and further share issuance.

This capital also allows the company to operate despite enormous losses. It enables still further innovation, such as self-driving cars and better battery technology. These innovations, in turn, increase Tesla's chances of success.

This process is, therefore, reflexive: Investors' confidence in Tesla makes it likelier that the company will, in fact, succeed.

In this way, Musk's criticism of short sellers is correct...

Anyone who casts doubts or makes criticisms of Tesla's efforts, accounting, or technology impairs the positive reflexive cycle Tesla enjoys in the markets, therefore making it less likely the company will succeed.

Shouldn't that be frowned upon? Shouldn't the markets be used only to advance the interests of new technology and innovation?

Remember, in America, there is no such thing as a national interest. Not even in new technologies. In America, no particular technology or company is predestined to win. In America, your worldview, technology, or favorite stock all have to compete... So Musk's claims of a better future for Tesla, environmental improvements, self-driving cars, and trips to Mars have to compete and win on their own merits in the market.

The SEC's role is to make sure that this competition is fair...

No cheating. So for example, publicly traded companies have to make honest claims about their profits and back them up with standardized accounting. Everyone has to compete using the same "weights and balances."

When Musk made a statement two months ago claiming to have a buyer for Tesla who was willing to pay $420 per share, he lied. He had not secured such funding, and no such deal took place. Still, that lie sent Tesla shares much higher, inflicting damage on short sellers and anyone who bought shares at those inflated prices. That's cheating.

Short sellers and regulators are important...

Neither group is perfect, of course. Both make mistakes. But both groups also help to ensure that the market's reflexive nature isn't abused.

They also help to make sure that our capital markets are efficient. That is, critics and regulators help to keep the contest between various corporate interest groups honest and fair so that the outcomes are what's best for our country. That's incredibly important for our future prosperity.

When you see "innovations" like ethanol, for example, that have aggressive promoters (i.e. corn farmers) and receive tremendous support from politicians, you may think they're worth the taxes and other negative externalities they require.

But the best way to judge the merits of any innovation is the crucible of the public markets. If ethanol was a good idea, investors would have funded it a long time ago. But if you ask investors to fund ethanol without any tax credits, the deal is dead on arrival – because it is fundamentally uneconomic. It will only lead our economy to be less efficient.

Ask investors to fund large-scale photovoltaic ("PV") solar grid power without uneconomic net metering or other subsidies. You'll see the same thing. I've long been a critic of Tesla because it seemed to me that the company depends completely on tax credits and other government benefits. Those are all signs of a fundamentally uneconomic product.

On the other hand, even projects with little chance of commercial success, like radical new drugs, will often find plenty of capital and opportunity in the public markets without any government backing. Investors are willing to shoulder great risk wherever there is a reasonable chance of real economic returns.

For years, I've encouraged stock investors to learn how to invest in bonds...

I do so because I've found that investing in bonds is much easier and can be just as lucrative.

The other advantage is that bond investors are focused far more narrowly on their return of principal. They receive no upside if a company is extremely successful, so they only care about the company's financial foundations.

Stock investors should understand those risks before they focus on the upside. Knowing what bond investors think about a stock is a must before investing.

Likewise, I believe knowing what short sellers think about a company is critical for investors. Knowing the "bear case" will help you make much better investment decisions, even if you never ever short a stock yourself.

At one point earlier this year, almost 40 million shares of Tesla were sold short – which means more than 30% of the company's float was out short. That made Tesla the most heavily shorted company in the world.

Finding out what bond investors think about companies is easy...

You just go to the Financial Industry Regulatory Authority ("FINRA") market data website. There, you'll find the "Bonds" menu button on the left. Click on it and go to the "Search" tab on the "Market Activity" menu.

Enter the name of any stock and FINRA will show you all of the bonds that trade and their most recent prices.

Tesla's page shows a few different bonds. The 5.300% coupon bond that matures in August 2025 is trading around $86.50. These bonds are not only trading below par ($100), they are down from $98 this time last year. In other words, since 2017, bond investors have seriously downgraded Tesla's chances of success.

How can you find out what short sellers think about a stock?

Well, many financial websites can tell you the amount of stock that has been sold short. Just Google the name of the company and the phrase "short interest," and you'll see how much stock is out short. When a company has 20% or more of its stock sold short, you know there's a serious problem.

Whether the shorts will be right or not, you can't know. But you should know their arguments before you invest.

"If you're like most investors, you've never considered short selling before and are uncomfortable with the idea," Porter writes. However, this strategy can be a critical tool for protecting your portfolio. Learn more about short selling right here.

Knowing what short sellers think about a company is an important key to understanding a business. Austin Root recently shared three other important tools investors should use when evaluating stocks. Read more here.

Today, we’re revisiting one of our favorite investment strategies…

Regular DailyWealth readers know we’re big fans of “trophy assets.” These are one-of-a-kind, world-class assets that give their owners a big leg up on the competition… And they are so desirable that their owners will always have access to financing. Today’s company owns trophy assets you probably know well…

Disney (DIS) has entranced the public with films and franchises for nearly a century. With characters like Mickey Mouse and its iconic princesses, this company has built an arsenal of irreplaceable trophy assets… Plus, you can throw in Disney’s popular vacation destinations, like the Walt Disney World Resort. Roughly 150 million people visited Disney’s attractions worldwide last year… And in 2017, Disney’s resorts segment brought in more than $18 billion in revenues.

As you can see in today’s chart, although DIS is experiencing some volatility lately, it recently touched a new 52-week high. And with its treasure trove of unique, enduring assets, this company isn’t going anywhere… 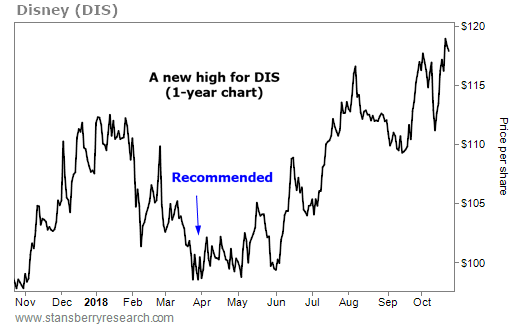