Most days, the market can seem pretty confusing. The mainstream financial media is jammed full of pundits, all espousing their next great predictions on the market.

But the reality is, their job is to fill the airtime between commercial breaks. Getting a call right is just a happy accident.

Most of those people really have no more idea of what is going to happen in the markets than their viewers.

Tomorrow's move could easily be up or down.

When things get confusing, that's the time to remember... You're not obligated to make any moves.

Don't let the constant chatter make you feel like you have to leap into the market with big, bold bets. If you don't like what's happening or find yourself confused by contradictory opinions, you can always steer clear of the stocks that are magnets for constant discussion.

There are so many passionate bulls and bears on this stock that the amount of analysis written for it far outstrips any sort of unique insights that you could have.

The good news is you don't have to bet on (or against) Tesla. We don't know what's going to happen to it... and we don't care.

Individual investors don't need an opinion on WeWork, Uber Technologies (UBER), Netflix (NFLX), or any other business you feel like you don't understand.

Today, the market feels a little strange. The S&P 500 is hitting new highs, but potential risks loom on the horizon.

By that, I mean that new companies can get big, faster. Technology allows competition to cycle through quicker. And many stalwarts are under pressure from well-funded upstarts.

I'm not recommending you stay on the sidelines... but given the market's unpredictability these days, I do recommend you get familiar with one type of defensive trade today.

Now, "defensive" in the investment context usually refers to businesses that have less exposure to a slowing economy. Sectors such as health care and utilities typically earn that title.

But that's not what I mean.

Rather, we want to place a trade that's unlikely to surprise us. We don't want to guess at Netflix's subscriber growth or try to figure out if the U.S. Food and Drug Administration ("FDA") will approve a certain drug.

Today, we want to ask, "What's the most predictable stock we can find?"

For most traders, that question isn't very appealing. If a stock is predictable and steady, you can't make much of a return on it. Regular traders want stocks that go up.

In my Retirement Trader newsletter, we don't need that... We can use options to make money on stocks that don't move.

Let's take a look at a recent example...

In August, I recommended a trade on media conglomerate Disney (DIS). Disney cranks out blockbuster movies like the current Star Wars franchise. It makes television shows for ABC. It produces sports content for its ESPN network. And that's just skimming the surface.

At the time, Disney was preparing for the launch of its new streaming service, Disney+. So I told readers it was time to take advantage of the buzz and sell options on Disney... 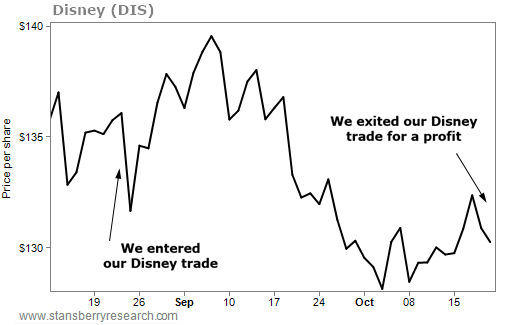 As you can see, in the two months we were in the position, Disney shares fell... but we were able to close the position for a 13% gain.

That's the power of my Retirement Trader strategy: We can make money if a stock rises... stays flat... or falls.

Editor's note: Recently, Doc sat down with a retired New York police chief to show him how he could make $1,000 in just a few minutes. It's all thanks to this strategy... And we got the whole demonstration on film so you can learn it, too. Just don't wait – this video goes offline at midnight tomorrow. Watch it right here.

"Some folks just don't care for finance and investments," Doc says. "They don't want to know the 'secret sauce.'" But being the kind of person who doesn't ask questions is a huge risk in investing... Read more here: "Giving Away the 'Secret Sauce' to Successful Option Trades."

"I spend most of my time educating readers about health, wealth, and how to live a better retirement," Doc writes. So when it comes to his newest trading strategy, it's no surprise he has thought hard about the best way to teach it. To see an example of his powerful new options strategy, check out his essay right here.

Regular readers know about Steve’s “bad to less bad” trading strategy. Once a stock has sold off, even a partial recovery can represent a triple-digit rally. It just takes some “less bad” news for investors to pile back in. And that’s what happened to today’s company…

Dick’s Sporting Goods (DKS) is a $4 billion retailer with 855 stores under the Dick’s, Golf Galaxy, and Field & Stream brands. The market started losing faith in continued sales growth in late 2016… Then, competition from Amazon hit retailers hard the following year. Overall, shares slid about 60% over a period of 11 months. Sales are still below their peak today, but they’re back in an uptrend… Revenues hit more than $6.1 billion year to date, up 3% year over year.

DKS shares have doubled since their November 2017 lows, recovering to multiyear highs. You’d still be sitting on a loss if you bought at the wrong time… but if you’d bought after the drop, you would have won big as shares got “less bad.” 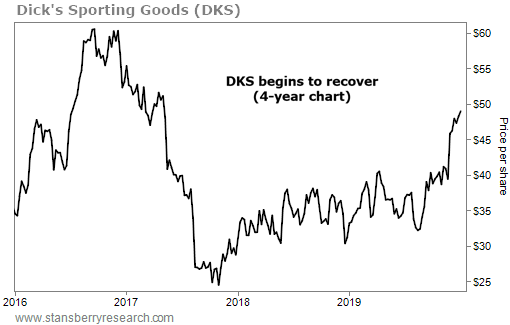