The stock recovery has gone global...

We've seen breakouts in the U.S., China, and other markets around the world. And today, we've got another massive uptrend taking shape.

It's a part of the world I'm certain you've never bought into... let alone thought about. But now is the time to broaden your horizons.

This global market recently hit a new 52-week high. That kind of breakout often leads to even higher highs. And it makes this often-ignored market one to buy today.

Based on history, investors can expect a 10% rally over the next six months.

South Korean stocks are up 73% since bottoming in March. That's an incredible rally. But I bet you hadn't noticed it.

South Korea isn't exactly in the news in the U.S. And its stock market isn't one the typical investor thinks about... let alone owns.

You need to pay attention, though, given the massive rally we've seen. And don't make the mistake of assuming that it's over just because we've seen a major rally.

Trying to call a top in stocks can be a dangerous game. You can scare yourself onto the sidelines too early and miss out on the bulk of the upside.

Buying into South Korea's market after a 73% rally might seem foolish. You might think you're taking a risky bet... or that Korean stocks are due for a pullback.

But history shows the opposite...

When Korean stocks break out to a new 52-week high, they tend to go on to make even higher highs.

There have been 11 other breakouts like this since 2000. And eight of those 11 instances led to positive returns over the next six months. 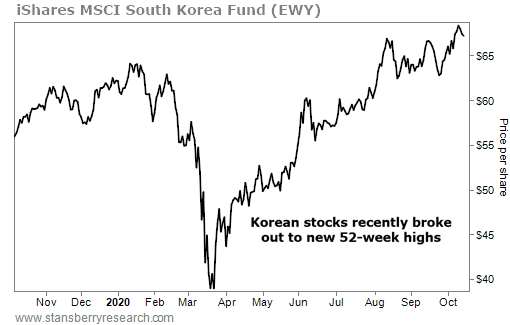 The chart shows just how impressive this rally has been. It has been a one-way ride higher. And we can expect the gains to continue from here.

This kind of move is a bullish sign for investors going forward. Take a look at what's possible when folks buy in after this kind of setup...

Since 2000, Korean stocks have produced a 4% return over a typical six-month period. That's not bad... But buying after breakouts like we're seeing today more than doubles that return.

Buying after similar setups can lead to 6% gains in three months... and a solid 10% gain over the next six months. That's much better than a typical buy-and-hold return.

Yes, Korean stocks are up big since bottoming in March. But that doesn't mean this market can't go higher from here.

You can easily take advantage of this with the iShares MSCI South Korea Fund (EWY). This simple fund holds a basket of South Korean stocks.

This opportunity might not be at the top of your mind. But history says it's one to take advantage of today.

With the dollar in a major decline, investors should be asking themselves how to make the most money while the currency falls. And history shows that emerging markets are set to benefit in the near future... Get the full story here: Emerging Markets Are the Big Winners in a Dollar Decline.

"The scales are tipped heavily in favor of one group of stocks," Chris writes. In fact, things are so out of balance, we could see hundreds-of-percent gains in the near future. And Chris has identified a one-click way to take advantage of this trend today... Read more here: Take Advantage of This Reversal and Send Your Portfolio Soaring.

Today, we’re checking in on a company that thrives on folks using too much tech…

The modern world relies heavily on powerful computer chips – with faster and faster processing. From smartphones, to televisions, to computer servers that store a high volume of data, semiconductors are a central part of our daily lives. And that’s great news for today’s company…

Qualcomm (QCOM) is a $145 billion semiconductor giant. It designs the tiny chips that power devices such as smartphones, laptops, and cars. And it’s a leading 5G developer as well. With the rollout of 5G taking place today – and with folks more glued to their screens than ever during the COVID-19 pandemic – demand has stayed high… Qualcomm’s semiconductor segment grew revenues 7% in the third quarter, hitting $3.8 billion. And non-GAAP earnings reached $0.86 per share, exceeding expectations.

As you can see in the chart below, QCOM shares are climbing. The stock is up more than 110% from its mid-March lows. As today’s technology continues to advance, semiconductor companies like Qualcomm are poised for success… 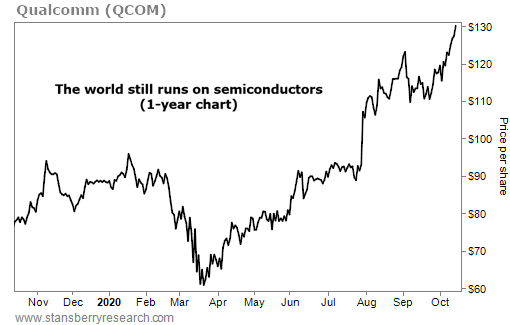