One of the Best Trading Strategies for Today's Market
By Dr. David Eifrig
Friday, November 9, 2018

At Goldman Sachs, I worked with Fischer Black, one of the pioneers in the world of options.

When I met him, he was a newly minted partner at Goldman Sachs. Black was one of the first academics to be lured to Wall Street. He loved the intellectual challenge – not the money.

You see, Black wasn't just smart. Everyone at Goldman was smart. He stood well above the rest. Rather than reading graphs or charts, he preferred to study tables of pure numbers. He refused to use a mouse... He considered it clutter. Instead, he coded custom keyboard commands to use on his computer.

Years earlier, Black, along with Robert Merton and Myron Scholes, published a paper that established the Black-Scholes formula for pricing options. Merton and Scholes later received the Nobel Prize for the work. (Black had already passed away, and they don't award the Nobel Prize posthumously.)

As a fixed-income trader, I didn't really need to work with Black, a partner and researcher. But once I struck up a rapport, I'd visit him as often as I could. We'd create and price options contracts and make deals that brought the firm millions of dollars.

At the start, Black's intelligence intimidated me. Here was a brilliant guy who had published profound, valuable, and original ideas. But before long, I noticed that although it took amazing intellect to invent these ideas, nearly anyone could understand them.

What was once revolutionary became routine.

Ever since Black showed me that options are a tool that anyone can learn about, I've been teaching others that they can use this genius-level strategy to improve their own investment returns... and actually reduce their risk.

To understand this, I want you to explore how options work. That way, you can see how this investment fits into your financial picture at this point in the markets... and how it can give you smoother, and potentially higher, returns.

This is the opposite of what most people think... maybe even you.

Unfortunately, too many investors start using options without reading the "instruction manual." They do it the exact wrong way and lose money rather than earn more of it.

In addition to limiting risk, options can also improve your returns when used in the right market conditions. That's a powerful combination – less risk and greater returns. You can achieve it with a strategy known as "selling covered calls."

A "call option" is an agreement to buy or sell shares of a stock at a specific price in the future. The buyer of the call-option contract gets the right to buy shares. The seller of the contract must sell the shares if the buyer wants to purchase them. At the start of the agreement, the buyer pays the seller some money up front to secure that contract.

This week, tech giant Microsoft (MSFT) trades for about $110.

You own shares of Microsoft, but let's say someone else (an option buyer) thinks that shares are going to surge quickly. He offers to pay you $4.50 per share today for the right to buy Microsoft for $110 a share in January 2019. He thinks that by then, $110 could be a major deal.

Let's say you agree to that deal, and you sell him a call option. You collect that $4.50 per share up front.

If Microsoft trades for less than $110 a share come January, you'll get to keep your shares and the $4.50 he paid you. Plus you'll be able to keep receiving Microsoft's $0.46 per share quarterly dividend. If it trades for more, you keep the $4.50 a share he paid... plus you sell him your shares for $110 each. That's an easy 4% gain in about two months.

Now, this also reduces your risk because it lowers the price you've paid for Microsoft. Assuming you bought your shares today at $110, you've already gotten back $4.50 per share.

So your cost for Microsoft shares is only $105.50, even though shares haven't moved. You've got less capital at risk. Microsoft can drop from $110, and as long as it stays above $105.50, you'll still remain profitable.

(Black's Nobel-worthy insight was the math that determines why this option is worth $4.50 and not some other price.)

There's one catch: If Microsoft shares jump up – say by January they're at $125 a share – you won't collect more than $110 for your shares. But that's fine... We don't mind giving up some upside because of the downside protection we get. Besides, earning 4% in two months is better than some mutual funds will do in an entire year.

That's all there is to selling calls. You can get as deep as you want into extra terms and the underlying math, but you don't need anything else to understand the basics of covered calls.

By selling a covered call, you've reduced your risk in case shares fall and increased your return when shares rise slowly. The trade-off is simply that you won't get as much upside if shares rise quickly.

That can be an attractive proposition, especially with where markets are today.

No one knows where the market will go next. October was one of the worst months in terms of stock performance over the past decade. For now though, prices are charging back from last month's lows.

In the near term, I agree with my colleague Steve Sjuggerud's "Melt Up" thesis that the market likely has a final leg upward. Markets do tend to end in blow-off tops that post very generous returns in their final months.

And as Steve has said, a bit of extra volatility is normal during a Melt Up in stocks. We could see more corrections like we saw in October on our way to the top.

Importantly, with volatility on the rise, we can earn larger premiums on our options. People pay more for options when they think things are uncertain or that stocks will be in for a bumpy ride. So options prices rise when volatility spikes higher.

And when the boom does ultimately turn to bust, you'll be glad to have this tool in your arsenal.

Today, the evidence in our view points to staying invested, but keeping a closer eye on our risk.

That's where covered calls can serve us well.

Editor's note: Doc says selling covered calls is his No. 1 favorite idea for making extra money – whether you're retired or still saving up. It's simple... And it can help you potentially collect $1,000 or more, every month. Right now, you can get three years of Doc's options-focused Retirement Trader service for less than the cost of a single year, plus hundreds of dollars' worth of additional bonuses. Get the details here.

"When most folks hear the words 'stock options,' they think of risky bets on volatile moves in the stock market," Doc says. "Nothing could be further from the truth." Learn about another one of his favorite options strategies right here: A Conservative Way to Generate 15% Returns on Your Portfolio.

"If you're taking on too much risk, your portfolio could take a big hit... especially if we go into a bear market," Doc writes. Right now is a great opportunity to assess your risk tolerance. And Doc's simple three-step guide is a good way to get started... Learn more here.

Today’s chart shows the success of an iconic beverage company…

As DailyWealth readers know, beverage companies are some of the safest stocks you can own for the long term. Simple goods like soda, tea, and bottled water might seem boring, but drink sales aren’t dependent on costly innovations. Just look at this beverage icon…

Coca-Cola (KO) is best known for its signature brand of sugary soda. But with Americans drinking less soda than they have in years, the $210 billion company is finding greater success with brands like Fuze Tea, Glaceau Smartwater, and diet drink Coca-Cola Zero Sugar. In its recent quarterly release, Coca-Cola noted a double-digit boost in sales volume for Coke Zero. And the company’s profits hit $1.88 billion for the period, up 30% year over year.

As you can see, the stock has risen more than 20% over the past two years, including dividends. And it recently hit a fresh all-time high. Selling beverages might not be on the cutting edge. But it’s clearly working for Coca-Cola… 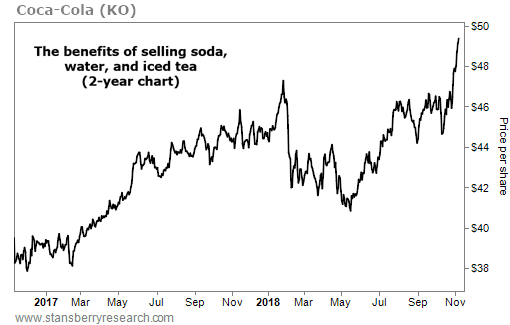