It always amazes me when folks vastly underestimate just how much they will spend in retirement.

I'm placing an emphasis on "vastly" because it's not by $10 or so every month. It's much more. I'm talking potentially hundreds of dollars or more a month.

And if you don't have enough saved, this overspending can ruin the rest of your retirement. I've seen it too many times... where new retirees burn through a good chunk of their nest egg in just a few years.

It puts so much more stress on your golden years – when you should be enjoying them.

But you can keep this from happening to you...

First, understand that this is an easy mistake to make. Even the best budgeters and Excel sheet wizards fail to estimate the true cost of retirement. That's especially true in the first few years after leaving the workforce.

Most folks think that expenses will go down significantly in retirement. They don't have to commute to work, which will cut down on the gasoline bill... There's no business lunches or new clothes to buy for work... Maybe they downsize or pay off their mortgage... And the kids are out of the house, so no one is nagging them for spending money.

But most folks fail to realize how much extra time you will have once you retire. And what do most retirees do with their newfound freedom?

They travel, go out to restaurants, start new home projects... you name it. There's only so much sitting on the couch you can take.

According to the international travel agency network Virtuoso, the average retiree spends $11,077 a year on travel. That's a lot, considering half of all Americans aged 65 and older bring in less than $27,398 in yearly income.

The table below looks at how much you should prepare to save for different things in your retirement. Keep this in mind as you plan your projected expenses... 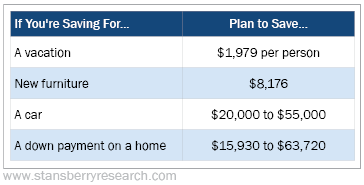 Of course, not everyone will have all of these expenses. But you can see how a few vacations a year, a home renovation, contributing to a child's wedding, or a new car after your old one suddenly dies can add up.

You'll also have to consider higher medical costs as you age. And the cost of medical care keeps shooting up...

Fidelity estimates that an average retired couple needs approximately $300,000 saved after taxes to cover health care expenses in retirement. And that's an increase of about 4% from a year ago.

Getting old gets expensive. You need to make sure you're able to afford everything that comes along with retirement.

Because there are so many unforeseen costs when you retire, I can't stress enough the importance of a rainy-day fund. Every retiree needs one. Trust me, there will always be unexpected costs, and you will likely have to spend more than you planned for in retirement.

As a general rule, you should always have about three to six months' worth of expenses in cash.

While you can budget out everything from how many vacations you take per year to how many times you eat out, there will always be expenses that pop up that you just weren't expecting. You have to be prepared for those and have enough money saved.

I want you to be financially stable. So be prepared... Make sure you have a rainy-day fund.

Editor's note: To build wealth for the long term, you have to make your money work for you – but that's not easy today. Retirees are facing an overvalued stock market, inflation, historically low bond yields, and more. That's why Doc recently held an online event where he walked through how to protect your savings, and revealed something that could mean the difference of millions in your retirement... with the numbers to prove it. Watch his video here.

"It takes years to build up a nest egg that will last you through retirement," Doc says. But right now, this looming concern is threatening to make it even harder to have what you need after you stop working... Read more here: The Biggest Concern for Retirees.

"If you've been putting off thinking about your retirement and how you'll fund it, it's time to start now," Doc writes. And even though it's best to start as early as possible, it's never too late... Learn more here: Who Wants to Be a Millionaire?