In which jobs do we find the most intelligent folks in the world?

Ask a random group of people this question, and you're likely to hear the same professions repeated.

These folks allow us to plumb the deepest depths of the ocean and travel into space. They figured out how to turn small amounts of matter into energy that can power entire cities.

But within their industries, we find some of the most horrible mistakes and disasters. And as I'll share today, they teach us an important lesson...

Take the 2010 Deepwater Horizon calamity, also known as the BP Oil Spill. The oil rig and drilling site failed to properly cap and contain a leaking oil well at the bottom of the ocean. The rig ended up exploding, and the resulting oil spill wreaked havoc on the environment.

In Japan, the Fukushima nuclear reactor was located near the ocean. In 2011, an earthquake, tsunami, and a number of backup system failures led to three meltdowns, explosions, and radioactive contamination. It's regarded as the second-worst nuclear accident, after the 1986 Chernobyl disaster.

So, with such incredibly intelligent people working in these industries, how do such disasters happen?

Researchers studied the decisions leading up to the Deepwater Horizon oil spill. Their findings included some specific statements...

A study of the problems at the Fukushima facility turned up safety reports that had been ignored. These cited flaws in the plant's ability to withstand earthquakes and tsunamis – both well-known to occur in Japan.

In the reported findings for the Fukushima disaster, we see a theme similar to that of the Deepwater analysis...

The space shuttle disasters also received incredible scrutiny. The analysis of NASA's decision-making and the decisions of related vendors and partners in the space program identified a key source of those errors. In a researcher's own words...

People are so sure of themselves, when they see something go wrong that they can't fix, they accept it.

The NASA decision-making study said that the researchers found a "normalization of deviance." That's a fancy, rocket-scientist way of saying that problems were swept under the rug.

Hubris is at the center of some of the worst disasters in history.

Investment research is another business full of people who are incredibly bright... But sometimes, they also have exceptionally large egos that make them blind to data they don't want to see.

When you spend your whole day defending a stock you pitched – whether to colleagues, clients, or friends – you can start to attach the performance of the idea to your own value.

You can start to ignore – or even fight – any signals that disagree with your original thesis for your idea. After all, the contrarian data might mean you were wrong! And if you're on Wall Street, you're a "master of the universe"... so how could you possibly be wrong?

And if you're investing on your own, you need to strive to do the same.

I'll finish with some words of guidance from billionaire investor and hedge-fund manager Paul Tudor Jones...

Always question yourself and your ability. Don't ever feel that you are very good. The second you do, you are dead.

Editor's note: Eight of the 10 richest money managers in the world use Joel's research. Some of his private clients pay him as much as $100,000 a month. And right now, his investigative work is pointing to a massive shift in the stock market. If you're invested in any of the tech darlings that have skyrocketed over the past year, you'll want to hear this story... Check out his urgent bulletin right here.

Joel is an expert at spotting sections of the market where people are blinded to the truth. And right now, he's seeing one of these market distortions in how some companies are being valued in the post-pandemic world... Get the full story here: The Market Hasn't Yet Priced in One of the Biggest Losers of the 'At-Home Revolution.'

Making money as an investor is as much about knowing the markets as it is about knowing yourself. And that often means knowing what you're willing to risk and what you should avoid... Read more here: To Make Money in the Markets, Follow These Three 'Maxims.'

Regular readers know that right now, U.S. housing is booming. Folks are looking to buy houses… but there’s not nearly enough supply. That’s making the market extremely competitive. And today’s company is benefiting as it builds houses to meet that demand…

Based in Texas, LGI Homes (LGIH) is the 10th-largest homebuilder in the U.S. The company builds homes in more than 100 communities in 18 states. And it recently finished out the best year in its history… LGI closed 9,339 homes in 2020 – a company record. Not only that, but this success isn’t slowing down. Already, before releasing its first-quarter earnings report next month, LGI has announced that it broke quarterly home-closing records for the period… up 40% year over year to 2,561 homes.

LGIH shares are in a long-term uptrend. They’ve soared roughly 490% over the past five years. And they recently broke out to new all-time highs. As folks compete more and more fiercely for new homes, this trend should continue… 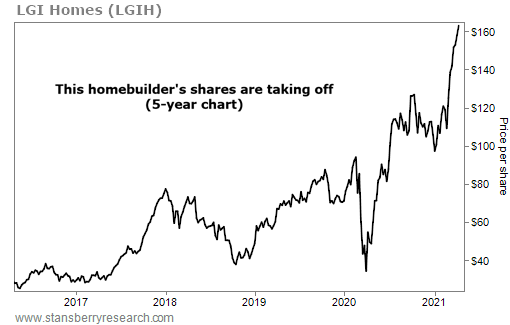