The Best and Brightest Just Gave Up on Commodities... And I'm More Bullish Than Ever
By Steve Sjuggerud
Friday, March 15, 2019

"Merrill Lynch got OUT of the commodities business in 1998 because they weren't making any money," investing legend Jim Rogers told me over dinner in New Orleans many years ago...

Then, with a twinkle in his eye, he winked and said, "That's the same year I launched my commodity index fund."

The pencil pushers at investment bank Merrill Lynch had done the math – they knew that the main commodity index had lost half its value between 1980 and 1998 – and they threw in the towel.

The Rogers International Commodity Index soared from a starting value of 1,000 in 1998 to a peak near 6,000 a decade later.

Jim Rogers might be the world's most successful investor... In the decade of the 1970s, he delivered a 4,000%-plus return to investors in his hedge fund. Then he retired. (Legend!)

So when Jim told me that story, I took note. And today, something similar is going on.

The best and brightest are getting out of commodities once again. And that means we could be near the start of a major move higher.

The venerable investment bank Goldman Sachs is giving up on commodities.

Commodity prices have lost two-thirds of their value since their 2008 peak. So the pencil pushers at Goldman have decided there's no money to be made in the commodities business. They're throwing in the towel.

The Wall Street Journal broke the story last month. And the explanation from Goldman on closing its commodity businesses was beautifully simple...

The business uses too much capital for too little profit.

It's identical to the lesson I learned from Jim nearly two decades ago.

It's a major shift from one of the world's most powerful investment banks. And it has made me more bullish than ever on commodities...

That's because this landmark decision tells us exactly what the market sentiment is toward commodities today. It's terrible. It would have to be, for Goldman to close down its commodity business. And that tells me that our opportunity is huge.

Goldman has given up on commodities. And it feels like nearly every other investor has, too.

The perception is that commodities are dead... that there's no way to make money in the businesses... that the next boom might not ever come, so it would be better to move on.

As I'm sure you realize, this is great news. It means we're on the edge of a turning point...

This is darn near the best signal we can get that a commodity boom is about to begin.

No one is talking about this... because it's not something you can pin down with a special indicator. It's not derived from a formula. And it's not based on secret relationships in the stock market.

Instead, this move by Goldman tells us how investors really feel. And this time, it reveals an entire industry is about to shift.

That's because this is a "real money" indicator. It's a business decision made by the pencil pushers at Goldman Sachs who are watching Goldman's bottom line... and reining in the institutional investors. These kind of business decisions aren't made lightly – they really mean something.

Sure, you can see negative sentiment when individual investors flee the market. But that's easy to see. They're the small fish. And just a little volatility can shake out Mom and Pop investors.

It's not nearly that simple with institutional investors... or large investment banks like Goldman Sachs. Those folks live for big market swings. It's where they make the most money.

That also means that when these folks begin to turn their backs on an asset, the climate is about as bad as it can get. The pencil pushers have won out over the institutional investors.

When that happens, that means the market is truly "hated." And it's exactly what we're seeing today in the commodities market.

Make no mistake... This is setting up a huge opportunity to make money.

When Merrill Lynch closed down its commodity business in the late '90s after years of underperformance, the company almost perfectly pegged the bottom in commodities.

The decade that followed proved to be one of the best ever for commodity prices. Again, the Rogers International Commodity Index soared from a starting value of 1,000 in 1998 to a peak near 6,000 in 2008 – a fantastic 500% return. And anyone who invested when Merrill pulled out made incredible profits.

It's the kind of setup contrarian investors dream about. And it's here now. I encourage you to take advantage of it.

"Gold gets the glory," Brett Eversole says. "But does gold deserve this top spot? More specifically, does it deserve it right now?" Other precious metals are also primed to rise this year as commodities soar... And one could actually outperform gold. Learn more here: Another Reason to Love Precious Metals in 2019.

"You won't see it in the headlines. It won't be the talk of your next cocktail party," Brett writes. "No one cares... And that's actually a good thing." Learn more about a recent rare move that's part of a "silent boom" in commodities right here.

Market Notes
THIS INDICATOR TELLS US THE ECONOMY IS THRIVING

Today, we’re seeing another positive sign from one of our “real-world indicators”…

Live Nation Entertainment (LYV) calls itself the “world’s leading live-entertainment company.” The $13 billion company put on roughly 35,000 events last year at its 237 venues around the world, attracting nearly 93 million fans. It was record-breaking attendance for Live Nation… So it’s no surprise the company also enjoyed record-breaking sales of nearly $11 billion, up 11% from 2017. Clearly, music fans aren’t hurting for cash today…

As the chart shows, LYV shares are up more than 40% over the past year. They recently hit a new all-time high. As more and more people flock to Live Nation’s concerts, it tells us the economy is doing just fine… 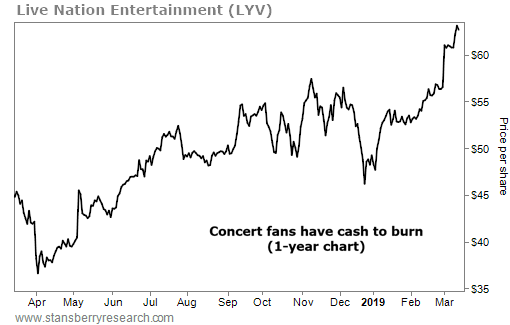