Despite a recovering economy and a bull market, lots of you are worried.

I don't blame you. It takes years to build up a nest egg that will last you through retirement. And it can take just a few weeks to watch it get cut in half.

We're in a market boom right now. That means a bust is sure to be right around the corner. Plenty of folks wrote to me recently and asked how retirees should handle the coming Melt Down.

But surprisingly, that wasn't the No. 1 concern...

When it comes to retirement, it turns out that folks are more worried about the looming threat of inflation.

Inflation reduces purchasing power. For retirees, your health care becomes more expensive, as well as your housing costs and even your groceries. Simply put, a dollar won't buy as much as it used to before a surge in inflation. And that means you run the risk of outliving your money.

It's scary to think of. No one wants to be forced back to work when they should be on a beach sipping Mai Tais.

As an example of how inflation can crush retirees, take a couple with $1 million saved for retirement. They expect to spend $50,000 a year on expenses and trips to see their children and grandchildren. Let's assume they earn 3% on their money in safe bonds.

Now, 12% inflation is unlikely. But you get the point. Even an inflation rate of 4% or 5% can reduce the amount of time you can live on your nest egg.

And Stansberry Research subscribers aren't the only ones worried about inflation...

Given the trillions in spending that our government has been pumping out lately, inflation is the latest buzzword. Flooding the economy with all that cash will definitely lead to more dollars chasing the same goods... and that means rising prices.

In April, investors got a wake-up call when the core Consumer Price Index ("CPI") rose 0.9% month over month – an annualized rate of 11%. The core CPI is a key measure of inflation, and it's what economists tend to focus on because it strips out volatile food and energy prices.

As you can see, it was the biggest monthly change in years... 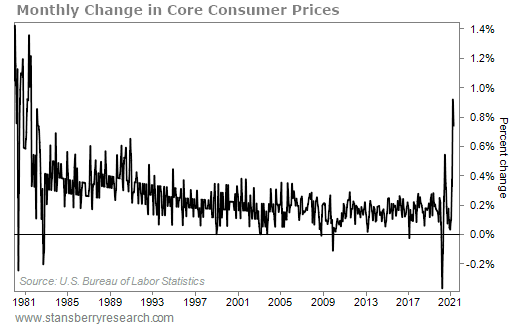 Raising interest rates is one way to cool inflation. When rates are higher, consumers tend to save more and spend less because they can earn higher returns on their savings.

But the Federal Reserve has been adamant that it will not raise interest rates any time soon – likely not until 2023. And that's why a lot of folks think inflation can run pretty high over the next few years.

Options traders are betting on it. The chart below shows the option-implied probability of inflation over the next five years.

In March of last year, folks weren't worried about inflation. They thought it would be under 1%. But today, markets are implying there's a 29% chance of inflation being above 3% over the next five years. It's near the highest reading over the past decade. 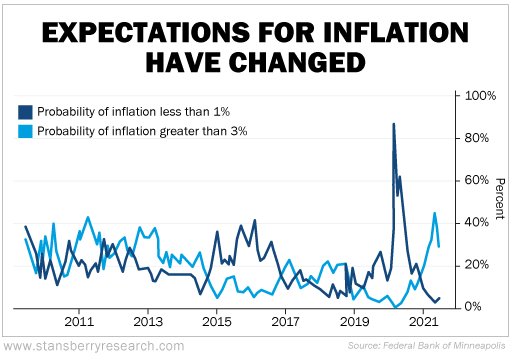 We track inflation each month in my income-focused newsletter Income Intelligence. Instead of just focusing on the core CPI, for example, we look at a number of inflation indicators – from commodity prices to real-world prices, like the price of a bike at Walmart.

We're showing that 16 of our indicators are flashing "inflation," and that's one of the highest readings we've ever had. 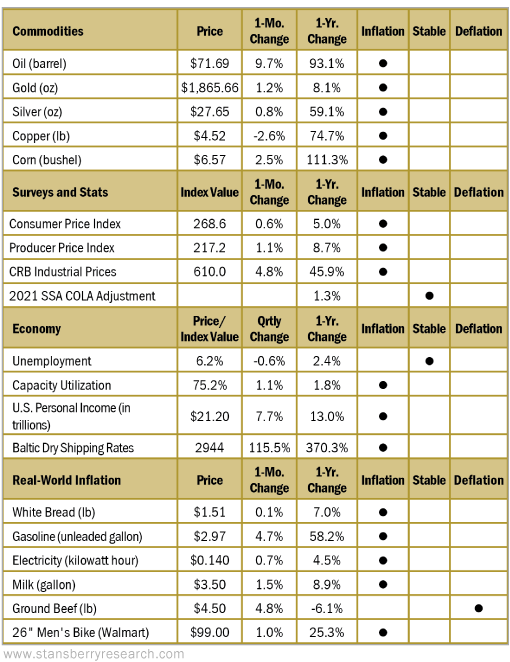 Now, this month's readings clearly reflect large "base effects." For instance, in June of last year, oil sat below $40, clearly due to pandemic-related shutdowns. That makes the 58% increase in gasoline prices, the 93% jump in oil, and the wild 370% rise in shipping rates "transitory."

However, it's obvious there's also still an underlying rise in inflation.

So whether you like it or not, inflation is going to be an issue. Retirees should be concerned by it.

Editor's note: This morning at 10 a.m., Eastern time, Doc is going public with an urgent warning for American retirees. He'll expose the biggest danger to your nest egg right now... And just for tuning in, attendees will even get the name and ticker symbol of an investment that was created to protect your wealth from inflation. (No, it isn't gold.) Click here to watch this free event online.

One type of asset gets a bad reputation during times of inflation... But according to Doc, you might want to look at it in a different light. Corey McLaughlin shares the details in our recent Weekend Edition: The First Domino Just Fell... And Your Retirement Might Be in Jeopardy.

"If you've been putting off thinking about your retirement and how you'll fund it, it's time to start now," Doc writes. And while the best advantage you can give yourself is to start early, it's never too late... Learn more here: Who Wants to Be a Millionaire?

Thanks to a successful vaccine rollout over the past couple months, things in the U.S. are starting to return to normal. People are headed back to the office… Families are planning summer vacations… And folks feel more comfortable attending social gatherings. Today’s company is benefiting as the economic reopening continues…

Revolve (RVLV) is an online fashion retailer that caters to millennials and Generation Z. It carries more than 500 brands and sells everything from athleisure to cocktail attire. Revolve did well as online shopping, loungewear, and activewear became popular with folks stuck at home. And now that people are headed outside the house – and dressing for it – business is booming… Revolve saw record sales of $179 million in the most recent quarter, up 22% year over year. And it made record income of $22 million – up an astonishing 435%.

As you can see, RVLV shares have surged 300% over the past year. They recently hit a new all-time high, too. As the “return to normal” continues, retailers like Revolve should do well… 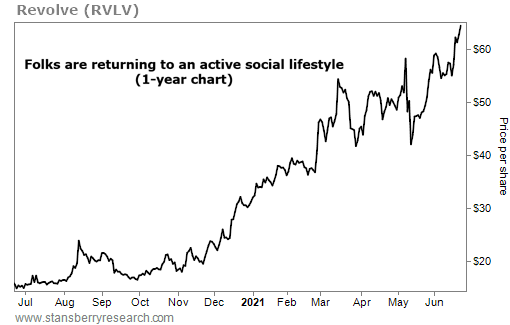