The Four Attributes of a Moonshot
By Austin Root
Saturday, December 26, 2020

Editor's note: In today's Weekend Edition, we're taking a break from our usual fare to share an essay from our friend and colleague Austin Root. He walks through the key ingredients that make up "moonshot" winners... Plus, he reveals why now is the perfect time to invest in these small, potentially explosive stocks.

In 2018, Stansberry Research's top analysts convened for one purpose: to find investments with life-changing potential.

Nearly 30 of our analysts and gurus – including Dr. David Eifrig, Dan Ferris, and Dr. Steve Sjuggerud – participated... either in person or by dialing in from some other part of the world.

And they began to hunt for what they termed "moonshot" companies... companies that can turn a small stake into enough money to buy a car, pay off your debts, or even retire early to live the life you've always dreamed of.

These are the kinds of returns many individual investors expect to get when they buy shares of the "FAANG" stocks (Facebook, Amazon, Apple, Netflix, and Google).

Yes, the FAANGs are world-class companies. And they did deliver outsized gains in the past... but only for investors who got in when the companies were still small. Today, the FAANG stocks are behemoths. So it's much harder to move the needle.

Today, I'll share the four attributes of moonshot companies. And I'll show you a surprising reason they're set to outperform in 2021 – and beyond...

The best way to produce truly life-changing gains is to invest early – and stay invested for the long term.

This is a straightforward concept. The power of compounding returns is greater the longer you own something that's growing. And it pays to get in early...

Take Warren Buffett and Berkshire Hathaway, for example. From 1965 through the end of 2019, the S&P 500 Index has averaged a gain (including reinvested dividends) of nearly 10.1% per year. Under Buffett's leadership, Berkshire Hathaway's average gain has more than doubled that return at 20.3% per year.

But over just the past 10 years, Berkshire's returns have actually trailed the S&P 500's. That's because the bigger Berkshire got, the harder growth became. As Buffett said...

The highest rates of return I've ever achieved were in the 1950s. I killed the Dow... But I was investing peanuts then. It's a huge structural advantage not to have a lot of money. I think I could make you 50% a year on $1 million. No, I know I could. I guarantee that.

To generate explosive gains – the kind that true moonshots can provide – you need to be invested as, or even before, the explosion begins. That means investing while a company is still small.

Of course, there's still risk investing in smaller companies... arguably much more risk. After all, many more small caps fail and go out of business than larger, established ones.

That's where the next two traits come in. We must also look for growing companies that can scale efficiently.

We also want to find businesses with attractive "unit economics" – businesses that generate thick profit margins and strong returns on investment for each individual, incremental sale of their products or services.

Overall corporate profit margins for these companies may not look great yet, while they're in growth mode... But that's why we dig down to the per-unit level to see the potential before the rest of the world catches on.

Building all these factors into one comprehensive framework will give you the absolute best shot at achieving life-changing gains.

We also have the wind at our backs...

Small-cap stocks are now trading at one of the largest discounts to large caps in almost 20 years. One way to look at this is the price-to-book (P/B) ratio. It essentially gives you a quick idea of how much you're paying for a company's assets... So the higher the P/B ratio, the more expensive the stock. 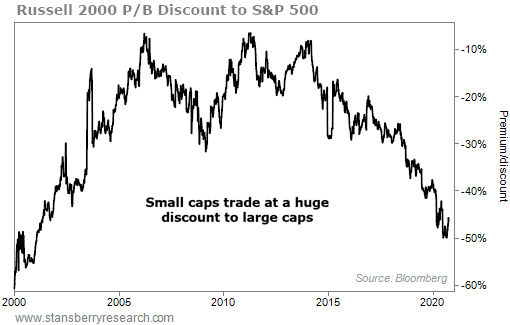 Now, small caps typically trade at a discount to large caps – but nowhere near this large. In fact, this is the cheapest it's been since around 2002 or so. And if you bought small caps back then, you would have yielded tremendous results...

The market conditions are perfect. This is a situation where carefully chosen moonshot opportunities can absolutely explode.

We're set to see incredible gains in the coming months and years. Now is the time to build your moonshots portfolio – and set yourself up for extraordinary returns.

Editor's note: Earlier this month, the average stock in Austin's model portfolio was up as high as 112%. Many have done even better... Five of his stocks are up more than 200% as we write – including three that are up more than 300%. Now, he's sharing the secret that has helped him pick so many winners. Check out the interview right here.