A few years ago, my father passed away...

He was a brilliant physician... but unlike most surgeons, he didn't have a lucrative private practice to support him in retirement. He was a professor at the University of North Carolina-Chapel Hill... a state employee.

And his wife, my stepmother – whom I've known and loved for more than 30 years – depends on the survivorship benefits from his pension. The problem was, that pension was hanging by a thread.

I've seen headlines for years about a "pension crisis" (as I'm sure you have too) and read occasional notes about small towns going bankrupt. I figured the pension problems were just fearmongering... or something that a little bailout from the federal government could fix.

When I dug into the numbers, I discovered that at the time, North Carolina's state-sponsored pension funds were only 51.3% funded, right on the edge of the crisis point. It made me furious.

The more I dug, the more I realized how much danger was facing my stepmother and millions of other retirees...

Nothing beats a government pension. If you (or a loved one) work for the government, you expect pension benefits to support you for the rest of your life.

If you're already retired, your check has shown up without fail, month after month. Your health care benefits are far better than most. And your money is practically inflation-proof, thanks to your cost-of-living adjustments.

Anyone would love to be promised those benefits in retirement. But what if that promise isn't kept? What if you work for decades... only to have a big part of your promised compensation taken away from you?

This isn't a hypothetical. It's happening. And it's going to happen to more folks soon.

Public pensions nationwide are crumbling. Legal loopholes are widening. If you don't take action to protect yourself and your loved ones, you could be left with nothing.

If you're currently retired, the coming American pension crisis could mean the elimination of cost-of-living adjustments, higher health care premiums, or even cuts to your base pension check. If things are bad enough, you may suffer a ravaging "clawback" – where the government repossesses a huge lump sum of your cash – and still cuts your monthly check.

Again, this is not a hypothetical.

In 2001, the vast majority of pensions were fully funded. Generally speaking, "well-funded" means above 80%. But 50% funding or less is considered the "crisis point." It's extremely difficult to come back from 50% or less.

According to The Pew Charitable Trusts – an independent research organization – pensions in Connecticut, Illinois, Kentucky, and New Jersey are less than 50% funded. In fact, New Jersey sits at the bottom of the list... Its pension is only 38% funded.

Only seven states are 90% funded.

If you're one of the tens of millions of affected Americans, you should know... you have zero control over what happens.

You can't increase or decrease the amount that's being invested. Also, companies hire managers who oversee where the pension money goes... And the fees they charge dilute returns.

Plus, if you die right after you retire, your dependents might get nothing.

But there is a solution...

You can move money from your pension into a self-directed individual retirement account ("IRA").

This gives you total control of your money. You get to grow your money tax-free, just like a pension... but there's no limit on how much you can make.

A self-directed IRA is exactly what it sounds like... It puts you in charge of your investments.

In addition to the conventional investments you can make in a typical IRA – like stocks and bonds – a fully self-directed IRA allows you to invest in many other assets, including real estate, private stocks, businesses, options, and even precious metals.

You can invest in just about anything, as long as it's not employed for your personal benefit. This simply means you must avoid any conflicts of interest. You can't, for example, invest in companies you have a 50% interest in. But you can buy the house next door through your IRA and then rent it to a neighbor. You can also invest in a local small business (again, as long as it's not your own).

If you do all your trading inside a retirement account, you don't have to report any trades to the IRS. The goal is simply to maximize your total returns as quickly and as easily as you can... and get better returns than a pension could offer.

There are two ways to move your pension to an IRA...

One is to "roll over" the pension directly into an IRA. The broker or custodian you're opening an IRA with should have all the necessary forms for you to fill out.

You can also take a lump-sum payment on your pension and then move the funds into an IRA. If you do transfer the funds within 60 days of taking the lump sum, you'll avoid being taxed on the money and the 10% early withdrawal penalty. (If you can, though, just roll over the pension directly – you don't want to risk incurring taxes and penalties at all.)

And make sure that you check with your employer's pension-plan rules for any fine print.

However you do it, don't wait. Why leave your pension – the money you're counting on for retirement – in someone else's hands?

Editor's note: This isn't the only crisis facing American retirees today. Right now, the pandemic (and the recovery underway) is accelerating a dangerous trend... one that was already chipping away at your wealth. That's why Doc is going on camera on Wednesday, June 23. He'll uncover the truth about what's happening, the crucial steps to protect your nest egg, and the name and ticker symbol of an investment that was created to shield your wealth from this threat... Click here to save your spot for this free online event.

One million dollars might sound like a lot of money. But nowadays, it might not be enough to live comfortably in retirement. Fortunately, it's never too late to start funding your retirement accounts... Read more here: Who Wants to Be a Millionaire?

"It's tough to gain an edge on the market when it's made up of some of the smartest financial minds in the world," Doc writes. That's why he put together a list of three common psychological traps... and how to avoid them to protect your wealth... Get the full story here.

Today, we’re looking at a growing trend in the tech industry…

The COVID-19 pandemic has accelerated many tech trends over the past year. One of the biggest has been the “cloud,” which helps folks collaborate online wherever they are. This market is expected to be worth a staggering $800 billion by 2025. That means big profits for companies at the center of this shift…

Arista Networks (ANET) sells cloud-based software and technology. It helps users process information faster and more securely. Arista’s customers range from large data centers to entire campuses and include big-name companies like Microsoft and Facebook. As folks increasingly turn to cloud-based tech to do work online – whether they’re back in the office or not – Arista reaps the rewards… Total sales for the company’s most recent quarter came in at nearly $670 million. That’s up almost 30% year over year.

As you can see, ANET shares have rocketed higher since COVID-19 first struck the U.S. They are up roughly 130% from their lows, recently hitting a new all-time high. As long as the cloud industry keeps on growing, this uptrend should continue… 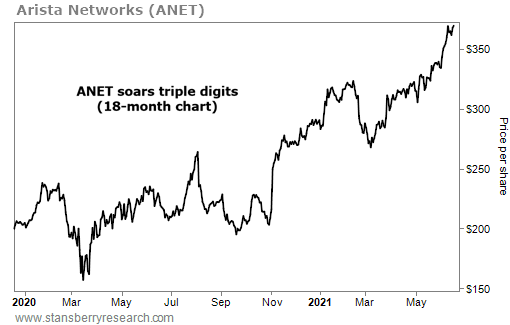