The One Indicator That Explains It All
By Dr. David Eifrig
Friday, April 30, 2021

The once-most-powerful man in the world describes his old job as 98% talk and 2% action.

Officially, the Fed's job is to stabilize the economy – controlling inflation and encouraging growth – by setting the country's monetary policy. When you oversee the world's largest economy at roughly $21 trillion gross domestic product, that easily makes you one of the most influential people in the world.

But Bernanke's comments show the job is as much about managing the public's mood as it is about manipulating interest rates and money supply.

Bernanke, his successor Janet Yellen, and current Fed Chair Jerome Powell have all communicated relentlessly with the public. The Fed signals every step it takes for months before it makes a move.

We've seen this recently... The Fed has been very transparent about when it plans to raise interest rates next. In short, it won't be for a couple of years. So folks have felt more comfortable buying into this expensive market.

The central bank takes this approach to avoid dropping surprises on the markets in the hopes they'll function more smoothly – at least as far as reactions to Fed operations go.

This approach reflects the fact that the economy and financial markets are made up of people.

And that's important today – because right now, people's actions are telling us everything we need to know about the state of the economy...

When the Fed wants to, say, boost growth and inflation, it can reduce interest rates as far as it wants... but inflation won't move until the public is comfortable enough to spend that money.

Similarly, the Fed can bail out every bank in the nation... but a credit crunch won't stop until everyone believes their money is safe and stops pulling it back in.

Cold, hard transactions make up the economy. And behind every transaction is a human decision. Consumers buy and businesses invest when they are optimistic about the future. Nothing can get an economy humming again like a widespread belief that the economy is improving.

Right now, you should look at the best indicator that explains the condition of the economy: the behavior of consumers.

Consumer spending makes up around 70% of our economy. It determines the decisions of virtually every business. It's the key driver of investment returns.

When you look at consumer spending, it's hard not to be optimistic. Spending has quickly rebounded from the pandemic, and it just recently hit a new high of roughly $15 trillion... 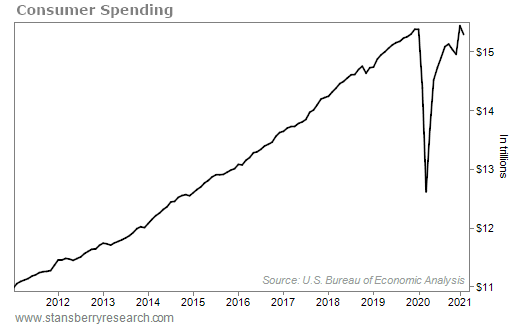 You can also look at consumer confidence to see this...

The chart below shows the Consumer Confidence Index, which is a survey administered by the Conference Board. It's a measure of how optimistic or pessimistic folks are regarding their expected financial situation. As you can see, confidence plunged last year. But it has been heading higher in recent months... 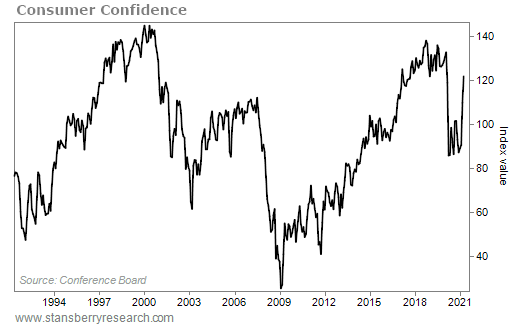 You should think of the behavior of consumers as the one indicator that explains it all.

Right now, things look good. Consumers are flush with cash, and they are spending.

And we'll likely see this spending continue. The progress with the vaccine rollout has been incredible. That means people can begin to plan vacations and start to travel more.

As long as folks are out and spending, things look good for the economic rebound.

Editor's note: Did you miss it? Last night in an online event, Steve shared a huge twist in his Melt Up thesis... something he hasn't talked about anywhere else. And he wants you to get ready before this powerful bull market reaches its peak. Those who tuned in to watch even received two free stock recommendations – and you can, too. Check out a replay of the event here.

Market euphoria has gripped investors. Normally, when everyone is piling into stocks, it's a bearish indicator that a Melt Down is coming. But right now we have a huge opportunity to profit... Read more here: Euphoria Has Gripped the Markets.

The rally in the U.S. stock market has led to some sky-high valuations lately. Thankfully, U.S. stocks aren't the only ones breaking out around the world. So if you're concerned about expensive stocks, this is an opportunity you can't pass up... Get the full story here: Buy This If You're Worried About Expensive U.S. Stocks.

Today, we’re highlighting a company that’s bouncing back from some bad news…

Longtime readers know we love finding companies that are going from “bad to less bad.” After a company’s shares have sold off, investors can earn solid gains as things return to normal. And this government contractor is a perfect example of this powerful trend…

Huntington Ingalls Industries (HII) is America’s largest military shipbuilder… And it consistently ranks among the Pentagon’s 10 largest contractors. But when the company’s profits fell short of estimates last year, investors quickly fled. Still, the company had a $45 billion backlog of government orders… meaning there’s still plenty of business for Huntington Ingalls. And sure enough, investors have piled back in – and now the company’s backlog stands at $46 billion.

As you can see in today’s chart, HII shares are rebounding. They’re up 36% from last year’s lows… And they recently hit a fresh 52-week high. Given that the Navy has a steady demand for Huntington Ingalls’ ships, it’s no surprise that this stock got “less bad”… 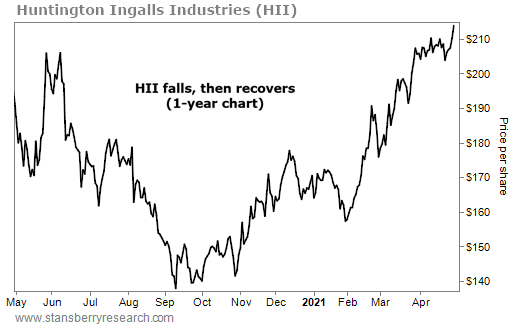