'The Price of Prosperity': When Great Businesses Fail
By Dan Ferris
Wednesday, February 24, 2021

When they were young, poor, and hungry for success, they had little to lose and everything to prove. So they worked, risked, and managed their way to a fortune.

Now old and rich, they have much to lose, nothing to prove, and tend to avoid risk-taking.

Think Ebenezer Scrooge. He started out as an ambitious yet carefree young man and wound up rich, stingy, and bitter (before Jacob Marley and the three spirits showed up, of course).

Economist and author Todd Buchholz's 2016 book, The Price of Prosperity: Why Rich Nations Fail and How to Renew Them, addresses this tendency of rich nations to fail due not to economic failure, but to the problems brought about by economic success.

The "price of prosperity" dynamic also influences successful companies. Their success attracts younger, smarter, hungrier competitors who are only too eager to take all the risks and make all the decisions that the established businesses are too scared to make.

I've been warning investors about this since 2017. As I've said, the greatest businesses in the world can generate poor returns or even big losses.

And you don't have to go far back in time to see how such businesses – and their shareholders – paid dearly for the prosperity they generated...

Back then, everybody thought they were the most fantastic businesses in the world. They were the safe, blue-chip, "no-brainers"... They were "one decision stocks" because the only decision you needed to make was to buy them – with no need for deep, fundamental research – and, by implication, never even consider selling them.

Microsoft finally eclipsed its dot-com highs after 17 years. But the other four have yet to break even... two decades later.

These companies have paid for their former prosperity by generating disappointing results and disappointing investment returns...

For example, GE – now a shadow of its former self – fell so far from grace that one famous analyst called it "a bigger fraud than Enron." The manipulations that helped GE generate steadily rising earnings and a rising stock price also sowed the seeds of its inevitable downfall. The financial results weren't nearly as good as the company had reported for several years. The market found out about it, and the stock tanked.

Cisco, ExxonMobil, and Pfizer are still good businesses that have offered chances to profit over the past 20 years – but they have not lived up to the "one decision" promise.

It's one thing to pick five stocks and only have one of them do very well. That's a rather typical outcome. But it's another thing entirely to dub five businesses "the best on Earth" and proclaim them riskless bets on the future of the global economy – then mostly get it wrong.

The dot-com-era doubters were mostly right. I suspect today's doubters will be proven right sooner rather than later, too. And you can count me among them.

The price-of-prosperity dynamic is bearing down hard on the most successful companies of our era...

These are the no-brainers and one-decision stocks of today. They're the ones nobody questions. They're the businesses everybody and their brother believes will deliver stellar results and investment returns forever.

When the COVID-19 pandemic hit our shores back in February and March, investor and writer Howard Marks' proverbial "pendulum of investor psychology" careened toward extreme pessimism. Investors wanted out of stocks, and panic selling ensued.

Now, the pendulum of investor psychology has swung to the other extreme...

Our research indicates the gap between expectations and stock fundamentals has narrowed so much that most businesses are now trading at, or even above, their intrinsic value estimates. (Intrinsic value is an estimate of the highest price a business would likely command, based on its future free cash flow generation.)

When businesses are widely trading near intrinsic value, their upside potential is limited. This is particularly true of the largest tech stocks comprising the Nasdaq 100 Index. That index has soared 90% since its March 2020 low, beating the S&P 500 by 19 percentage points.

In other words, today's tech darlings are leading the mania. Expectations are high. And we must prepare for the possibility of a significant move lower.

Investors in big tech names like Apple and Amazon are doing today what they've done for much of the past decade: assuming the next several years will look a lot like the recent past.

Generating strong top-line growth year after year while also maintaining solid margins is no small feat. The fact that many big tech names have been able to accomplish this explains why they've been exceptional investments over the past decade.

Editor's note: Dan just came forward with the best opportunity he has seen in 20 years. It's a stock he believes could triple quickly – and become a 10-bagger over the long term – with LESS risk than most stocks out there today. Find out why our firm's most cautious analyst is "all in" on this idea right here.

"Stocks are riskier right now than they've ever been before," Dan writes. With the Melt Down looming in the near future, stocks are likely to be in for a bumpy ride. If you expect your portfolio to survive, you need to consider this asset to protect your wealth... Read more here: Stay Sane This Year With 'True Diversification.'

"The impossibility of knowing the future is why you must prepare for it," Dan says. Even though no one can predict the future, you should still be ready for whatever comes next. And that means getting ready today... Get the full story here: You Can (and Should) Believe in Getting Ready for Tomorrow.

As regular readers know, we like to use certain companies as real-world economic bellwethers. They tell us if products and services are in demand, and if money is moving through the economy. Although COVID-19 continues to disrupt many industries, today’s construction company shows us that the global recovery is underway…

Caterpillar (CAT) is the world’s leading manufacturer of construction and mining equipment. The company does business on every continent, with more than 4 million CAT products at work around the world. Last year, the company’s sales fell to $41.7 billion – down 22% compared with 2019. However, Caterpillar’s quarterly earnings have beaten expectations three times in a row. And the continued rise in copper prices has been good news, too… suggesting more demand ahead for Caterpillar’s mining equipment.

As you can see, shares are up more than 135% since bottoming with the rest of the market early last year… And they recently hit an all-time high. That’s a good sign for the global economy today… 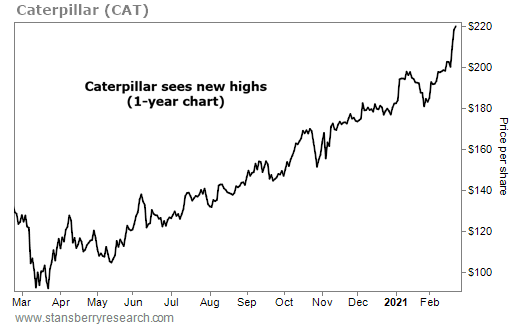