Yesterday in DailyWealth, I talked about three important lessons I learned from more than two decades on Wall Street.

These are some of the most important things you can do as an investor to improve your long-term results and build lasting wealth in the markets.

Today, we'll continue with more keys to long-term success, starting with Rule No. 4...

There's an old saying on Wall Street that goes, "Net income is an opinion, but cash is a fact."

Net income – the bottom line of the income statement – is the number that investors tend to focus on. How often have you read a headline along the lines of: "XYZ's stock is down today because the company missed earnings expectations"?

Because of this, management teams often try their best to "manage" net income. Usually, this doesn't entail outright fraud. Rather, net income can be manipulated by rushing products out the door at the end of each quarter (thereby boosting revenue) or reducing assumptions for uncollectable accounts, warranty costs, depreciation, and the like.

A great example is telecom-equipment maker Lucent, whose stock peaked in 1999 at $84 a share. The company had beaten analysts' estimates quarter after quarter. And it was booking big sales and profits, reporting $3.8 billion of net income in the first three quarters of 1999 versus just $815 million in the same period in 1998.

But the cash-flow statement told another story... Cash flow from operations was negative $1.3 billion in the first three quarters of 1999 versus positive $1.6 billion the previous year – a negative swing of $2.9 billion!

It turns out that Lucent was selling equipment to many dicey startup companies that were increasingly having difficulty raising capital. And without new cash, they couldn't pay for the products Lucent had delivered to them...

Savvy investors who paid attention to the cash-flow statement and got out saved themselves from a bloodbath. The stock collapsed to around $2 a share.

Various studies have shown that 70%-90% of acquisitions fail.

It's not hard to see why. Sellers have perfect information and generally only opt to sell when the company and/or industry is at a peak. And buyers tend to be overconfident and are often motivated by empire-building or other noneconomic factors.

Plus, hiccups (or worse) are common when integrating two companies, which may have different cultures and systems. Lastly, it's easy to play games with the numbers when acquisitions occur, greatly increasing the chances of accounting fraud.

For all of these reasons, it's generally best to view highly acquisitive companies with a skeptical eye.

That said, this isn't a hard-and-fast rule because there are a few notable exceptions...

For example, Warren Buffett's Berkshire Hathaway (BRK) has made dozens of acquisitions over the years, nearly all of which have worked out beautifully. In fact, Berkshire's acquisition of National Indemnity back in the 1960s provided the entire foundation for Buffett's $500 billion empire.

We've also seen brilliant acquisitions from Alphabet (GOOGL), which bought video-streaming platform YouTube in 2006 for $1.7 billion... and Facebook (FB), which purchased Instagram in 2012 for $1 billion. Both of those acquisitions have added tremendous value to their respective companies over the years.

In summary, be careful! When it comes to acquisitions, history has shown that more things go wrong than right.

During my nearly two decades of managing money, my primary focus was on buying and holding undervalued stocks. But I also shorted hundreds of stocks over the years.

Shorting is a brutally difficult endeavor. Overall, I lost a lot of money doing it. So my advice to nearly all investors is simple: Don't! It's too hard and too risky.

That said, you'd be well-served to learn about what short sellers look for. It will help you avoid "value traps" – stocks that appear attractive, but end up going nowhere (or worse, down a lot).

To survive, short sellers have to be very smart and do outstanding in-depth research – far more so than traditional long-only investors. Thus, if you're considering buying a stock with a high short interest, stop and do even more research.

Here's a good rule of thumb: Any time you plan to go long a stock with a short interest of more than 5% of the shares outstanding, watch out. It means that a lot of sharp investors are betting against you, and you need to figure out what they're seeing.

Though I'm cautious of companies with a high short interest, there are occasional exceptions. In fact, some of my best long ideas have come from stocks that are popular among the shorts because it reflects extreme negativity toward a stock.

But I wasn't dissuaded. I knew who was betting against it (and why)... and I was convinced they were wrong. So I pitched it at my investing conference... wrote about it... and appeared on CNBC telling folks it was going to be the next Amazon (AMZN).

The company's market cap has since gone from $3 billion to $160 billion, and it's been a popular short the entire way up. I'd estimate it has cost the short sellers about $30 billion – yet there's still a 4% short interest!

That said, I'd urge you to have tremendous respect for short sellers. Any who have survived this historic 10-year-old bull market have had to be good. They've been swimming upstream against a powerful current for the past decade!

The best investment ideas can usually be explained in writing in one page or verbally in a couple of minutes. And their success is usually dependent on a few factors – sometimes only one – that need to be analyzed and evaluated.

But it's easy to forget this with the Internet at your fingertips and round-the-clock coverage of the markets. Investors are bombarded with so much information that it can be almost impossible to separate the signal from the noise.

Doing so is critical to long-term investment success... Follow these rules, and you'll be much closer to achieving it.

Editor's note: Whitney is one of the biggest names in finance. Today, he has found several world-class businesses whose stocks could skyrocket as the Melt Up takes off... And he's sharing them all in his brand-new investment advisory, the Empire Investment Report. Right now, you can gain access to one year of his research at a huge discount – the equivalent of getting four months for free. Learn more about it right here.

"The financial news is a never-ending supply of new information," Steve writes. Like Whitney, he says you need to separate the signal from the noise. It's hard work – but one tool can help you stay on track... Read more here.

Watching the short sellers is a great way to protect yourself from value traps. But that's not all... As Whitney explains, several traits can help you tell the difference between a great deal and a piece of junk. Learn the red flags to avoid right here.

Market Notes
A SOLID LONG-TERM UPTREND FOR ELECTRICITY IN MICHIGAN

The utilities sector is known for its safety. Electricity or water companies often face little or no competition… and sell products that customers can’t do without. Revenues are predictable, and profit margins – though limited – are regularly government-guaranteed. Today’s company is another example of why investors should love this industry…

DTE Energy (DTE) provides electricity and natural gas to homes and businesses in Michigan. That’s not very exciting. But its $400 million profit in the most recent quarter – up 11% from this time last year – is good news for investors. The company has also paid dividends for more than a century, with shares currently yielding about 3%.

The company’s performance has been strong in recent years. While it hasn’t been a one-way trip, shares are up roughly 70% over the past five years… And they recently hit a new all-time high. The utilities sector doesn’t just mean safety – it means healthy returns, too… 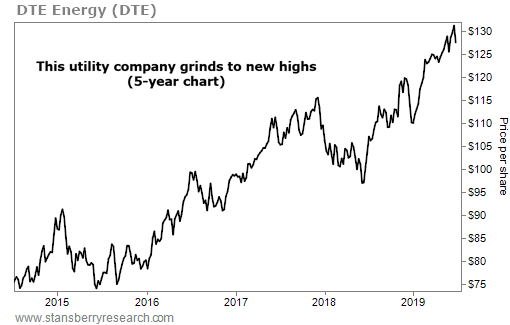