While Microsoft is mostly known for its Office products and its cloud-computing business, it has been involved in the video-game industry for years. Microsoft created Xbox – one of the most popular gaming platforms in the world.

With this acquisition, Microsoft would become the world's third-biggest gaming company. Shares of Activision surged 25% on the news... But Microsoft shares were down slightly.

Today, I'll share what this means for investors. We'll answer the big question: Is Microsoft a buy?

Activision is a legendary gaming publisher with timeless titles like Call of Duty and World of Warcraft.

These powerhouse brands afford Activision a great luxury... All Activision has to do is come out with a new version of Call of Duty or World of Warcraft each year, and fans rush for their credit cards.

This makes sales more predictable than they usually are in the volatile gaming market. Some other video-game publishers have to strike gold with new titles every year to be successful.

Gaming has been a rapidly growing industry over the years. According to Bloomberg, global video-game revenue was about $105 billion in 2016. It nearly doubled to $180 billion in 2020. And it's expected to cross the $200 billion threshold by 2024.

As the chart below shows, gaming is bigger than the movie industry... 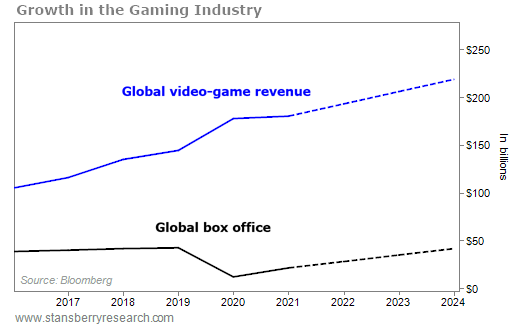 Though Microsoft paid a steep price for Activision, my team and I like the merger. If the Federal Trade Commission approves it, these new games from Activision will help Microsoft expand its own offerings for the Xbox console. It will also help the company compete with rival Sony (SONY), which makes the PlayStation console.

Now, let's see if Microsoft can afford this $68.7 billion mega-deal...

At the moment, Microsoft is sitting on $20.6 billion in cash and has $80.3 billion in total debt. That gives the company a net debt (debt minus cash) position of $59.7 billion.

To see if a company is overleveraged or not, we like to compare net debt with earnings before interest, taxes, depreciation, and amortization ("EBITDA"). We use EBITDA because it's often a shortcut to estimate the cash flow available to pay off debt.

The net-debt-to-EBITDA ratio shows how many years it would take for a company to pay back its debt. The higher the ratio, the less likely a company is to handle its debt burden... and the less likely it is to take on more debt to grow the business.

We typically like to see a company with a net-debt-to-EBITDA ratio of less than 4.

Over the past 12 months, Microsoft was able to generate $93.8 billion in EBITDA. So when you compare its net debt with EBITDA, it has a ratio of less than 1.

Microsoft has a fortress-like balance sheet. It can most definitely afford to take on more debt.

Moving forward, Microsoft will have two ways to grow sales... First, it can see terrific growth from its cloud-computing business, Azure, which has year-over-year growth of about 50% for each of the last 10 quarters...

Second, Microsoft's new gaming business can help the company grow. Global video-game sales are projected to rise by more than 20% by 2024.

Shares of Microsoft are down by about 10% this year. My advice is to take advantage of the dip and buy shares today if you don't already own the stock.

Editor's note: Just recently, Doc and his team also recommended a bullish options trade on Microsoft. While it's too late to act on that specific trade, it's not the only way they're capitalizing on market volatility – far from it. Twice each month, Doc's Advanced Options service shares trades designed to double or triple your money, using Stansberry Research's top recommendations... Learn how to access it for an 80% discount here.

Corrections are a normal part of the market cycle. It isn't uncommon for a sector to fall 5% or 10% during a bull market. It's exactly what we saw last September. And history tells us staying long is likely the right move today... Get the full story here.

It's impossible to predict exactly what will happen next in the markets. Even the smallest changes in stock prices can have a big impact on your wealth. If you want to be ready for anything, you need to do this with your portfolio... Read more here: Do This After Big Tech's 'Volcanic Eruption'.

Market Notes
WHEN EVERYONE IS ON BOARD, THE ONLY PLACE LEFT TO GO IS DOWN

Today’s company shows the dangers of investing in “fad stocks”…

Regular readers know that trendy, gimmicky stocks can make for dangerous investments. If everyone is talking about a company, buyer beware… Once everyone has bought in, the stock can only go down. Today’s chart shows what can happen when a fad stock “loses its magic”…

Stitch Fix (SFIX) is an online clothing vendor. It combines human stylists and algorithms to sell curated outfits to its clients. Thanks to the pandemic-driven online-shopping surge, the stock soared from its 2020 low… even forcing a short squeeze near the end of its run, according to Barron’s. Shares rose more than 770% to their January 2021 all-time high. But when the rally got ahead of the company’s potential, prices crashed back down to Earth… And the company’s results continued to disappoint Wall Street throughout the year.

SFIX shares have drifted lower. They’re down more than 80% over the past year – almost back to their COVID-19 lows. As you can see, when everyone jumps on board a trend, the only place left to go is down… 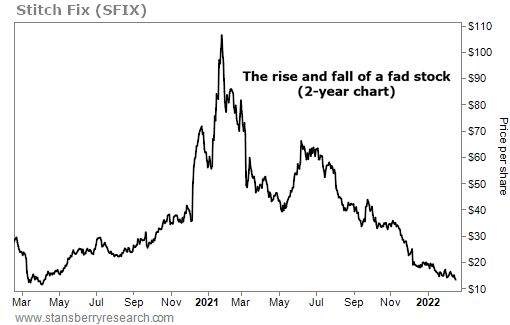