Tomorrow Will Not Be Like Today
By Dr. David Eifrig
Wednesday, June 12, 2019

One of the most dangerous – and most heavily entrenched – behaviors in the human psyche is extrapolation.

For centuries, the time it took a ship to cross the Atlantic stayed constant at around six to eight weeks. An extrapolator at the time might have said that it would always take around that long.

But then, the modern cruise ship came along, dropping transatlantic crossing times to less than a week. Extrapolate based on that improvement, and you would project crossing times to keep improving. Even so, you'd still have no idea how fast crossings were about to get...

Charles Lindbergh blew out the projection in 1927 by flying from New York to Paris in 33.5 hours.

But if you take that rate of improvement, you might think today we should be able to cross the Atlantic in less than 20 minutes. Now your extrapolation would be too optimistic.

Everyone knows that extrapolating into the future is a bad idea. You know this... Investors know this...

And yet, everybody keeps doing it.

Today, we'll look more closely at the problem with extrapolation. And I'll share what you should be doing instead to grow and preserve your wealth.

We'll begin with the stock market...

At the start of the year, the market took one heck of a ride higher. It was one of the sharpest "V" shapes we've ever seen. Look at this on the chart below, and it almost looks like the time scale has been warped. 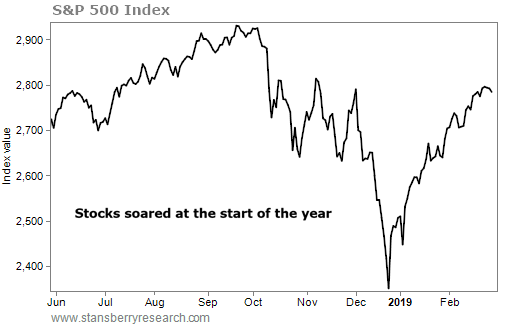 Clearly, this level of growth couldn't have kept up. At that rate, the market would return about 68% for the year. (For comparison, the biggest prior one-year move in the S&P 500 was a 45% gain in 1933, following the Great Depression.)

According to the American Association of Individual Investors ("AAII") Investor Sentiment Survey – which asks investors if they are bullish, bearish, or neutral – the number of bullish investors hits its lowest point whenever the market bottoms. When we checked in on it in February, it had soared above 39%... a high reading. (Look at the six-month moving average in green for a smoother view.) 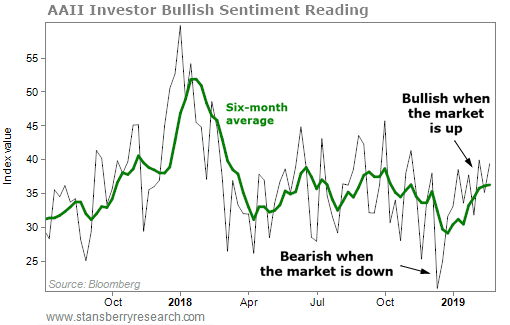 This is what makes extrapolation dangerous... The crowd bases its expectations on its own short memory and ends up blowing around with the wind. It bounces between impossible hope and bitter disappointment. It's no wonder how quickly investors cooled off last month as trade-war tensions hit the market.

You need to recognize the truth: Tomorrow will not be like today.

This is not only true for the stock market, but for the economy as well. Consider this final example...

In the decades after World War II, the global economy – and particularly the U.S. economy – saw an incredible boost in wealth.

The miracle reached new heights in 1973, "when average income per person around the world leaped 4.5%," economist and historian Marc Levinson wrote in his book An Extraordinary Time. "At that rate, a person's income would double in 16 years, quadruple in 32. Average people everywhere had reason to feel good."

But they shouldn't have. Those income levels never materialized...

If you took the 2.8% average growth rate in real per-capita gross domestic product (GDP) from 1950 through 1973 and allowed it to continue, you'd expect each American today to earn $93,863 per year. 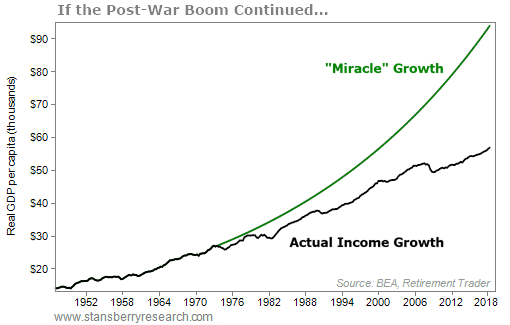 The urge to extrapolate is almost irresistible. We're built to make these kinds of assumptions. Even babies who see an object in motion can anticipate where it will be a few seconds later.

But this gut feeling falls apart when we apply it to the realms of technology, society, and finance.

So instead of extrapolating about what will happen next in the economy or in the stock market, prepare for the unexpected.

Keep a healthy piece of your portfolio in hedged positions like gold and precious metals. Investors see gold as a safe-haven asset. It should hold its value – or even rise – if the market falls.

If you use a mix of diversified assets and strategies, your portfolio will be much better positioned for whatever comes next. You'll soon stop extrapolating... and start investing.

Editor's note: Next week, Doc is holding his first-ever Trading Master Class to demonstrate a crucial strategy for your investor's tool kit. It allows you to trade virtually any stock with just a couple hundred dollars... And it's designed to achieve returns up to 10 times higher than you'd get buying the same stocks outright. You can watch the demonstration online for free on June 19 at 8 p.m. Eastern. Save your spot right here.

"Many investors just can't cut their losses and move on," Doc says. "Folks become emotional with stocks that turn into losers." Learn more about his simple step to get around this mental hang-up here: A Better Way to Stop Losing to the Neighbors.

"We often make real, costly mistakes worth hundreds of thousands of dollars when investing or planning our retirement strategies," Doc writes. Investors make one mistake all the time... but you can avoid it with his strategy to clean up your portfolio. Read more here.

Today, we’re revisiting one of the titans in the tech industry…

Regular readers know you can make good money investing in what Doc calls “digital utilities.” Just as utilities like gas and water are indispensable in our everyday lives, we use apps and programs constantly in today’s tech-driven world. And today’s company is a leading maker of digital tools…

Microsoft (MSFT) is a tech powerhouse, providing computers and software that we use every day. Whether you’re using a PC or a Mac, you’re probably using a lot of Microsoft’s products. That includes its Office suite and cloud services like OneDrive, found in workplaces around the world. And sales are still stacking up… In the latest quarter, demand for cloud services drove Microsoft’s commercial cloud revenue up 41% year over year. And overall sales increased 14%.

As you can see, MSFT has steadily marched upward, hitting all-time highs along the way. In April, the company even reached a whopping $1 trillion in market value. Clearly, it pays off to invest in the tech we can’t live without… 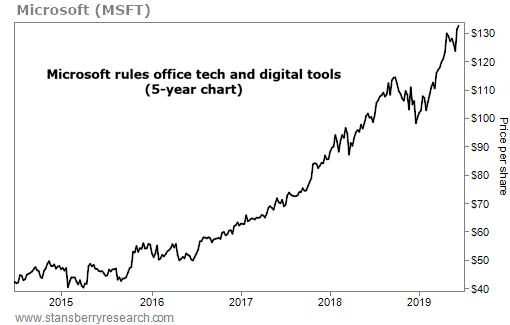 Owning safe assets can help you survive during times of crisis. And this asset is as safe as they come…

Recent Articles
Two Positives of a Painful Market
By Brett Eversole
The Simple Way to Read Volatile Markets... And See What's Next
By Greg Diamond, CMT
Investors Sell Stocks at Record Levels
By Brett Eversole
When a Value Trap Turns Into a Value Play
By Chris Igou
We're Witnessing the 'Running of the Stock Market Bulls'
By Corey McLaughlin
Recent Market Notes
A 'BEARISH BELLWETHER' FROM THE TECH WORLD
Thursday, May 19, 2022
TODAY'S MARKET IS PUNISHING THIS DISCOUNT RETAILER
Wednesday, May 18, 2022
AMERICAN SENIORS ARE A MAJOR BASE FOR THIS DRUGMAKER
Tuesday, May 17, 2022
HIGHS AND LOWS
Monday, May 16, 2022
RISING COSTS ARE WEIGHING ON THIS ICONIC TIRE MAKER
Friday, May 13, 2022