Editor's note: If you want to learn how to make money, figure out how successful investors do it... Then, do what they do. This is a key part of Steve's philosophy. And today, we're following it by sharing this essay from 2015. It contains two pieces of wisdom from the greats...

How do rich people continue to make money?

What do they do differently?

I recently asked two guys who would know – David Hall and Van Simmons.

David and Van are legends to me. These guys know what works in investing outside of the stock market. But their insights apply to stocks as well.

We talked about two distinct reasons rich people make money with investing. Today, I'm going to share part of that conversation with you...

David: They do their homework. And I've found that a lot of the real wealthy people are very much contrarians. Maybe it's the sense of self-confidence that helped them be successful in business or whatever they were successful in.

There's such a herd mentality... We had people [when gold was] at $1,900 screaming on the phone that they had to have their gold today, and where are these people [now]?

David: Yes, at $1,900. I've found that wealthy people have the self-confidence to buy when there's blood in the street. Now it's not that bad. But, you know, when things are a little out of favor, and they're high-quality (in terms of both the quality, the condition, and in terms of their importance), that's the time that you want take a position.

Van: That's the hardest thing to do. For example, in 2010-2011, I called a couple of real estate friends of mine. I said, you know, I'm interested in buying real estate.

It was really hard to get even friends of mine who are real estate guys interested. I'd say, "Well, what about building things? What about doing this?" And they're like, "You're insane. I wouldn't do this now. You're smarter than that." And I'm going, "OK, well if the guy selling real estate is a friend of yours and he's telling you not to do it, you're probably pretty close to the bottom."

According to David and Van, rich people...

Buying against the crowd is tough. From personal experience, I've learned that it's unsettling when you're the only one buying like Van was when he bought that condo. But that's often when you have the most upside potential. You have to trust your experience and your homework in those situations.

These are two ways that rich people continue to make money, for years and years.

If you want to continue making money like wealthy investors do, then follow David and Van's advice.

"If there's one person you should listen to and learn from, it's Warren Buffett," Dr. David Eifrig explains. Find out three key ways you can follow his example – and make more money in stocks – right here.

"Once the market realizes its mistake, the gains can pile up fast," Whitney Tilson says. Buying hated investments will feel uncomfortable at first. Learn more about the thought process behind contrarian trading right here.

That’s why we like to look at companies that “sell the basics” – like pet food. According to the American Pet Products Association, 68% of American households owned a pet as of 2016 – including around 90 million dogs and 94 million cats. That’s a lot of pets to feed every day. And today’s company has carved out a niche in that market…

Freshpet (FRPT) makes healthy pet food. The company cooks it up – using farm-raised meat and all-natural ingredients – and delivers it to grocery-store refrigerators across the U.S. As Americans continue to dote on their pets, they’re opting for Freshpet’s higher-quality pet food… The company recently reported net sales of $65 million for the third quarter. It was an increase of 28.5% year over year… and the eighth consecutive quarter that Freshpet has achieved 20% revenue growth.

As you can see, FRPT is up around 480% over the past three years, recently hitting a new all-time high. As people make healthier everyday choices for their pets, that growth should continue… 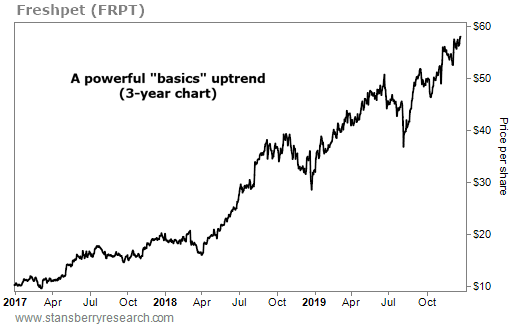