We Can't Escape the Next Recession... But We Can Do This
By Mike DiBiase
Wednesday, May 4, 2022

Editor's note: Investors are scared today. At DailyWealth, we see this as a contrarian signal. But we can't know when the next recession will strike... And the best time to prepare is before it does. So today, we're sharing an essay from our colleague Mike DiBiase. He explains why we may have to learn to live with higher inflation... and why the Federal Reserve is fighting an uphill battle.

Prices have been rising across the economy. Everyone is talking about it... It's the Federal Reserve's biggest concern today.

And it should be. The latest inflation reading in March was 8.5%, the highest in more than 40 years. The last time inflation was this high was 1981 – when Indiana Jones and the Raiders of the Lost Ark was the hottest movie in theaters, and the world hadn't yet learned the term "computer virus."

Today, I want to cover why I think high inflation isn't going away anytime soon... And I'll share my predictions for the remainder of 2022 and beyond.

To cut to the chase, it's not a pretty picture.

Inflation is going to get worse before it gets better...

In other words, we're not even at peak inflation yet. I expect the rate of inflation will get worse over the next few months.

Later this year, the rate of price increases will start to come down... But don't expect it to get close to the Fed's 2% target rate for a long time.

Why do I believe that? All you have to do is follow the money supply...

Despite what the mainstream financial media or Fed Chairman Jerome Powell tells you, the money supply is the primary driver of inflation.

In economics, it's called the quantity theory of money. This theory was first developed by astronomer and mathematician Nicolaus Copernicus – the guy who figured out that the Earth revolved around the sun – more than 500 years ago.

The chart below shows the U.S. M2 money supply (black line). That's the cash, checking, savings, and money-market mutual-fund accounts held by households and businesses. The gray line is the annual change in the money supply over this period. Take a look... 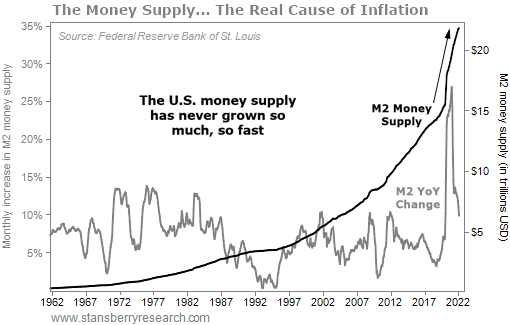 In the latest monthly reading published in late April, the money supply in March soared to a record $22 trillion...

As you can see, most of this increase has come since the start of the pandemic. Since then, the money supply has exploded 41%... or $6.4 trillion higher. Never before in history has our money supply grown so much, so fast.

You can't increase the money supply by more than 40% in two years and not expect to get persistent inflation. It's the law of supply and demand... With more dollars chasing essentially the same amount of goods and services, prices are going to go much higher.

It takes around 12 to 18 months for the increases in the money supply to make its way into the economy. The money supply increased by 20% or more each month starting in May 2020 and didn't peak until February 2021. That's why I expect inflation will continue to get worse before it gets better.

And yet, you hardly ever hear Powell mention the money supply. He loves to talk about supply-chain bottlenecks and energy prices, but not the root cause of the problem. It's as if Powell has never heard of Copernicus' theory.

The great economists of our time know the money supply is what truly matters. Economist Milton Friedman – who won the Nobel Prize in 1976 – said: "Inflation is always and everywhere a monetary phenomenon, in the sense that it is and can be produced only by a more rapid increase in the quantity of money than in output."

Maybe Powell still thinks the Earth is the center of the universe.

The irony is, the Fed created today's high inflation...

Following the pandemic, the Fed has purchased trillions of dollars' worth of U.S. Treasurys with money it created out of thin air with a few computer keystrokes.

That massive injection of liquidity put out the "fire" and pulled us out of a post-pandemic recession. But the Fed left the fire hose on for far too long and flooded our house... As a result, we are now all knee-deep in inflation.

By not removing its support quickly enough, it has made things far worse.

In short, we all need to learn to live with much higher inflation. That's because the Fed can't win the battle against inflation without losing the war...

To fight inflation, the Fed only has two arrows in its quiver: raising interest rates or decreasing the money supply. And it can't do either by a little.

The Fed needs big, bold actions. The rate hikes it has planned for this year won't be nearly enough...

The expected rate hikes through the end of 2023 will only increase rates to around 2.8%. That will just get rates back to around what they were in early 2019, when inflation was less than 2%...

If the Fed is serious, rates need to go up much faster.

But that would also cause big problems. If rates suddenly went up by four or five percentage points, the additional interest cost would cause a massive wave of bankruptcies. That would translate into enormous write-offs for big banks. Credit would tighten, and it would send shockwaves across the global economy – plunging the world into a recession.

There is simply too much debt today to support the kind of interest rates needed to get inflation under control. Households, businesses, and the government have all gotten much fatter with debt since the last financial crisis.

The only reason these bloated debt balances can be serviced is because of today's historically low interest rates... We've grown completely dependent on them.

The Fed's only other option for fighting inflation is to decrease the money supply... And that won't work either.

To decrease the money supply, the Fed can either sell its Treasurys or require banks to tighten credit.

Both options would result in the same thing... a popping of the credit bubble and the start of another recession.

Just look at what has happened since the Fed began talking about tapering its purchases of Treasurys in late 2021. Interest rates have been steadily rising since... 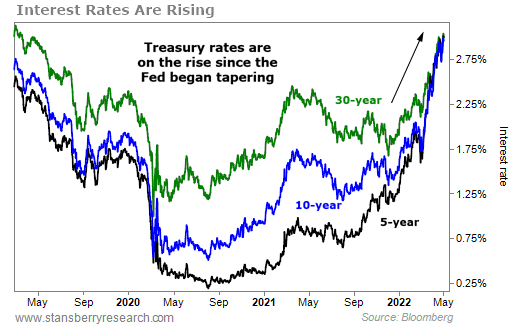 Imagine how fast rates would rise if the Fed started selling its Treasurys. Rates would soar.

The problem with raising interest rates or decreasing the money supply is that doing either by more than a little will kill the economy. It will plunge us into the even more feared "R" word... a recession.

The Fed knows the "I" word is better than the "R" word.

That's why I think we'll soon see the Fed begin to embrace higher inflation... I predict it will revise its 2% inflation target to something in the 4%-to-5% range.

But even hitting that target will be tough.

The only thing that will work is the Fed reversing its past mistakes with the same vigor... by raising interest rates or decreasing the money supply.

Which leads me to my last prediction...

Despite the Fed's best efforts, a recession is coming this year...

Costs are rising for everyone. Inflation will continue to shrink corporate profit margins. It will eat up more and more of every American's budget. Debt will become more burdensome. Growth will slow...

But that doesn't mean you should suffer.

There are lots of ways to protect your portfolio from inflation, including allocating a portion of your portfolio to gold and gold stocks... and buying only the highest-quality companies that stand to benefit from rising prices.

You should be preparing now to profit.

Editor's note: If you're wondering what to do next – you're not alone. That's why our top analysts at Stansberry have created a specific, top-to-bottom plan to help guide you through the uncertain market we're seeing today. You'll learn the seven critical steps you should take now to protect your downside... and even how to capitalize on rare opportunities through the whiplash of war, inflation, and the rumblings of a potential bear market. Get the details here.

"The market does not yet understand the severity of what's happening," Dr. David "Doc" Eifrig writes. With uncertainty filling up the market, there's no way to predict how much worse inflation will get. But that doesn't mean we should sit on our hands... Read more here: Why Inflation Will Get Worse From Here.

"It'll get a lot worse from here," Mike Barret says. Inflation won't improve anytime soon. So it's crucial that you prepare your portfolio right now so you can profit off the best inflation-beating assets... Learn more here: Prepare for a New Source of Inflation.

Market Notes
THIS 'BEARISH BELLWETHER' IS SHOWING THE EFFECTS OF INFLATION

Regular readers know we look to certain companies as real-world “economic bellwethers” to gauge the overall market’s health. When these businesses are doing well, it’s a sign the market is strong. However, we also watch for hints that consumers are cutting back on spending. Today’s company is an example of this…

Verizon Communications (VZ) is a $195 billion telecommunications giant. It provides service in more than 150 countries… And it’s the U.S.’s largest wireless network. But as inflation worsens, consumers with less cash to spare are looking for cheaper phone-service providers. In the most recent quarter, among mixed results, the company posted a net loss of 36,000 phone subscribers… while its competitor AT&T (T) added 691,000. And Verizon expects 2022 earnings to come in at the lower end of guidance as well.

As you can see, VZ shares have tumbled. They’re down 20% in the past year and just hit a new 52-week low. It’s another sign that inflation is taking a toll on consumers’ wallets… 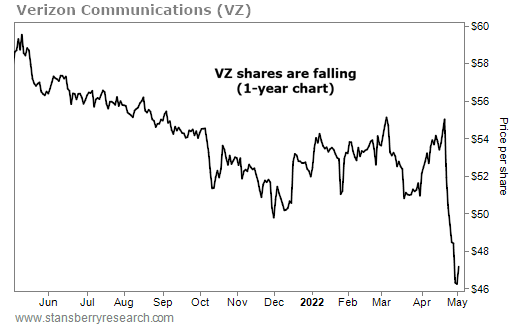