What I Learned From 'Ringing the Bell' in New York
By Brett Eversole
Thursday, June 30, 2022

Earlier this month, on a warm Wednesday morning, I was in Times Square, ready to help open the market for trading...

You're probably thinking, "Why Times Square?" After all, Times Square is a trek from Wall Street. There's no stock exchange there... just a flood of tourists and LED billboards.

Still, if you're ringing the bell for the Nasdaq, that's where you do it.

The Nasdaq MarketSite is right there on 43rd Street. It's the Nasdaq's "commercial" base. And it's also where CNBC shoots its pre-market show Squawk Box.

CNBC anchor Brian Sullivan scooted out of the studio to grab coffee beside us as filming ended. Meanwhile, the production assistant came out to explain how the next 30 minutes would go.

It was a tight schedule... photos, speeches, and then lots of clapping and anticipation on stage during the countdown to the 9:30 a.m. opening bell.

Today, I'll explain what brought me to New York... And, more important, I'll share what it taught me about the future of growth in this tough market environment.

As a kid from rural Indiana, I never expected to get the chance to "ring the bell." But this is the second time I've had the honor of joining in.

The first for me was back in 2018. That time, I went to the New York Stock Exchange ("NYSE")... And it was our friends at KraneShares who invited Steve and me along.

As investors, most of us don't think much about the differences between the NYSE and the Nasdaq. But when it comes to the bell-ringing, you see why the two exchanges couldn't be more different...

The NYSE event happens in the heart of Wall Street. The famous Charging Bull statue is just a block away. And while trading is mostly electronic, there's still a trading floor with guys in vests running around.

You walk up to a balcony that overlooks the entire floor. About a dozen folks crowd onto it to bang the gavel as the market opens.

Going to the NYSE's opening bell in 2018 felt like being a part of Wall Street. We were performing a ceremony... The history and longevity of the institution was something special to take in.

The Nasdaq is special in a different way. It's decidedly "new school." That's what made the exchange a success... It was created to bring hot, innovative growth companies to market sooner than the NYSE would ever allow. And it still shows its modern leanings today.

The Nasdaq doesn't even have a trading floor. That's why the bell-ringing takes place on a TV set. And instead of banging a gavel, you push a big red button.

Here's a shot of me with Andrew Chanin, my host for the day, surrounded by his team as he does the honors. I'll explain the vests and hard hats in a moment... 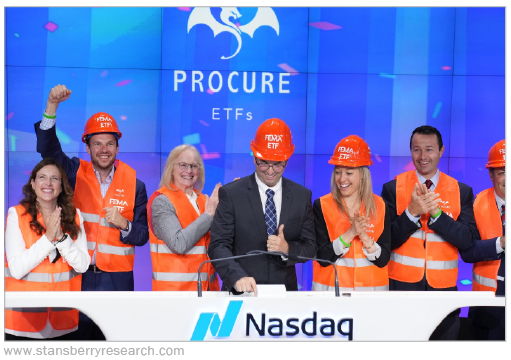 Andrew is the CEO of Procure Holdings, an exchange-traded fund ("ETF") provider. We met years ago and have kept in touch since. Mostly because in the ETF world, he's a true forward-thinker... worthy of the Nasdaq.

In 2014, Andrew came out with the first U.S. cybersecurity ETF. He gave it the catchy ticker HACK.

Andrew launched HACK at his last company, PureFunds. It was prescient timing... Just 12 days after the fund launched, the famous Sony data breach became public. Hackers had looted terabytes of data, salary figures, and even e-mails from top executives.

Suddenly, everyone was clamoring to own cybersecurity stocks. And Andrew had the perfect product for them. HACK brought in more than $1 billion in assets in just a few short months.

So what's Andrew up to now? The orange in the photo above tells the story...

Andrew's newest fund is called the Procure Disaster Recovery Strategy Fund (FEMA). He built it around a different kind of growth-investment thesis...

Over the last 20 years, natural disasters have cost the world $155 billion per year. And the U.S. alone has spent nearly $2.2 trillion on weather and climate disasters since 1980.

With hurricanes, wildfires, and other events becoming both more common and more costly, this is now – unfortunately – a growth industry. And thanks to Andrew's new ETF, anyone can easily invest in disaster relief.

The idea and execution are exactly what I'd expect from Andrew. Heck, a few years back he launched just about the most futuristic fund you'll find... the Procure Space Fund (UFO).

Both of these funds are ambitious and forward-thinking. And I appreciate him inviting me to join in on the fun.

Seeing what Andrew has accomplished – even in today's volatile market – tells me that investment in innovation isn't dead. The folks "making the sausage" aren't quitting... Far from it.

Sure, we're in the toughest market in more than a decade. And the financial media warns that we could see a recession soon. But I can tell you this... Manhattan was as busy as I've seen it in recent years. The number of folks rushing around was a far cry from when I visited in January, as the Omicron variant brought the city to a screeching halt.

Extreme fear doesn't last forever... We know this from the market moves we cover all the time in DailyWealth. But most of all – as I saw firsthand – folks like Andrew are still finding ways to meet challenges and capitalize on the growth trends to come.

Innovation is the bedrock of American life. A bear market won't change that. And ringing the bell this month showed me that making the long-term bet on prosperity remains the right move.

Now, you absolutely should wait for an uptrend before you put money to work. But don't let these tough times turn you bearish for good.

The pain will pass. Innovation will take control. And good times in the investment world will return. It's still smart to be a long-term bull.

"Staying safe in the moment feels more important than making the right long-term moves," Brett says. Many investors are keeping their money hidden today as market volatility remains rampant. But if you stay on the sidelines too long, you'll miss out on the chance to make outsized gains... Read more here.

"Markets tend to bottom when no one is excited about buying," Brett writes. And history shows we could earn massive returns in the long term once the turnaround begins... Learn more here: Stock Market Bulls Have Disappeared.