Some folks trade for entertainment...

With the same mindset that they might sit down at a blackjack or roulette table, they place trades with no expectation of making money.

They just bet and hope.

No goal. No plan. Just action and adrenaline. And more often than not, it leads to losses and letdowns.

That may not describe you 98% of the time. But if it describes you even 2% of the time, that's likely when it will hurt you the most.

As you know, the stock market has plunged recently. The benchmark S&P 500 Index is down roughly 9% from the start of the month. The tech-heavy Nasdaq Composite Index is down 12%.

This is the kind of market action that – if you're not careful – can push you into the "trading for entertainment" category without you realizing it.

Today, we'll show you how to make sure that doesn't happen. To do that, we'll look at one of the most important ideas in trading...

The idea is simple, yet crucial: Plan the trade. And trade the plan.

"Planning your trade" means figuring out your upside potential, defining your exit strategy, and calculating your position size.

Sophisticated traders know that a successful trade isn't necessarily one that makes you money. It's a trade in which you have a good plan, and you stick to it... even if it results in a loss.

Some of the world's top traders have win rates of less than 50%. They don't know in advance which trades will make or lose them money. Their success depends on their process... not on the outcome of individual trades.

That's because if you don't have a trading plan, or if you have one and don't stick to it, you have no way to gauge your success or failure. You're trading for entertainment.

We form trading plans using guidelines that are tailored for our goals...

For example, our primary goal is to generate consistent profits without taking too much risk. So, we'll only buy a stock or fund when we have a reward-to-risk ratio of at least 3-to-1. And if we want to use a stop loss of more than 10%, we typically recommend scaling into the position rather than taking a full-sized position from the start.

Over your trading career, you'll form, use, and refine lots of different trading plans.

The second part of today's idea, "trading the plan," is the part that even market professionals struggle with. And it's where the biggest, most frequent mistakes come into play...

A stop loss is a predetermined point at which you'll sell a trading position if it reaches a certain level... no questions asked. Two of the most common types are "trailing stops" and "hard stops." A trailing stop is calculated as a percentage below a stock's highest recent price. A hard stop is chosen before entering a trade and remains fixed.

Sticking to stop losses is simple in theory... but difficult in practice. When the market is tumbling and your portfolio is showing big losses, the natural human instinct is to sell a few positions – at any price – to stop the pain.

We get it. But here are a couple things to consider...

First, losses usually feel a lot bigger in the moment than they really are. If you use proper asset allocation, even an awful week for stocks shouldn't represent a large drop in your net worth.

For example, if you have 30% of your money in stocks and your portfolio drops 10%, it feels like a catastrophe. But that's only 3% of your net worth. Sure... It's 3% you'd rather not lose. But it won't destroy your retirement or change your quality of life.

It's not a good reason to sell.

Second, when folks make the decision to sell while the market is dropping, they almost always sell the wrong position. They somehow manage to pick the stock that – after they sell it – miraculously rebounds and soars. Their sale marks the exact bottom.

Impulsive selling decisions are based on emotions instead of logic... And they are rarely a good idea. They don't follow any rules. They're not part of a plan. And they'll never allow you to improve your trading.

In short, if you "get up from the table" and cash in just because it starts to feel bad, you're trading for entertainment... even if that isn't your intention.

Keep this in mind during tough periods like the one we're seeing now. Avoiding this common mistake is as simple as following one important idea: Plan the trade. And trade the plan.

If you don't practice this idea, you are destined for a lifetime of frustration in the markets. But once you learn it, you're on your way to regular profits.

Editor's note: Recently, Ben and Drew shared a speculative trade they believe could triple your money in a year. It's a stock in a beaten-down sector that could be setting up for a huge reversal... To learn how to access this recommendation with a risk-free trial of DailyWealth Trader, click here.

"Let's face it – most people don't know when to sell a falling stock," Steve says. Many investors get emotional when faced with losses. Learn how to stop making impulsive selling decisions right here.

"When you have a deeper level of understanding about what you own, it empowers you to make better decisions," Austin Root writes. Check out his simple tips for improving your investments over time right here: Three Steps to Making Sure Your Portfolio Earns an 'A.'

Market Notes
THE FACE OF RETAIL IN RURAL AMERICA

Our colleague Dr. David Eifrig has noted that Americans tend to shop in two ways… Either we get general items from the cheapest possible source, or we go to stores with expertise in a “niche” market. Today’s company has used its specialized focus to build a loyal following…

Tractor Supply (TSCO) is the largest “rural lifestyle” retailer in the U.S. It sells almost anything an outdoorsman or homeowner may need, including riding mowers, sporting goods, livestock feed, fencing, clothing, and auto parts. Tractor Supply has built the best selection for its market. And that creates loyal customers… In the third quarter, the company reported sales of $1.88 billion, a 9% increase over the same quarter last year.

As you can see in today’s chart, this niche business is thriving. Shares are up about 55% over the past year, and they recently hit a multiyear high. As long as rural communities choose Tractor Supply for the goods they need, expect this stock to continue higher… 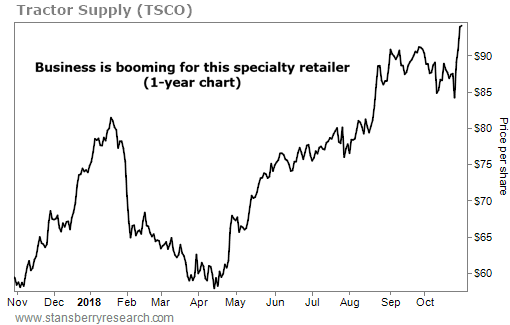