Why Silver Has Never Been a Better Deal Than It Is Today
By Chris Igou
Tuesday, May 26, 2020

In 1991, silver was dirt-cheap relative to gold. Prices for both metals had fallen over the previous year. But silver's fall was much more dramatic.

As a result, gold became extremely expensive compared with its kooky cousin. That value gap peaked on January 29, 1991...

The gold-to-silver ratio hit its highest level ever. And that record stood... until 2020 came along.

Now, that three-decade record has been broken. Gold is more expensive relative to silver than at any time in the past 40-plus years – going back to when gold first started trading freely in the early '70s.

Importantly, this value gap won't last forever. And silver is likely to outperform gold in the coming months as a result.

Gold is the extrovert at a party. It takes the spotlight at cocktail gatherings. It's the star in the precious metals market most of the time.

This isn't a bad thing... But when gold hogs the spotlight, people tend to forget about silver entirely. 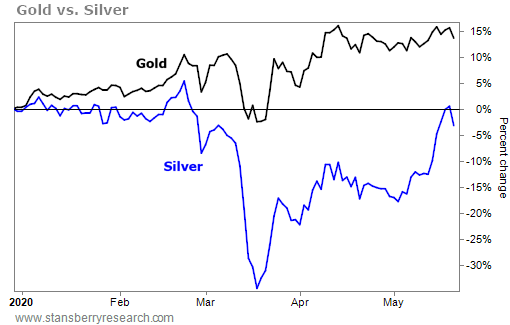 Silver prices are down 3% this year, while gold prices are up 14%. And in recent weeks, we've seen the widest value gap between the metals of all time.

Simply put, silver has never been a better deal, relative to gold, than it is today. The ratio of the two metals broke out to all-time highs in April. Check it out... 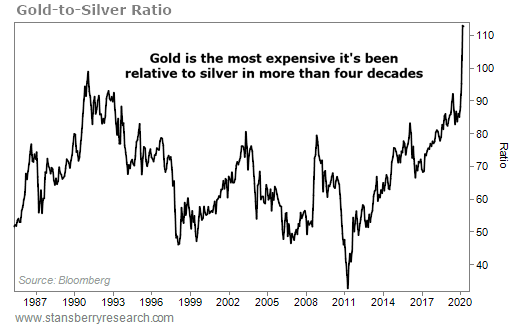 When this chart is low, silver is expensive. And when the chart is high, silver is cheap.

You can see that gold has rarely been anywhere near this expensive compared with silver. It has only happened a few times since 1991. And each time, it led to massive rallies in silver – and major outperformance versus gold.

The first similar instance was when the gold-to-silver ratio peaked in January 1991. For the next five-plus months, silver outperformed gold...

While gold was slightly down from the end of January through June, silver was up 18%. That's an impressive move. But the upside potential can get even better...

We saw another example in May 2003. Gold was again getting expensive compared with silver. And if you had bought silver then, you would have crushed gold investors...

The last time we saw gold's value tower over silver's was in November 2008. And you guessed it... Once again, buying silver when the gold-to-silver ratio was high was the right call.

Today, gold is the most expensive it has ever been relative to silver. And while it doesn't mean gold prices have to fall, it does mean silver is likely to outperform gold in the coming months.

So if you're looking to invest in precious metals, history says silver is the better bet today.

"It has been one of the best-performing assets of 2020," Chris says. Buying after a rally may go against your every instinct. But the rally isn't over yet. And we believe we'll see this precious metal hit new all-time highs as a result... Get the full story here.

"It's a situation you never see in precious metals," Steve writes. For the first time in decades, the supply of gold is severely outweighed by the demand for it. And it could lead to major upside from here... Read more here: "There Is No Gold..."