A frenzy has hit our economy. You need to be big. And you need to get big, fast.

Alphabet (GOOGL) – known for its Google search engine – recently reported revenue growth of 21% to $33.7 billion for the quarter. That's almost as much as chocolatier Hershey (HSY) sold in the past five years.

Media colossus Disney (DIS) is buying the media properties of Twenty-First Century Fox (FOX) so it can build its own direct-to-consumer video service. That's the only way it can compete with streaming giant Netflix (NFLX), which wants to run all of television.

Amazon (AMZN), meanwhile, seems to own (or at least sell) just about everything.

This isn't "empire building," where CEOs try to build huge, powerful companies for the sake of their egos. It's not like the conglomerates that hoovered up unrelated businesses in the 1980s to create phantom "synergies."

The more products and services a company provides, the more visibility it gets from consumers, search engines, and retail stores.

That makes it easier to provide even more... And increased volume increases profits.

Apple reached $1 trillion by selling an amazing consumer product: the iPhone. That wasn't all. The nearly 1 billion iPhone users buy their apps in Apple's App Store. Apple's cut of those sales amounts to more than $11 billion a year. The App Store alone ranks in the middle of the S&P 500 Index by revenue.

Or consider Apple Music. Despite competition from streaming services like Spotify Technology (SPOT) and Pandora Media (P), Apple introduced the service in 2015 to iPhone users, and membership soared to 40 million users. That's worth $4.8 billion in additional revenue.

It's not just about a customer ecosystem, either. It's about data.

Why did Google build Google Maps – a product that now boasts more than a billion users? The company saw that a high number of traditional Google searches were asking about specific places and directions to get there.

Netflix, meanwhile, designs its original programs around the data it collects about users' television habits.

You can't do those kinds of things without millions of users. And if you can combine data from different applications – like maps and shopping – you can figure out even more ways to grow your user base (and profits).

The race to get big is a matter of survival for a lot of these companies. Many of these markets will be winner-take-all, with one big business (or perhaps two) taking the majority market share.

We're not just talking about technology. It's the same with media – like the Disney/Netflix competition. It's the same in finance – with banks collecting bigger piles of assets to lend.

And it increasingly looks like another industry is consolidating.

The question now is... will you get all your health care in one place?

To answer that, let's look at what's gone on in the industry over the past decade...

CVS Health (CVS) has been one of the biggest players. In 2007, CVS bought the PBM Caremark in a $21 billion deal. In 2015, CVS took over Target's pharmacies. Now, the Department of Justice has approved a landmark merger between CVS and health-insurance company Aetna (AET).

That means CVS will control the whole chain – from insurance company to PBM to distributor... making the company a one-stop-shop for all your health care needs.

Some people worry that this type of vertical integration will lead to higher health care costs. Others argue we could actually see lower prices, especially on prescriptions.

Either way, this is a trend that's not likely to slow down anytime soon...

Amazon is working on a new business venture with financial giants Berkshire Hathaway (BRK-B) and JPMorgan Chase (JPM) to lower health care costs for their employees.

And health insurer Humana (HUM) is currently in partnerships with both Walgreens and Walmart (WMT), with rumors swirling about stronger ties to Walmart in the future.

In today's economy, the companies that succeed are the big ones. That's what we're seeing right now in health care.

Investors greet mergers with pessimism. When companies announce these kinds of deals, the shares of the acquirer usually fall a few percentage points on the news.

Knee-jerk reactions can often create opportunities for patient investors who are willing to sort through the facts.

And we're watching for the next chance to uncover another great buy.

Editor's note: Over the past year, Doc and his team have generated huge returns while testing out a powerful new trading strategy. That includes a 167% gain in 80 days... 201% in 45 days... 123% in 13 days... and 79% in just seven days. And if you get started by midnight tomorrow, you'll gain access to Doc's research at a deep discount... Learn how it works right here.

"I've always had the philosophy that the advice I give to readers is the advice I'd give to my own mother," Doc says. Learn more about how he developed a brand-new way to put our favorite investing ideas to work right here.

"When we've got a good stock idea, we can bet on it moving in such a way that we make big gains with a better win rate than straight-up stock purchases," Doc writes. Get the details on how this powerful new strategy can conform to your desired level of risk and return right here: How to Become a Stock Market 'Magician.'

Real estate investment trusts (“REITs”) are easy to understand. These companies rent out real estate, from apartment buildings to commercial properties. Most important, their tax structure requires them to pay out at least 90% of their income to shareholders. That means solid yields for investors…

Just look at Realty Income (O). It owns more than 5,000 properties across the U.S., totaling around 90 million square feet.  Realty Income sets itself apart by renting to high-quality retail tenants… including big names like Walmart, CVS, and Walgreens. Thus, the company maintains a consistently high occupancy rate of around 98%. It also pays dividends on a monthly basis – and it has increased quarterly payouts to shareholders for more than 20 years.

As you can see, Realty Income has returned 25% over the past year, including dividends. Shares recently hit a new 52-week high. If you’re on the hunt for income investments, don’t overlook this business model… 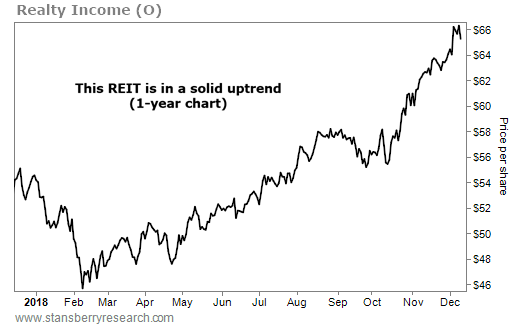