My prediction is that – sometime in the next five years – we will see a 100%-plus move in Chinese stocks within an 18-month period.

I'll share the conclusion with you up front: Last month, the Chinese government stepped in...

It "intervened" in the stock market. It started buying stocks.

This is a good thing. It will likely create a floor for Chinese stock prices...

While the government propping up the stock market might sound crazy, it has happened before in China.

Today, I'll share what happened last time... and what it could mean for Chinese stocks right now.

Specifically, China's Shanghai Stock Exchange Composite Index peaked near 5,200 in June 2015, and then crashed to near 2,900 by late August.

China's government saw what was happening... And it didn't want to sit idly by as the market went into free fall.

First, it cut interest rates. Then, the government made a crazy announcement – for the first time in history, government pension funds would be allowed to invest in the stock market with up to 30% of their assets.

But it wasn't enough. The government needed more ways to prop up stock prices.

So the "plunge-protection team" kicked in...

The government actually started buying. It lent money to brokerage firms so they could buy stocks.

It also banned short selling. And it prevented big holders of stocks from selling shares.

I say "it." But it wasn't one entity... This was a team effort – across government-owned financial institutions. The press calls this group of financial firms the "National Team." And in 2015, its biggest task was to step in and save the stock market.

It took about five months before the Shanghai Composite ultimately bottomed in January 2016 – at around 2,650.

Now, the Chinese National Team is back. And that number is important once again...

The Shanghai Composite has been bouncing around the level of its 2016 low. And it's likely thanks to the National Team that it hasn't busted lower. You can see it on the following chart... 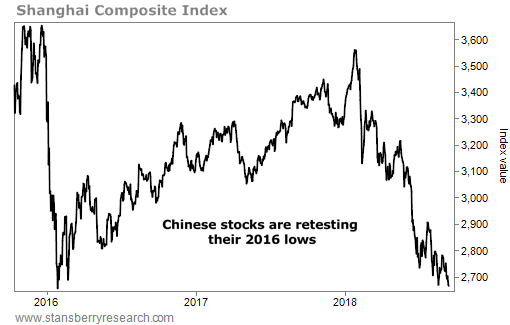 In my opinion, someone important in China decided Chinese stocks were not going to break through the levels of the 2015-2016 crash.

I could be wrong. So we don't want to place a bet that this is the absolute bottom. Plus, history shows that Chinese stocks can fall further even after the National Team steps in.

Again, that's what happened in 2015. Stocks fell nearly 10% from when the government started buying that summer to the bottom the following January.

For now, I recommend you continue to play it safe in China and follow your trailing stops.

I hope that – with the help of the National Team – the bottom is near, and we can get back to making money again. But we need to be smart. I can't in good conscience pound the table and scream "BUY CHINESE A-SHARES!" when the downtrend is still in place.

I strongly believe that sometime in the next five years, Chinese stocks will soar more than 100% within 18 months. That time is not here yet – but it's coming.

So make sure you're ready to buy when the uptrend returns. We could be getting close to a low... China's plunge-protection team is here.

"These Chinese companies are some of the largest in the world," Steve writes. "And they're incredibly cheap right now." To learn a simple way to invest in this opportunity when the time is right, check out his essay: The World's Cheapest Market – And I'm Not in It.

Recently, Steve shared what happened the last time he took advantage of a great China boom – and how he avoided the worst of the bust that followed. He says we should use a similar strategy today... Read more here: How I Plan to Profit in China for Years to Come.

Market Notes
'SELLING THE BASICS' WORKS FOR THIS AUTO-PARTS RETAILER

As longtime readers know, we are big fans of simple businesses. Companies that sell the basics – like pet food, work gear, and HVAC equipment – often make reliable investments because of constant demand. Today, we can see this at work with auto-parts retailers…

Roughly 90% of American households own a car. That’s great news for auto-parts suppliers like O’Reilly Automotive (ORLY). The company has more than 5,000 stores across the U.S. And in America, the average vehicle age is about 11.6 years – a record high. That means O’Reilly reaps the profits as folks keep their used cars running… Just look at O’Reilly’s most recent earnings report. The company increased earnings per share by 38% year over year.

And as you can see below, shares are in a massive uptrend. Over the past year, the stock has climbed roughly 70%, and it recently hit a new all-time high. With Americans driving their cars longer, O’Reilly’s products will likely remain popular for years… 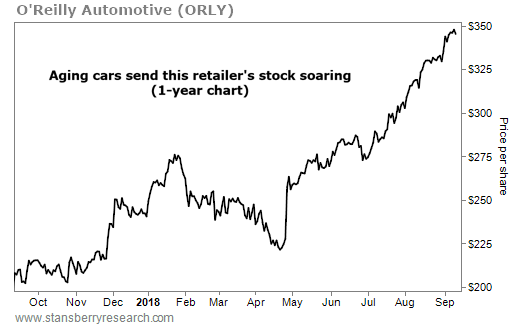