How to Prevent a Bear Attack
By Dr. David Eifrig
Friday, December 21, 2018

"Don't sell the bear's skin before you've killed him."

Sounds like practical advice... but that was exactly what the "bearskin jobbers" did.

Bearskin jobbers were the middlemen in the bearskin trade, back when selling animal skins was a way to put food on your table.

They had some shady practices. They would sell bearskins they had yet to receive. Basically, they would speculate on the future price of the skins, hoping the price would drop in the future. The difference between what they received and what they paid down the road would be their profit.

As you might guess, bearskin jobbers had an unpredictable income stream. Hence the phrase, "Don't sell the bear's skin before you've killed him."

Fast forward a few centuries... Folks gambling in the stock market were doing the same thing as the bearskin jobbers. An investor would sell a stock he or she didn't own and hope to buy it back for a cheaper price in the future.

We know this as "short selling" today. At the time, it was known as "selling the bearskin."

Bearskin jobber was shortened to just "bear," which is where the phrase "bear market" originated.

Or at least that's one popular theory.

You can find a number of theories out there about how the bear and bull markets got their names... but it's important to understand the nature of both if you want to be successful in the market.

By definition, a bear market is a 20% decline in securities prices. During a bear market, investors display widespread pessimism and fear. The last bear market was in 2007-2009 when the S&P 500 Index fell by a monstrous 57%.

And a bull market is a 20% increase in securities prices. Typically, that means widespread optimism and strong investor confidence. Right now, we're still in the longest bull market in history.

Let's look at the characteristics of bear and bull markets. There have only been 20 bear markets and 23 bull markets since 1928.

That's why bear markets sting so much. It's a sharp price drop – with the average drawdown around 40% – in a short amount of time. Think back to 2008... Bear markets cut deep.

There are typically a few phases to a bear market. The first happens during a time of high stock prices and high confidence in the market. Some investors start to get out of the market and take profits off the table... similar to what we're seeing today.

Next, prices begin to fall rapidly. Maybe corporate profits drop, or an economic indicator turns red and investors panic. Everyone is in a mad rush to hit the "sell" button, which pushes prices lower and lower.

For example, you may want to sell your stock for $40 a share, but the stock is trading for $33 a share. You just want out, so you accept a lower price. The downward movement in stocks becomes self-sustaining.

Then, speculators will typically step in, raising prices and trading volume. The market soon hits a bottom, and then a bull market starts.

Stocks roar up as the economy recovers... And the cycle starts all over again.

Today, we're at a crossroads. We're in the late innings of the longest bull market ever. The economy is strong, and up until recently, stocks have been shrugging off market corrections. But investors always have this fear of when the bear will attack.

You need to hold some cash.

That doesn't mean sell everything. But having some money in short-term cash and cash-like investments will save you a lot of heartache when the selling starts. Think money-market accounts, certificates of deposit, and Treasury bills.

Typically, we recommend that as you get closer to retirement, you should start moving some of your investments over to cash. You should start this phase five or 10 years before retirement. And you could gradually grow your cash allocation from, say, 5% to as high as 20%, depending on your goals. If you haven't done this yet, now is a great time to move some money into cash.

Don't worry about having too much cash in your portfolio. Cash can survive a bear market.

But remember, the economy is thriving right now. And bear markets usually only happen when the economy turns. I don't think the bear market is coming today... or even next week. There's still money to be made in this bull market.

But it never hurts to be prepared.

"Thousands of investors have done it before," Vic Lederman writes. "They've lost real money. But you don't have to make the same mistake." In the final stages of this bull market, it's more important than ever to make sure you avoid disaster. Learn more here: This Rule Can Help You Avoid Investment Catastrophe.

"If stocks drop 30%... is your portfolio going to be OK?" Austin Root asks. The historic length of the current run isn't a reason to predict the end... but the run-up also won't last forever. Get Austin's take on how to make sure your portfolio is prepared right here.

As if you needed another reason to mistrust the big banks…

In 2016, financial-services giant Wells Fargo (WFC) admitted to creating more than 3 million fake customer accounts to juice its books. The big bank’s scandal began a cascade of lawsuits, investigations, and fines. The following year, we learned the company charged about 570,000 customers for unnecessary auto insurance…

But Wells Fargo’s troubles didn’t end there… In February, on her last day as chair of the Federal Reserve, Janet Yellen said, “We cannot tolerate pervasive and persistent misconduct at any bank.” With that, the Fed dropped a never-been-seen-before punishment on the company by putting a limit on its total assets, citing its “widespread consumer abuses.” The bank also agreed to remove several of its board members.

After this dramatic, unprecedented move, WFC tumbled more than 25%, recently hitting a two-year low. Until this bank can clean up its act, the Fed’s cap on assets will continue to weigh heavily on Wells Fargo… 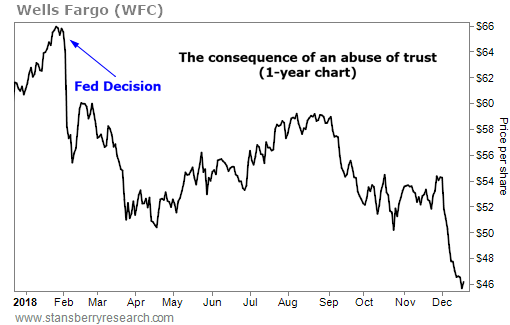