It seems like the absolute worst time to bet on gold stocks...

The Federal Reserve recently announced plans to wind down its bond-buying program. And interest-rate hikes likely aren't far behind.

Gold and gold stocks tend to thrive when the Fed is pushing easy money policies... not when it's taking them away. But even so, we could be on the verge of a major gold stock rally.

That's because this group of stocks recently hit a rare milestone. It has led to winning trades 92% of the time in the past. And history shows that means this typical "dead money" investment could soar from here.

In total, we could see 20% upside over the next year – and that's despite the upcoming Fed-policy changes.

Gold stocks are a risky bet in normal times. Sure, they offer big upside potential. But if your timing is off, you can lose half your investment in a matter of months.

That's because gold mining is a cyclical business. When times are good, they're really good... But the bad times are equally bad.

Knowing when to buy is critical. And today's setup is a clear signal that gains are on the way.

You see, a basket of gold stocks recently rallied seven days in a row. This changes the risky odds of investing in the space – for the better.

In simple terms, it tells us that the trend is up in gold stocks... and that it's accelerating.

Gold stocks bottomed in September. Now, they appear to be starting a new uptrend. And this trend picked up the pace in early November.

We can see this through the VanEck Vectors Gold Miners Fund (GDX). It recently rallied seven days in a row. Take a look... 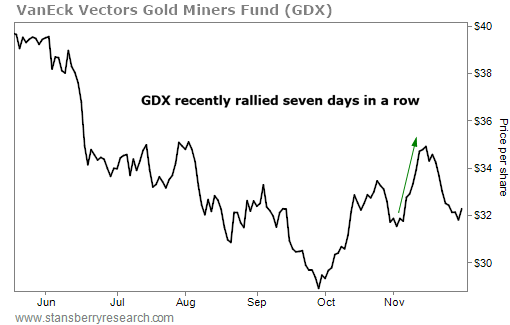 Gold stocks are bouncing back from their bottom in September. They've retreated a bit in recent weeks. But with seven straight days of gains stocked up, a longer-term rally is likely underway.

Since 2006, similar setups have led to big outperformance. Check it out...

Gold-mining stocks have a poor long-term track record. There's no getting around that. Since GDX launched in 2006, you can see the fund has been dead money on an annual basis. But the data shows you shouldn't write this sector off completely...

That's because when a breakout like today's kicks in, outsized returns are likely. Similar cases have led to 7% gains in six months and a 19% gain over the next year.

That's huge compared to the loss you'd expect with a typical buy-and-hold strategy. And it means that big gains are likely on the way for this sector.

That might seem like a foolish bet given the coming changes from the Fed. But again, this signal has a 92% win rate. And that tells me we're likely in the early days of a new uptrend.

Shares of GDX are the simplest way to own gold stocks. And history shows us this fund is a smart bet right now.

"Throughout history, some folks have looked at gold as valueless and worthless," Dan Ferris writes. But that mindset couldn't be further from the truth. In fact, gold is one of the only assets that will never lose its value... Read more here: This Is Why Gold Will Never Disappear as a Store of Value.

"When an investment rallies day in and day out, it means the trend is strong," Chris writes. Even though stocks have been rocky lately, the tech sector could make double-digit gains in the near future... Get the full story here: Tech Stocks Could Soar 20% Over the Next Year.

Today, we’re checking in on a well-known player in the tech industry…

Longtime readers know you can make solid gains investing in what Dr. David Eifrig calls “digital utilities.” Much like how traditional utility companies provide crucial services such as electricity and water, digital utilities provide the necessary technology we need to live and work. And today’s company is one of the most recognizable examples…

HP (HPQ) is a $40 billion tech giant. It’s best known for its computers, printers, and scanners. Folks have needed those devices even more as many businesses and schools have shifted to digital environments during the pandemic. And this increased demand has helped HP thrive… In fiscal year 2021, HP’s revenue came in at roughly $64 billion – up 12% year over year.

As you can see in today’s chart, HPQ shares are thriving. They’re up nearly 90% over the last two years… And they recently hit a fresh all-time high. As long as HP sells the tech we can’t live without, this digital utility should keep performing well… 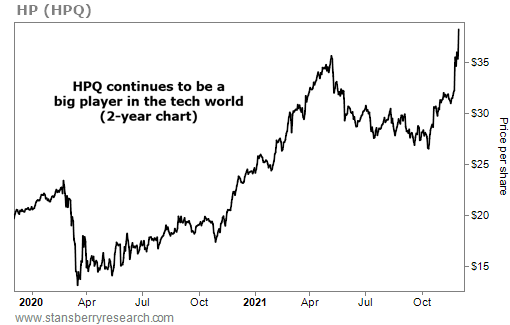