A Major Market Turning Point Could Be Just Around the Corner
By Justin Brill
Saturday, April 28, 2018

For months, our colleague Greg Diamond has been warning about this...

Greg, a former Wall Street trader, has said the first half of 2018 could be a volatile – and potentially critical – time for the markets. More specifically, Greg said his work with technical analysis suggested that we could see a major market turning point this spring.

Unfortunately, there was no way to know if it would be a bullish or bearish event. It could be a top, which would be followed by a significant market decline... or it could be a bottom, which could kick off the "" that our colleague Steve Sjuggerud has predicted.

However, while Greg couldn't predict the outcome, he believed this turning point was most likely to occur in late April or early May.

Of course, that's exactly where we are today... And regardless of your thoughts on technical analysis, you can't deny Greg's forecast appears remarkably prescient so far.

In the past couple months, we've seen stock market volatility explode higher for the first time in nearly five years... the first official correction of 10% or more in over two years... and the market's first "test" of its 200-day moving average since the November 2016 presidential election.

So where do we stand now?

We still can't be certain.

The reality is there is evidence to support both the bullish and bearish arguments today.

Let's start with the negatives...

Regular DailyWealth readers are familiar with our country's debt problems. Corporations, consumers, and even the government itself have binged on record amounts of debt.

The market is historically expensive by a number of common valuation metrics. Whether it's price-to-earnings, price-to-sales, price-to-book, or market capitalization-to-GDP (Warren Buffett's favorite indicator), the market is trading at or near its most extreme valuation in history.

Perhaps most important, the Federal Reserve is now unwinding its unprecedented stimulus efforts for the first time since the financial crisis. The "tide" is officially going out.

And as of this week, we can point to one more reason for concern...

The yield on benchmark 10-year U.S. Treasury notes – which influences borrowing costs across the entire economy – "broke out" above the widely watched 3% level for the first time in four years.

Interest rates have been quietly climbing higher for nearly two years. But suddenly, the market is paying attention. And for good reason...

According to several notable analysts – including "Bond God" Jeffrey Gundlach – this breakout suggests the bull market in bonds is officially over... and rates could be headed sharply higher over the next several years.

Historically, rising rates haven't necessarily been bearish for stocks. But they could be a significant headwind for today's debt-fueled economy. As Stansberry Research founder Porter Stansberry explained in the January 23 DailyWealth...

You can think of the yield of the 10-year Treasury bond as a kind of gas pedal for the price of global financial assets.

The lower it goes, the more gas is being sent into financial markets. But as the pedal rises, those carburetors are getting less and less fuel... and the motor is going to slow...

The resulting impact on financial markets won't be immediate. It isn't direct. But it is, like gravity, irresistible. The Fed's actions and the resulting higher interest rates are going to eventually put a "pin" in the global financial bubble. The clock is ticking.

But again, there are also reasons for optimism...

The U.S. economy continues to grind higher. The tax and regulatory environment  as good as it has been in years. And corporate earnings have been solid.

Meanwhile, several notable measures of investor sentiment are at extremes that typically coincide with stock market bottoms, rather than tops...

For example, the Conference Board – which publishes several widely followed economic indicators – recently released the April edition of its Consumer Confidence Survey. It showed Americans have turned net bearish on stocks for the first time since the November 2016 election.

According to the report, more Americans now expect stocks to fall over the next 12 months than expect them to rise. This may not sound noteworthy, but this type of negative reading is rare. Since the end of the financial crisis, virtually every other similar occurrence has marked a bottom in stocks.

But it isn't just "mom and " investors... As our colleague Brett Eversole explained in Tuesday's DailyWealth, sentiment among investment managers is also sending a bullish message today.

In addition, the market's "vital signs" remain bullish right now. As Steve explained to his True Wealth subscribers in the April issue...

Our "early warning" indicators look just great... No red flags. We've talked about some of these in the past. Looking at key measures in the markets and economy can give us a sense of the bull market's "vital signs."

For example, look at the advance/decline line – one of our favorite early warning indicators. It shows the number of advancing stocks in a day minus the number of declining stocks – in other words, when the line goes up more stocks are rising than falling, and vice versa. Today, this indicator is approaching new highs... 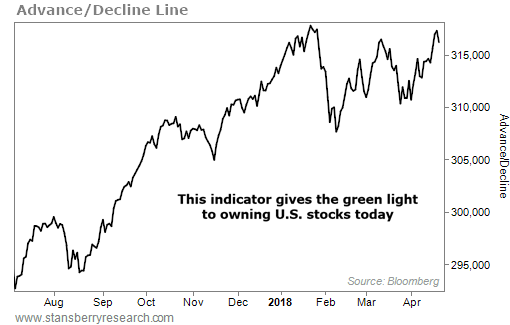 Often, the advance/decline line starts to fall in advance of a stock market fall. It started falling over a year before the dot-com bust in 2000. As you can see today, this is not a problem at all right now.

And again, each of Steve's other trusted early warning indicators to send the "all clear" for now, too.

So at the risk of upsetting thousands and thousands of readers, we'll say it again... There is plenty of evidence to support both the bullish and bearish cases for stocks today.

For now, we remain cautiously bullish. As always, we have no crystal ball. But this bull market has proven the bears wrong numerous times over the past nine years, so we wouldn't be surprised to see it continue awhile longer.

Our advice remains the same. Stay long, but stay smart... Hold some extra cash and gold. Consider "hedging" your portfolio with a few short sales. Be conservative with new investments. And keep a close eye on your trailing stop losses.

Fortunately, if Greg's analysis is correct, we won't have to wait long for the market to "show its hand"...

Like us, he isn't certain which way the market is headed next. But he believes we'll find out within the next couple of weeks. And more important, he says he's prepared to help subscribers of his brand-new Ten Stock Trader service earn big short-term profits either way.

If his quick start is any indication, we wouldn't bet against him...

Late last week, Greg recommended his first trade to "beta testers" of Ten Stock Trader. And about a day later, he closed the position. Folks who followed his advice locked in an official gain of 25% in a little more than 24 hours. Kudos to Greg... And congrats to everyone who has taken us up on the offer to test this service for the first time.

But don't worry if you missed out on Greg's first trade...

You haven't really missed anything (yet). As we said, Greg believes even better opportunities are likely in the weeks and months ahead. And until midnight tomorrow, you can still take advantage of our first ever "beta test" offer to try Ten Stock Trader for yourself.

As a beta tester, you'll get instant access to all of Greg's research and analysis to date. You'll also be notified of new trade recommendations – including precise instructions on exactly what and how much to buy, and exactly when to sell – the moment they're published. Best of all, you'll get it all for up to 85% off what it will cost when we officially launch this service to the public later this year. Click here to sign up now.

Editor's note: In Ten Stock Trader, Greg plans to share as many as 10 setups each week that could help you potentially double your money – or more – every six months. Right now, you can become a "beta tester" at up to 85% less than what others could pay later this year. But don't delay... The offer expires tomorrow at midnight. Learn more here.