This is the scariest economy we've seen since the aftermath of the financial crisis...

Sure, the start of COVID-19 might have been scarier overall. But when it came to the investment world, fear of the pandemic soon gave way to profits.

Today, it's different. We're dealing with a financial monster that folks under the age of 60 have never had to worry about before... inflation.

Inflation is the major economic story of 2022. You'll hear about it everywhere... from the water cooler to your neighbor's backyard barbecue. Everyone's worried about rising prices. No one knows when it will end.

As a result, consumer sentiment is the worst it has been in a decade. But that's not all bad news. This is a contrarian tool that tells us we could be through the worst already.

The University of Michigan has been polling Americans on the state of the economy for more than four decades.

It does this by calling hundreds of people and asking dozens of questions. These cover how folks feel about their personal finances, as well as the economy in the short and long run.

The end result is the Consumer Sentiment Index. It tracks the poll readings every month.

As you might expect, confidence tends to be high during good times and low when the economy is tough or uncertain. The latter is where we are today.

Consumer sentiment crashed with COVID-19 and never recovered. And now that inflation is running rampant, we're at a decade low in sentiment. Take a look... 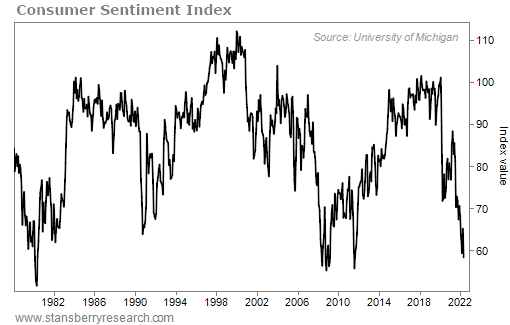 By "normal" standards, it's crazy to think that consumers would be this pessimistic with the unemployment rate below 4%. But the uncertainty of inflation has everyone spooked.

Still, consumer sentiment can be a contrarian indicator. Folks tend to be most afraid when things are at their worst... That's when you've got a great opportunity setting up.

The last time the reading fell this low was in 2011. Double-dip recession fears ruled the day back then. But those fears were overblown – the economy recovered, and stocks soared.

We also saw similar lows throughout the global financial crisis. Again, it was a frightening time. But if you were a contrarian, it was the best buying opportunity of this century.

Interestingly, we saw the lowest reading ever in 1980. That happened just as inflation peaked near 15%. It was a scary time for consumers... But it also kicked off a stock boom lasting nearly two decades.

Today, we're in a similar situation. While it's no guarantee that the worst is behind us, we can see that the average Joe on the street is scared. That's a powerful thing to know as contrarian investors.

I'm still waiting on the uptrend to get back into the market. But once the fear ends and stocks turn in our favor, the upside potential will be huge.

"It's hard to make all the right moves in a crisis," Brett Eversole writes. That's why so many investors are sitting on the sidelines today. But history tells us that we could see a major turnaround from here... Read more here: Investor Bullishness Just Hit a Decade Low.

When the markets are in turmoil, knowing what professional investors are doing with their money is absolutely crucial. Right now, Wall Street is looking for safe, secure assets. But following their lead could be a massive mistake... Get the full story here: The Investment Pros Haven't Been This Scared Since 9/11.