A Two-Year Stock Boom Is About to Begin
By C. Scott Garliss
Tuesday, December 13, 2022

Big gains for the stock market could be right around the corner...

I realize that sounds crazy after the year we've had. With rampant inflation and soaring interest rates, few would think anything good is coming for the stock market – at least, not anytime soon.

The Federal Reserve has said it needs to slow economic demand to get inflation back under control. Its best tool for doing that is raising interest rates. Stock and bond markets have crashed as a result.

But this won't go on forever.

Instead, the Fed's rate hikes could end early next year. And according to history, that'll kick off a two-year rally that could send stocks soaring 30% or more.

A few weeks ago, central bank policymakers were saying they still want to raise interest rates to at least 5% before putting hikes on pause. And investors are nervous about what's to come.

The Fed might have more bark than bite left, though...

Interest rates are already at 4%. That means we don't have too much further until we hit the 5% mark. On top of that, inflation has slowed dramatically in recent months...

The headline inflation figure dropped from 9.1% in June to 7.7% in October. Of course, we're nowhere near the Fed's long-term inflation target of 2%. But if recent trends continue, inflation will be below 5% by March. And it'll almost certainly be below that level by May.

Throughout this year, members of the central bank have said they want to get to a point where they feel monetary policy is weighing on inflation growth. Some members have said we're already there.

So, with inflation continuing to slide, it's time for fearful investors to pay attention...

The Fed won't hike rates indefinitely. It could even take a pause by early next year. And when that happens, it will act as a tailwind for the stock market.

The numbers prove it. We looked at the S&P 500 Index's performance after the Fed stopped hiking interest rates. We covered all of the cycles going back to 1980 – the last time inflation growth was this high.

Here are the total returns of the S&P 500 (with dividends reinvested) after interest rates peaked... 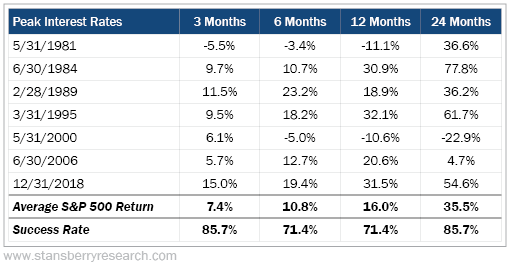 These are massive returns. Stocks jumped an average of 16% a year after rate hikes stopped. And they were up 36% two years after the peak.

That absolutely crushes the historical 9.1% annual gains we've seen in stocks over the same period. This makes sense when you think about it, though...

When investors are afraid the Fed will raise rates aggressively, they want to hang on to their money. After all, higher rates mean the investing environment is fraught with uncertainty. And when money managers are uncertain, they tend to sell first and ask questions later.

So, those money managers raise funds and end up sitting in cash or in "safety" assets like U.S. Treasury bonds... seeking the opportunity to invest it once more. Based on the above results, once they get a sense that uncertainty is gone, they begin to pile back into stocks.

Again, few would expect that such big gains are possible starting now. And it's hard to blame them after a brutal 2022. But here are the facts...

History shows that stocks do well when that happens. A two-year stock boom is about to get started... Make sure you don't miss it.

"We know we can tame inflation and an overheated economy through changes in interest rates," Marc Gerstein says. That's what we saw in the 1980s. Here's how to get ready for the next stock rally as the Fed's playbook kicks in today... Read more here.

Investment pros have been pulling money out of stocks. Recently, they hit record levels of bearishness. We've only seen the pros get this fearful a handful of times – and each time, stocks surged dramatically higher... Learn more about this contrarian indicator right here.