America Is on the Brink of Another Financial Crisis
By Mike DiBiase
Saturday, December 18, 2021

When COVID-19 shut down the U.S. economy in early 2020, the federal government acted fast...

And for almost two years now, it has propped up our economy with massive fiscal and monetary support.

We can argue all day about the size and scope of the support, but one thing is clear...

The government's swift actions kept food on people's tables... It kept folks from being kicked out of their homes... And it kept money flowing into the financial markets.

But these handouts ended earlier this year...

And now, the Federal Reserve has begun tapering its purchases of U.S. Treasury bonds... And this week, it voted to wind down purchases even faster. The government's support is winding down. And that means interest rates are on the rise.

In today's Weekend Edition, I want to discuss the aftermath of all this support...

As you'll see, America is already facing a major problem. It's going to reverse our economic recovery from COVID-19 and risk sending us into another financial crisis.

But fortunately, you don't have to be a victim whenever the next crisis unfolds...

Today, I'll show you a way to protect your portfolio and make money from this coming storm. It involves a wealth-building strategy that some of the world's best investors use.

Pre-pandemic, many Americans were already up to their eyeballs in debt...

The credit-card industry capitalizes on this – by trapping people with low minimum payments.

According to a Fed study, around one-third of all Americans only pay the minimum amount due on their credit cards each month. That's a recipe for disaster...

Minimum payments today average only around 2% of the credit-card balance. By paying only the minimum required, it would take more than 30 years for the average American to pay off a $6,000 credit-card balance... And that's assuming they don't charge another dime on the card over that span.

When you only pay the minimum, you're practically paying nothing but the interest on your debt. That's what the banks want, though... The more you owe and the longer you owe it, the more money they make.

When you get to the point that you can only afford to pay the interest on your debt, you're truly trapped. There's little hope of ever paying it off.

Life happens of course. Prices go up faster than you anticipated... Expenses pop up that you didn't plan for... Or you lose income that you thought was safe.

But there's an important lesson to take from this. When you have too much debt, life's uncertainties will kill your financial future. One mistake turns into a spiral that can lead to bankruptcy.

And everyday Americans aren't the only ones suffering from this problem...

Corporate America has a debt problem, too...

U.S. companies owe more than $11.5 trillion – nearly double the amount leading up to the last financial crisis. And a quarter of all U.S. companies today can barely afford the interest on their debt.

These companies are known as "zombies" because they're like the walking dead... They rely on banks and other creditors to continuously refinance their debt as it comes due.

Today, one in every four companies is a zombie. There have never been more in history.

It won't take much to kill these companies... a recession leading to a decline in sales, higher interest rates, or higher inflation in the form of wages and costs that they can't pass on to their customers.

Granted, not all of these companies will go bankrupt. Some only became zombies because of the pandemic and have already started to recover. Others will be bought by other companies for pennies on the dollar before they go belly up.

But many will go bankrupt.

More than $2 trillion is owed by companies with poor credit. They're considered noninvestment-grade (or "junk") credits... You can think of these companies as subprime corporate borrowers.

A huge portion of this debt will never be repaid.

Ironically, COVID-19 has kept some of these zombies alive longer than they would've otherwise survived. The government's massive, unprecedented response to the pandemic was an unexpected lifeline.

The Fed lowered interest rates to almost zero and promised to buy corporate bonds for the first time in history... That created a false sense of confidence in the bond market. Investors began practically throwing money at companies looking to borrow, including the zombies.

Companies across the board went on borrowing binges...

Stronger companies hoarded the borrowed cash. Meanwhile, the zombies refinanced their debt and pushed their maturities out several years.

All that has done for the zombies, though, is delay the day of reckoning.

Now, all of the government stimulus is causing the highest levels of inflation in 40 years. And the government is now reversing its policies, raising interest rates in an attempt to cool off inflation.

Many zombies won't make it as interest rates rise.

You would think people would be scared of junk bonds today, given how many zombies are walking around...

But it's just the opposite.

Investors are downright giddy for junk bonds these days...

Junk bonds are supposed to pay you the highest rates because they're the riskiest of all debt. And it's even worse nowadays when you factor in inflation...

The "real" interest rate on junk bonds is less than zero today...

This is the interest rate adjusted for inflation. And when you deduct the latest inflation figure – November’s 6.8% rate – the real interest rate for junk bonds is negative 2.3%.

That's right... the riskiest bonds in the universe now yield less than nothing. If that doesn't scare you, I don't know what will.

Junk bonds have never plunged into negative territory before. Take a look... 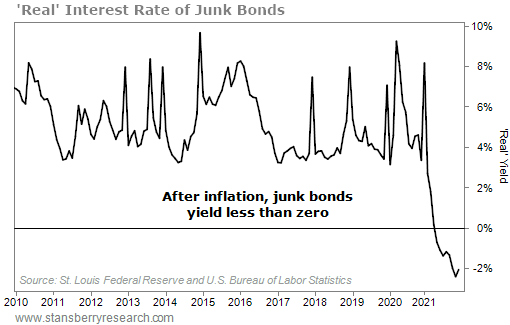 If you own an exchange-traded fund full of junk bonds, I'd get out now while you can.

But don't just take my word for it...

In a blog post from August, he wrote that funds that buy long-term bonds belong in the "investment garbage can." He wasn't even talking about corporate bonds... He was talking about safe 10-year U.S. Treasurys.

I'll come right out and say it: At 1.25% for the 10-year Treasury, they [interest rates] have nowhere to go but up. How quickly is the real question...

If Gross thinks Treasurys are garbage, I wonder what he thinks about junk bonds...

The Fed's recent announcement to speed up the tapering of bond buying in 2022 will cause demand for Treasurys to plummet... And that will lead to higher interest rates and lower bond prices.

If you're savvy, you can use this knowledge to make a lot of money...

The best way to measure the market's view of this risk is the "high-yield credit spread." It's the difference between the average yield of junk bonds and the yield of similar-duration U.S. Treasury notes at any given time.

The high-yield credit spread is measured in basis points ("bps"), and each bps is 0.01%.

In periods of extreme euphoria, the spread falls below 350 bps. It's an indicator that bonds are super expensive – like what we're seeing today. Even risky bonds issued by companies on the verge of bankruptcy are overpriced right now.

On the other hand, the corporate-bond market swings to extreme fear and pessimism when the spread soars above 750 bps. That's when bonds are really cheap. And it's when you can buy bonds – even high-quality bonds – for much less than they should cost... 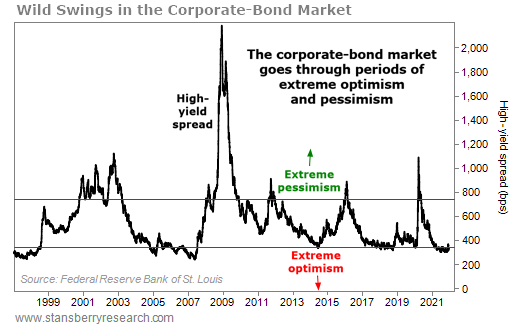 Buying safe bonds at discount prices is a wealth-building strategy used by some of the world's best investors...

I'm talking about billionaires like Warren Buffett... John Paulson... Paul Singer... Sam Zell... and Wilbur Ross. When a crisis unfolds, these guys pounce on the opportunity.

It's a way to make more money than you ever thought possible by buying "boring" bonds.

It's also the strategy that my colleague Bill McGilton and I use in our Stansberry's Credit Opportunities newsletter. We recommend cheap corporate bonds issued by companies that should have no problem paying us.

In times of extreme fear, when the high-yield credit spread skyrockets, this strategy can deliver stock-like capital gains... with much less risk than investing in stocks.

On top of that, you can earn interest rates up to 10% or more.

Most investors have never bought a corporate bond. They have no idea this strategy even exists... So, armed with this knowledge, you're ahead of 99% of all investors today.

When the bond market swings from euphoria to fear, you have to act just as fast...

We saw this happen last year. The high-yield spread briefly spiked from around 350 bps in February 2020 to more than 1,000 bps a month later when the World Health Organization declared COVID-19 a global pandemic.

In Stansberry's Credit Opportunities, we seized the opportunity. The eight bonds we recommended between March and May 2020 produced an average annualized return of 59%.

And all of these bonds were issued by investment-grade or near-investment-grade companies. In other words... they came with virtually no risk that you wouldn't get paid.

If you're worried it's too late to take advantage of the corporate-bond market, you're in luck.

The best opportunities always occur during a credit crisis. Last year was just a tremor... We haven't seen a real credit crisis since 2008. We're long overdue for another one.

As I've discussed in today's essay, we're inching ever closer to that harsh reality... At some point, the "support spigot" will run dry. And U.S. citizens and businesses will be left to survive on their own.

Editor's note: The Fed no longer thinks inflation today is "transitory"... And that has sent investors scrambling for ways to make stock-like gains outside of the traditional market. Mike's Stansberry's Credit Opportunities service focuses on doing just that – identifying investment opportunities that can make you big returns with much less risk than stocks. To learn more about this "safe haven" strategy, click here for more details.