An Invaluable Investing Lesson From My Friend the 'Guru'
By Austin Root
Friday, March 1, 2019

It was one of the first investment principles I learned decades ago.

I try to always follow this guideline... And when I don't, I always wish I had.

That principle is this: When the story changes, we sell.

I learned this lesson from an immensely talented mentor, to whom I will always be grateful. Because he's an intensely private person and would prefer to remain nameless, I'll simply refer to him as the "Guru."

The Guru became a billionaire through investing. And he became equally adept at making money during both bull and bear markets... as well as nailing investing from both a top-down, macro perspective and a bottom-up, fundamental one.

Let me show you how the Guru imparted this lesson on sell-discipline through the following real-world story...

Over the years, the Guru made an absolute fortune investing in footwear maker Nike (NKE).

Early on, he recognized that Nike wasn't simply selling shoes... It was selling aspirations – a chance to be the best. Most important, its brand was championed by the greatest of athletes. Nike knew that to be the "Michael Jordan of brands," it needed Jordan to endorse its products.

The Guru first invested in Nike shortly after it signed Jordan in 1984. Even as late as 1987, shares were trading for less than $0.20 (split-adjusted). Today, shares trade for more than $80. As of last year, the Guru still owned Nike shares, meaning he's sitting on a total return of at least 40,000% from his initial purchase.

But Nike was just the beginning. With this company, the Guru saw a formula for success that he thought could be repeated...

First, identify an iconic brand with leadership that "gets it." Invest early, and then – so long as the story doesn't change – hold on as the stock powers higher and higher. Then rinse and repeat with the next great brand.

So the Guru set out to find the world's future best brands. He spoke with CEOs, investors, and advertising executives... combed through financial data and reports... and interviewed scores of young people.

A conversation with a young man named James in his building's mailroom led the Guru to athletic brand Fila.

At the time, Fila was a small, fast-growing athletic brand from Italy. And in the late '80s and early '90s, its shoes and clothing began to catch on in the U.S. with popular rap and hip-hop artists. By 1993, the company went public.

Fila wanted to use its urban "street cred" to break into the suburban markets the way Nike and Reebok had already done. So in 1994, it outbid Nike and signed an endorsement deal with up-and-coming basketball superstar Grant Hill.

Of course, with the benefit of perfect hindsight, we now know that Hill was no Jordan. But in 1994, many thought Hill could be bigger than Jordan. Plus, he was coming to the market after Jordan had paved the way and made basketball (and sneakers) more popular than ever.

The Guru knew this. So when the young man in his mailroom confirmed that he and all his friends were buying the new Grant Hills, the Guru bought truckloads of Fila shares.

The bet paid off. Hill's first shoe sold more than 1.5 million pairs, which at the time made it the best-selling sneaker launch since the first Air Jordan. And after Hill won Rookie of the Year honors, his second shoe sold even more pairs. Fila's stock surged, going from the teens to more than $100 per share.

But right around the time Fila debuted the "Grant Hill III" third-generation sneaker, the Guru noticed something troubling... Fila's shares had stalled out. When he checked in again with his mailroom source, he was disappointed with what he heard...

"You got a pair of the new Grant Hills, James?" the Guru asked.

"Nah, man. Those shoes aren't any good for ballin'."

"Really? What about your friends?"

"Nah, they're not getting them, either. I bought the new Jordans. My buddies got the new Kobes," James said, referring to the next young superstar, Kobe Bryant, who had also signed with Nike. "The new Nikes are dope."

Deep down, the Guru knew he had heard everything he needed to hear.

The story had changed. Fila had lost its gritty edge, pushing too far into fashion to grab a share of the suburban wallet. As painful as it may have been to give up on his thesis, the Guru knew it was best to sell.

Sure enough, Fila shares began to struggle shortly thereafter. Eventually, James told the Guru that "no one" was wearing Fila anymore, not even the older-model shoes or related athletic gear. The Guru began to actively sell Fila shares short, betting that they would plummet further.

In 1998, Fila's U.S. sales fell 49%. The once-profitable company lost more than $130 million. Shares cratered... falling from a high of more than $100 in 1996 to the single digits. In 2003, vulture investor Cerberus Capital Management acquired the company for a little more than $1 per share.

The Guru shared this story with me as it was playing out in the late '90s. He wasn't trying to gloat, but to convey a powerful lesson as vividly as he could...

You see, investment legends like Warren Buffett have argued that too many investors "trim the roses" and sell their winners too early. The Guru agreed with Buffett – but only to a point. He argued that in certain instances, a long-term investor must sell... like when your primary reason for investing in a company is no longer valid.

It's not fun to acknowledge your original thesis has changed. But it's necessary. As in the battlefield, immediately cauterizing a wound minimizes the damage and eliminates the risk of a catastrophic infection (or huge loss in your portfolio).

That's also why we recommend using trailing stops to stay disciplined... If an investment is working against you to the point that it triggers its stop, you sell. No questions asked.

However, when you recognize that the story has changed before the stock price starts falling, as was the case with Fila... that's often all you need to know.

So while you want to buy and hold shares of world-class companies for the long term... remember that the process doesn't end there.

If the story changes, sell and move on.

"Sometimes, 'holding and hoping' might work for you – by chance," Steve says. "The problem is, 'hanging in there' is not an exit strategy." Learn more about how to set up your investing game plan here: The Biggest Way Investors Screw Up... And How to Avoid It.

"It's easy to get complacent about a stock that has treated you well," Mike Barrett writes. Investors can be irrational about selling their stocks if they get attached – so beware. It could lead you to disaster... Read more here.

That’s how our colleague Dr. David Eifrig describes what the aging Baby Boomer generation means for health care stocks… You see, America has 74 million Boomers. And as they age, more money will flow into health insurance, medical facilities… and the medicine, diagnostic testing, and nutritional supplements they get from companies like this one…

Abbott Laboratories (ABT) is a $135 billion medical company whose diverse portfolio covers everything from glucose monitors, to molecular diagnostic tools, to Ensure nutritional milkshakes. In its latest annual report, Abbott said its revenues have been “positively impacted by demographics such as an aging population” – exactly the trend Doc has been predicting for years. Meanwhile, the company enjoyed 11.6% sales growth in 2018, for a total of $30.6 billion.

As the chart shows, the tailwind for health care stocks has been working for ABT lately… Shares are up nearly 30% over the past year and just hit a new all-time high. As the Boomers keep aging, these gains will likely continue… 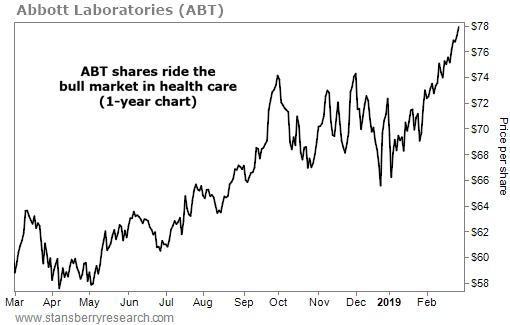