As the World Embraces Clean Energy, This Metal's Price Will Soar
By John Doody
Saturday, January 4, 2020 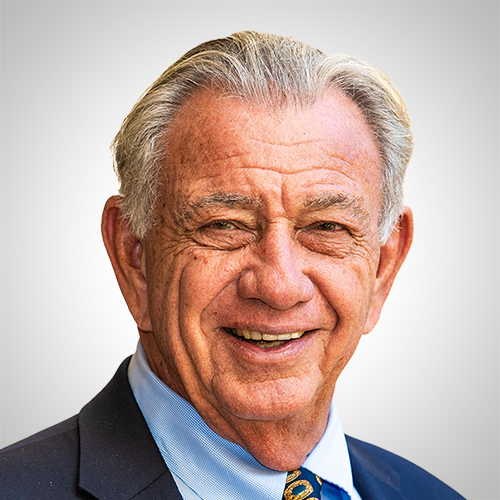 Editor's note: The price of silver jumped about 15% in 2019 – from around $15.50 per ounce to nearly $18 per ounce by the end of the year. But as our colleagues John Doody and Garrett Goggin – editors of our Silver Stock Analyst publication – explain in the Weekend Edition, that's nothing compared to what the future holds for the precious metal...

Imagine cruising along a silent highway.

It's rush hour... yet it's quiet. Although the road is packed with cars rushing to their destinations, one after the other... the only sounds are the whip of the wind and the crunch of asphalt under their tires. No engine rumble can be heard. Quiet and efficient electric vehicles ("EVs") now comprise the majority of all automobiles on the road.

The formerly empty fields to the sides of the highway are now filled with farms of silver-coated solar panels. Air-polluting coal power plants are nearing obsoletion. Shiny photovoltaic ("PV") panels can be seen on most houses.

These visions of a future powered by renewable energy may seem fanciful... but in reality, the world is racing to embrace zero-emissions technologies.

Regardless of how you feel about the science and politics of the climate change debate, governments around the world are pressuring the transportation and energy sectors to "do something" about their carbon emissions. And the industry is responding...

Meanwhile, businesses are finding plenty of environmentally conscious consumers willing to adopt these technologies – even if they pay a premium to do it.

Just look at the EV market... Sales are growing at about 60% a year worldwide. In terms of the total number of cars on the street, the 2.1 million EVs sold every year are just a drop in the bucket of the total global fleet. But the rate of adoption has been torrid.

Research firm McKinsey reported that carmakers around the world were launching 66 new EV models in 2019... and will release another 101 models this year. At the Stansberry Conference in Las Vegas last October, noted short seller Mark Spiegel reviewed the competitive landscape for EVs and took more than 10 minutes simply listing the new models coming out from makers as diverse as Kia, Nissan, Ford, BMW, Maserati, and Aston Martin.

When it comes to investing in precious metals, it's important for you to remember this...

Every one of those EVs hitting the market – as well as the solar panels your earnest neighbor is nailing to his roof – requires silver to work.

The wave of investment going into renewable energy and the flood of products hitting the market is creating huge demand for the metal. Even more critical, as you'll see in this essay, this wave of demand is hitting just as the mining industry is struggling with falling production volumes.

This sets up ideal conditions to own silver stocks in your portfolio today.

Investors often lump silver and gold together as inflation hedges and stores of value. But that ignores one key difference between the two precious metals...

All of the world's gold still exists in bar, coin, or jewelry form. The only demand for gold is for jewelry or investment. On the other hand, silver is an industrial metal. It's consumed in the creation of many products because it's highly reflective and is an excellent conductor of electricity.

Among its uses, silver creates the electrical connections in EV engines. As the market for these cars and trucks grows, manufacturers will need more and more silver contact points for the batteries that power them.

Based on a study by the London Bullion Market Association, a global authority on precious metals, silver demand for the auto industry is expected to increase 246% from just more than 1,300 metric tons in 2015 to more than 4,500 metric tons by 2040. As you can see in the graphic below, the biggest projected growth comes from EVs and hybrid electric vehicles ("HEVs")... while silver usage in cars using internal combustion engines ("ICEs") mostly holds steady. The story is largely the same with solar panels. Silver usage by the PV industry has increased 900% from 10 million ounces a year in 2009 to nearly 100 million ounces in 2018 (see chart below). PV usage should continue to grow as an alternative to traditional dirty coal-powered plants.

The automotive industry will likely continue to be innovative. We're already seeing photovoltaic installations on car roofs to power vehicles. PV paint and perhaps even PV road surfaces might not be too far off. Silver consumption in these uses should continue to rise exponentially. And this surge of demand is coming just as global supplies seem to be drying up...

Most silver is produced as a byproduct of other metals, like copper. Glencore (GLNCY) and KGHM (KGHPF) are large copper and base-metal miners. They also produce large amounts of silver. 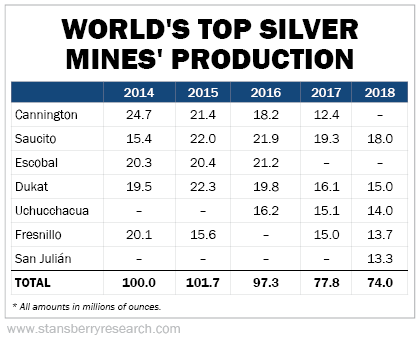 As grade declines, miners must extract more ore to produce the same amount of silver. That cuts profitability. Unless the silver price increases – or someone finds a miraculous high-grade deposit – miners' margins will continue to be squeezed...

Total silver production will likely drop further. A silver supply shortage could result... And as the world's silver is revalued, prices could scream higher. 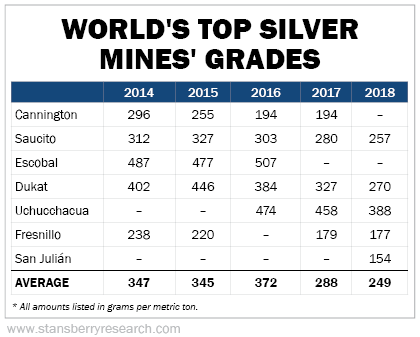 As this long-term trend plays out in the years ahead, you'll want to be involved. That's why we believe you must allocate at least a portion of your overall portfolio to silver right now.

You can buy a silver-focused exchange-traded fund like the Global X Silver Miners Fund (SIL). This silver benchmark climbed nearly 33% in 2019 – more than doubling the return of silver (16%) over that span. It even outperformed the S&P 500 Index, which "only" climbed about 30% last year.

But in our Silver Stock Analyst publication, we've done much better than that... We eviscerated the competition in 2019, finishing with an incredible 103% gain with our handpicked "Fave 5" model portfolio of silver stocks.

You see, our Fave 5 portfolio is leveraged to the price of silver. These mining company equities are valued by revenue, profits, and free cash flow ("FCF"). The miners have relatively fixed costs, which we measure by our all-in sustaining cost ("AISC") metric.

AISC is largely fixed, so when the price of silver rises, so do miners' profits. The typical silver miner measured by Silver Stock Analyst trades at an average of 10 times FCF. So if profits rise by $1, the stock's market capitalization should rise by $10.

For example, in early 2016 – the last time we saw a large silver price increase – silver miner First Majestic Silver (AG) was producing 20 million silver-equivalent ounces a year at $12.50 per ounce AISC. With the price of silver at $14 an ounce, First Majestic was generating $30 million in FCF and was trading for a $500 million market capitalization.

The silver price is determined by the market forces of supply and demand. It's rare to find an opportunity where demand is increasing exponentially while supply (production) is falling off a cliff.

Silver's price move in 2016 was short-lived. But this secular shift driven by green energy that we're starting to see play out right now is unlikely to go away anytime soon.

Silver production is falling. A tidal wave of demand is building. It's just a matter of time before the market wakes up and drives the silver price higher.

And while you will likely do well if you simply buy and hold a silver-focused exchange-traded fund, our Silver Stock Analyst Fave 5 portfolio is the best way to play a rising silver price.

Editor's note: One of the Fave 5 stocks in Silver Stock Analyst is a tiny, unknown company that trades for less than $10 per share today. But the world will soon know all about its prized property – which could become the world's largest silver mine. You only have a few weeks to get in on the ground level before the rest of the investing public. Learn more here.