Back-to-Back Losses Mean This Sector Is About to Rally
By Brett Eversole
Monday, August 8, 2022

One corner of the market is crashing right now. But most investors aren't paying attention...

It's happening in gold stocks. The sector recently lost money for seven straight weeks. And it's down by more than a third of its value in less than four months.

This might make headlines during normal times. But with the entire financial world in turmoil, few folks are interested.

A decline of this magnitude is incredibly unusual, though. And according to history, hefty gains could be on the way.

It's darn rare for a group of stocks to lose money week after week after week. There's almost always a reprieve in the sell-off. Even in long-term bear markets, you'll get relief rallies.

That's based on the Philadelphia Gold and Silver Index (XAU). It has been the gold stock benchmark since 1983. It comprises 30 precious metals miners. And it has fallen off a cliff lately, only recently turning higher. Take a look... 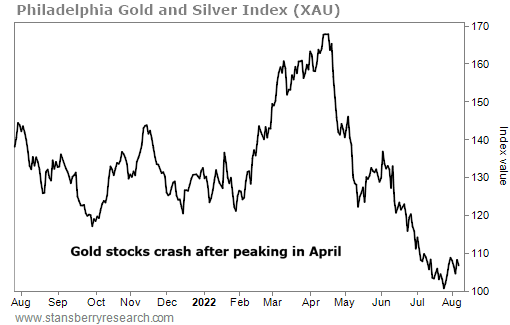 Volatility in this corner of the market is normal. But the index doesn't usually fall this far, this fast.

Investors are focusing on other problems today. And again, most don't care about this gold stock sell-off... if they've even noticed. That's a mistake – because a crash of this size is a huge opportunity in the making.

I looked at each time the index dropped for seven straight weeks. This phenomenon has only happened 18 other times in the past four decades. And it has a track record of leading to solid profits. Take a look...

If you're a long-term investor, ignoring gold stocks is probably the right call. They managed to lose money over the last four decades. And the typical six-month loss was 0.1%.

But as I mentioned, the sector is volatile. That means gold stocks can stage big short-term rallies. And they tend to do just that after setups like today's...

Buying after similar instances led to gains of 7.2% in three months and 12% over six months. These are solid gains in their own right. And they crush the typical buy-and-hold performance.

This outperformance could already be underway. That's because gold stocks bottomed two weeks ago. They're up roughly 6% as I write.

It's too early to say that this is a new uptrend. But if it is, much higher prices are possible. Gold stocks would have to rise another 55% or more to hit their highs from earlier this year.

If you're interested in making that bet, the easiest way to do it is the VanEck Gold Miners Fund (GDX). The simple fund holds a basket of gold stocks. It has gotten crushed lately. But according to history, big gains could be on the way.

"Gold hasn't been this hated since 2019," Brett writes. Gold prices have been falling in recent months, just like we're seeing with gold stocks. Investors are giving up. And this bearish sentiment could be setting up a contrarian opportunity... Learn more here.

Recession fears have crushed another metal recently. It has caused a rare decline – one that's more important than you might think... You see, this metal has an incredible track record after times like these. Find out why it could soar 50% over the next year right here.