The S&P 500 Index is dangerously close to "official" bear market territory – a decline of 20% or more.

But we don't need the 20% threshold to tell us that we're in a bear market. The evidence has been hitting us in the face for weeks...

All the speculative garbage has been murdered. Many tech stocks are down 50% or more. And the S&P 500 recently wrapped up a seventh straight losing week.

Man, it's ugly out there.

Since this is a bear market, it's important to point out that a basic trading strategy everyone has been using for 13 years is dead. It always dies eventually.

Today, I'll show you two reasons why "buying the dips" is smart until it's deadly... 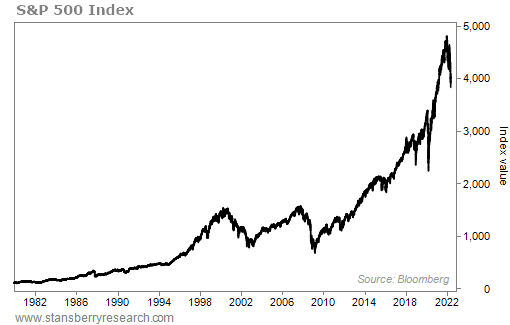 What a ride. And what an incredible run for long-term investors.

However, charts like this one have a hidden problem... The chart makes it look like you can just buy every dip and be fine. But that isn't true.

First, capital invested in stocks near big market tops can generate negative returns for more than a decade.

Except for a brief moment in late 2007, the market didn't surpass its dot-com peak until 13 years later. Anything invested at the dot-com top was dead money for 13 years.

Now, I can hear the first objections already...

"But Dan, people don't really invest that way. If you keep investing all the way through the downturns, you'll earn great returns as you average in at much lower prices."

Really? Are you saying that most folks don't go "all in" at the top?

They sure did this time. As Bloomberg reported in November, people poured more money into the market in 2021 than the previous 19 years combined.

That's the reality of how way too many self-directed investors behave. Everybody going "all in" on stocks is how tops are formed. And once they're all in... there's nowhere to go but down, down, down. 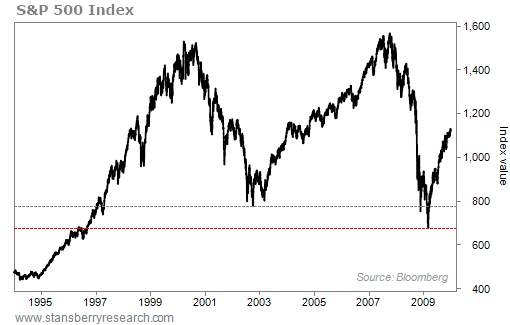 A decade or two of wealth evaporated from the market after fraying investors' nerves for two years. It's brutal. And it's happening again.

But again, I can hear the objections...

"Well, Dan, those moments of epic wealth destruction are just the bottoms on the chart. All you need to do is ride them out and keep buying and you'll be rich."

Yes, that's all you need to do. You just need to be the bravest person among billions. That sounds easy, doesn't it?

Unfortunately, the second item I mentioned earlier ensures almost nobody will do that...

An uncle point is the moment at which an investor can no longer take the pain of watching his investments fall. So he sells for a big loss rather than trying to ride out the downturn.

As humans, we don't like heavy burdens weighing on us day after day. Hence, everybody has an uncle point.

This is harder to show on a chart. But you can see investors crying "uncle" in the volume surges on big down days leading up to big market bottoms...

Look at the Nasdaq Composite Index during the final days of the dot-com bust in the early 2000s. Notice the tall red volume lines that tended to precede the short-term bottoms heading into the ultimate bottom of the dot-com crash in 2002... 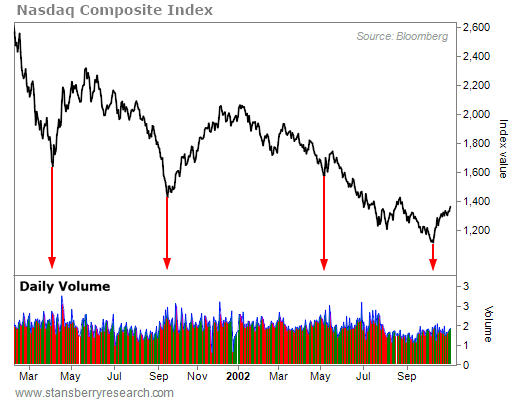 These red lines are investors selling out in a panic, all at once over several days.

They bought the dips as long as it felt good. And they kept doing it right up to the top. Then, they cried "uncle" and bailed out... right near one of the all-time greatest buying opportunities for U.S. stocks ever.

If someone had advised them to behave that way, they would've called the adviser crazy.

And yet, that's exactly what most folks did.

I'm not trying to scare you into selling everything you own today. Instead, I want you to adopt my mantra, which I repeat relentlessly because human nature is to ignore such advice...

Today, that means being incredibly careful about buying into this market. Buying the dips works – right up until it doesn't.

Bear markets are notoriously difficult to predict. But as long as you hold plenty of cash (which you can raise by selling speculative garbage), some gold and silver, and high-quality defensive stocks... you'll do better than most folks.

Editor's note: The threats to your money are hitting faster than ever. That's why we recently combined our best research into a brand-new resource... a short guide to help you protect your wealth (and take advantage of HUGE hidden opportunities) in turbulent times. You'll find techniques, defensive strategies, and actionable recommendations from across our team of world-class analysts... Get the details here.

"The 'buy the dip' strategy has paid off for more than a decade," Brett Eversole writes. But with folks selling stocks and bonds en masse, it's time to rethink our investment plan... Learn more here: Investors Sell Stocks at Record Levels.

"You don't have to look hard to find losers this year," Brett says. As contrarian investors, we're always excited to find cheap, hated assets. But with today's rampant volatility, buying against the crowd could get you burned... Read more here: Sometimes You Shouldn't Bet Against the Crowd.

Market Notes
THIS PANDEMIC SUCCESS STORY HAS LOST ITS WAY

Today’s company has lost its footing in this uncertain economy…

COVID-19 lockdowns sped up many economic trends, like online shopping and streaming. But as life returns to normal – and as folks tighten their wallets due to inflation – some companies that thrived during the pandemic are getting less business. This shift took today’s company by surprise…

Carvana (CVNA) is a $5 billion online car retailer. It allows customers to buy and sell used cars from their own homes. This business was perfect for shoppers during COVID lockdowns. But rising interest rates, recession fears, and inflation have made Americans wary of spending their hard-earned cash. And Carvana didn’t expect the fall in demand… The company bought a record number of vehicles at high prices last year. Now, it’s stuck with them… facing potentially its slowest year since it went public in 2017.

As you can see, shares of CVNA have nosedived. They’re down 90% over the past year… recently hitting a new 52-week low. Carvana enjoyed its time in the spotlight during the pandemic. But it wasn’t ready when shoppers moved on… 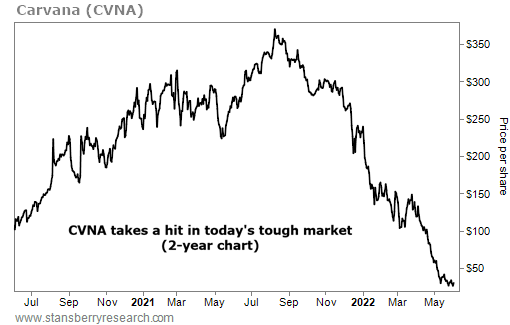