Editor's note: In today's Weekend Edition, we're taking a break from our regular fare to bring you an informative essay authored by our colleague and Retirement Trader editor Dr. David "Doc" Eifrig. In it, he discusses the current state of COVID-19 in the U.S. and predicts how everyday life could change from here...

Everyone's worried about the second wave of COVID-19 and what it will do to our country. But we're getting ahead of ourselves. We're still not out of the first wave yet.

That's a problem because with states opening back up, folks aren't taking the proper precautions to stay safe. And we're seeing that play out in states that took longer to shut down.

Florida now has a surge of cases. Although President Donald Trump declared that every state was under a major emergency declaration, a handful of them never ordered shutdowns. Of the states that did order a shutdown, Florida took the longest time to do so. It was well over a month after the initial public health state of emergency came on March 1.

In the Northeast, states shut down quickly after the state of emergency, averaging two weeks or less in response time. New York, for instance, shut down only 13 days later.

This lag in shutdown times is just one factor for what we're seeing today: areas like the Northeast have passed their peak, but other areas like the South are still in the upswing.

Take a look at this chart from the COVID-19 Tracking Project at the Atlantic... 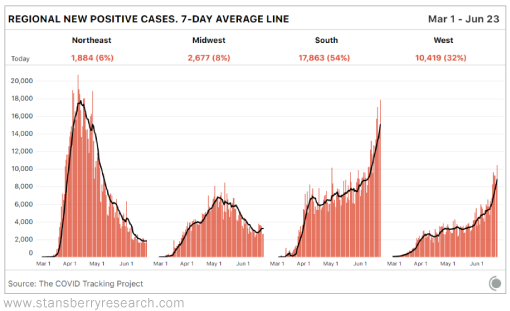 You can see that cases in the South and the West are both still climbing...

As I mentioned, the shutdown timing was just one reason for what we're seeing now.

I've said since February that COVID-19 is likely seasonal. So as the temperatures warmed, it wouldn't spread. I think that's why we've seen the delay in warmer areas like the South. States like Arizona, Texas, and Florida are only just now seeing spikes.

And remember, older folks are much more at risk. Florida still has one of the highest populations of folks over 65.

So even if seasonality slowed the spread as temperatures rose, guess what happened? As summer started in these hot states, folks huddled inside with the AC. That's a breeding ground for an airborne disease like this.

Another important point to keep in mind – overall as a country, we've plateaued in the number of new cases. That's due to the reproductive number. R0 is a measure of the infection rate of a virus. If you're at 1, that means each infected person will infect one other person. If R0 is more than 1, you start to see pandemics. If it's less than one, the virus is under control.

We're hovering around an R0 of 1 right now. Some states are lower – but a majority are higher. Collectively, we have not seen that drop-off, which would signal the end of the pandemic's first wave.

Will we see death rates climb soon with these new outbreaks? Possibly. But that brings me to my last factor: Age. The average age of someone diagnosed with COVID-19 has dropped significantly. That's due to a few things...

In Florida, for example, the median age for positive tests now is 35. Back in March, it was 65.

But we know younger people don't die nearly as much as older ones. In fact, if you look at data coming out of states like Texas right now, you can see that if you're in your 30s, your risk of dying from COVID-19 is about 0.4%. But once you hit age 70, the mortality rate jumps up to 10% and only gets higher from there.

Could we see another surge in places like the Northeast again this winter? It's likely. As I've said this whole time, I think this will wind up being a seasonal virus just like influenza and other coronaviruses.

Will a second wave lead to the same economic turmoil as the first? We'll see...

Editor's note: The news networks are back in fear mode... Thankfully, Doc just posted a quick video update with his full comments on the surge in COVID-19 cases – from a level-headed, rational approach. He also talks about an investment that, despite it all, is actually thriving right now... with returns spiking as much as 400% higher than just a few months ago. The video's only five minutes long, and it's free to watch. Check it out right here.